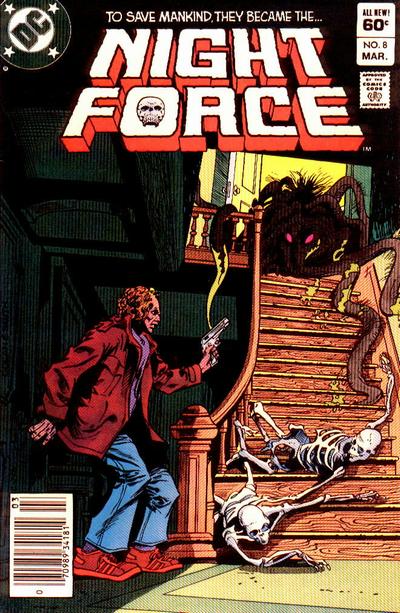 For the most part, Marv Wolfman and Gene Colan take a break from the action and provide a transitional issue, bridging the first story-arc with the next – an ending and a beginning.  Everything gets wrapped up, all of it almost as if Baron Winters had planned it.  Not everything went as smooth as it should have though.  Kaine was not meant to be hurt, at least not as much as he ended up being and the interference that the Baron has been experiencing by the police was definitely not something he had factored in.  Suffice it to say, no matter the hardships that were endured, his Night Force was successful in rescuing Vanessa Van Helsing from the danger that threatened her and in turn, the entire world.  Arriving back home, Jack Gold has figured out that he was but a pawn and that his involvement with Vanessa was staged.  He might not know the extent of it, but he knows that he is now stuck with a woman he has no feelings for and one who is drowning in him with her entire being.  Wolfman does a great job at creating conflict in the subtlest of ways and it is apparent that at some point down the road, Gold and the Baron are going to have it out.  There is a secondary tale in this issue, one that begins just as mysteriously as the first book in the series did.  The main attraction is of course, the Baron.  Though the story is just beginning, Wolfman is never one to rest on his laurels and this new escapade is off to a good start.  Not to be forgotten is Colan, whose pencils continue to dazzle even in the face of the noticeably absent excitement and horror.  The book is a beautiful one and Colan’s artwork bring the story to vivid life as nobody else could do.  A good story and issue overall, but seeing things pick up a little in the next book will be nice to see, should it come to pass that is.  But what of Kaine?  Will he continue to play a part in the Baron’s Night Force now that he is not as complete as he once was?  With questions that need answers and a bit of a cliff-hanger to keep you coming back for more, they help to make Night Force a consistently good book.