Ignoring everything that came before except for the 1954 feature which introduced Godzilla to the world, this movie finds the giant monster out and about without a care in the world.  It is this very fact that provides a constant source of amusement throughout the picture, including that final end scene which is particularly hilarious in an otherwise fairly serious movie.  Even if one were to believe that and if it picks up in real time, that would mean Godzilla has remained unchecked for close to fifty years or so, rampaging where he chooses with nothing standing in his way.  There is a nemesis to be had in the form of Orga for Godzilla to battle, but the answer to this endless wake of

destruction is brought to the forefront by a scientist in the film by the name of Yuji Shinoda.

Shinoda, the founder of GPN – the Godzilla Prediction Network, theorizes at one point that Godzilla is a necessary part of the environment, an essential part even and that is why he must remain alive, much to the chagrin of all those around him.  Ultimately ridding themselves of Godzilla could prove disastrous, at least so the GPN have come to believe.  Eventually this proves to be true as an asteroid is uncovered which then turns out to be a UFO.  Said flying object is unknown of course, including its intentions and yet soon enough it becomes apparent that it means nothing good.  When the army and Crisis Control Intelligence and all they have to bear prove useless, it comes to pass that they realize the only thing they can count on at the moment is Godzilla and hope that he can fend it off.

It is here that the special effects in the movie really come into play and as the two giant creatures battle it out, they look magnificent.  When it came to the creature design, Godzilla had a couple of changes including bigger fins and they make him look far more menacing then they ever did previously.  His foe, Orga, was quite frightening actually, especially when it starts to transform and go through its various stages on its way to assimilating Godzilla.  One of the better scenes from any Godzilla film is the moment when Orga tries to swallow Godzilla whole, like a python or an anaconda.  While you know what Godzilla has to do to escape, the suspense of it all has you on the edge of your seat 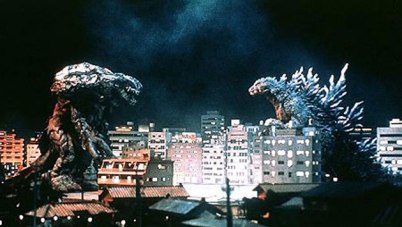 waiting for it and when it does happen, it is everything you had hoped for.

Acting-wise, everyone did a good job and technically the film looked great for the most part, but up until the last half of the movie, it was a little dry.  Part of that was characterization as nobody really seemed to come alive at first and that was a little sad as there should be a strong counterpoint to the giant monster on-screen.  The only person who came close was Shinoda as played by Takehiro Murata, but even then, it should have been a much livelier picture fresh out of the gate.

With Godzilla 2000: Millennium, the twenty-fourth picture in the series and the start of the third era of Godzilla movies from Toho, it did a good job, but was not as vast an improvement over what came previous as it probably could have been.  After all was said and done, it was an entertaining movie and continued to prove that Toho was and is, the king of kaiju films.