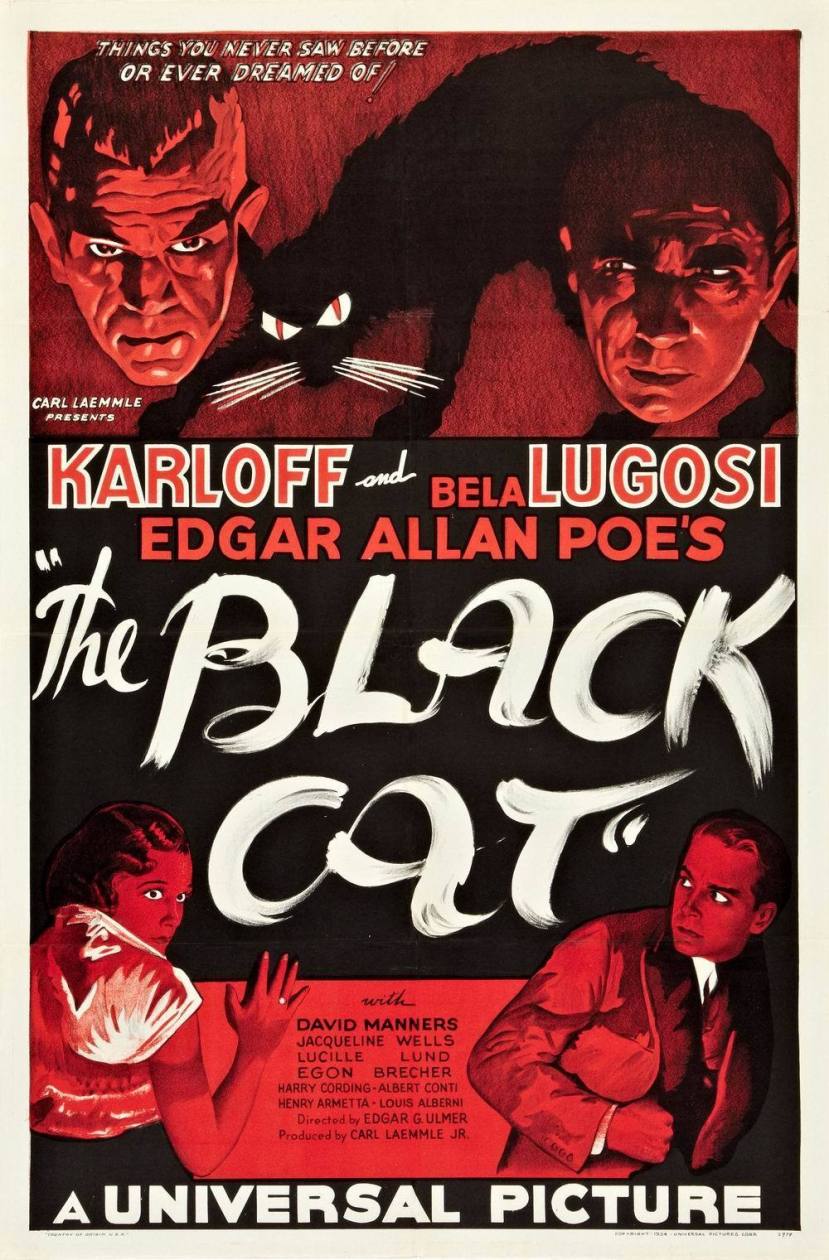 The Black Cat from 1934 would be Universal’s first effort at pairing two of their biggest stars together and it was by all accounts, a success. Those two titans of the silver screen would in fact be Bela Lugosi and Boris Karloff, famous for starring in Dracula and Frankenstein respectively. This particular feature would showcase Lugosi as the hero and Karloff the villain, though even the former’s character would be cast in shades of grey. Additionally, David Manners and Julie Bishop would co-star as a hapless couple that fate would put in-between the two horror icons and luckily for

them, they would make it out the other side relatively unscathed.

Though the film says that it was suggested from a story by Edgar Allen Poe, other than actually featuring a black cat, there is essentially nothing that ties it to the author. That aside, it is a strange beast of a film, featuring all manner of things like torture, a satanic ritual, the taking of drugs and a game of chess between the two leads, not only figuratively, but literally – playing for the life of Bishop’s character Joan. Karloff wants to make her his own so that he might sacrifice her during his next ritual and Lugosi will have none of it. What better way to settle it than playing a little chess? It is utterly ridiculous in theory and even somewhat in execution, but watching the two men play the game is really quite enjoyable. That being said, it is only a drop in the bucket compared to what this film serves up and as it rolls along, moving further towards the end of the picture, you cannot help but find yourself mesmerized by the insanity of it all.

Written by Peter Ruric and directed by Edgar G. Ulmer, they put forth a haunting masterpiece that paints Karloff as a very dangerous man. He is polite and civil and seems like a good host at first, but as the mask falls away, he truly becomes quite the frightening villain. Adding to his portrayal are the various sets that surround him and Universal outdid themselves in that regard. The castle that the companions find themselves in is almost as scary as their host and it really sets the tone for the film once they arrive there. Lugosi for his part does quite a good job as the protagonist. His accent is a little thick at times, but such was always the case and you simply find yourself not even noticing after a while. It was not very often that you found the man playing the hero – his playing Dracula having typecast him as one of the filmdom’s perfect villains. It was good to see and it proved that the man could do it all, but even today – many decades later, you would still rather him be a bad guy than anything else.

For sheer audacity, The Black Cat delivers on all fronts. It might have a fault here or there, but when compared to the greater whole, they matter very little. Karloff is genuinely creepy and having Bela save the day was a nice change-up and it proved that the two men could carry a picture together quite successfully. The two would go on to star in a handful of other films and though all of them would be entertaining to various degrees, this first pairing was a bit of magic.