Issue by Issue – Kamandi: The Last Boy on Earth #41 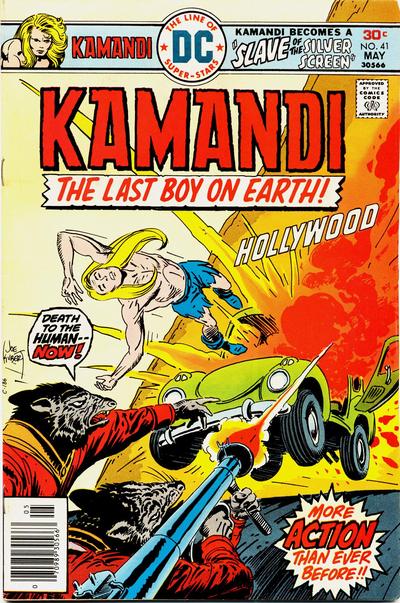 With Jack Kirby off of the book, there were some pretty big shoes to fill and so it is that Chic Stone comes on board and does a fairly admirable job with a style all his own, though one that is slightly similar. Stone delivers the action and there is quite a bit of it as Kamandi, Arna and Doctor Canus come upon the city of Los Angeles, as pristine as it ever was though one that is now inhabited by Rats. What is most interesting about all of this is that these Rats seem to be recreating the Hollywood life from ages ago – making movies, worshipping celebrities and so on. Gerry Conway creates a fascinating little slice of life on this post-apocalyptic Earth, something Kamandi and his companions have not seen upon their travels as of yet. The one thing that is overly familiar to the group is the fact that Kamandi and Arna are looked upon as animals and nothing more. As things become a little clearer with what it is exactly that Mogul wants, Kamandi wants nothing to do with the guy and before he can do anything about it, he is rescued by a very old friend. What is still very evident is that Conway has not lessened Kamandi’s stance on Arna. Even though he might feel a twinge of attraction to the girl, the fact that she and her people tried to abduct him and use his body for genetics is still a sore spot. Arna has been trying her best to win him over, but it seems as if it is to no avail. There are two brief scenes in the book where the author flashes to Pyra to see what she is up to and also to Ben and Tuftan, but brief is exactly what they are and we only get a glimpse to know that for the moment, at least they look to be all right. Out of the handful of issues that Conway has written on the book, this one is by far his very best. He expanded Kamandi’s world and he did not fall on the same tired tropes that were present in his previous stories which as really good to see. The book is left off on a cliff-hanger and it leaves the reader with a question as to why this former ally has made a return because it obviously involves our hero.