At first, it seems like Jason Aaron is taking a spin through Doctor Strange’s past as we see him living the high life like he used to do. He has riches and women and everything he has ever wanted and that is when Strange realizes that things are wrong. He no longer has those particular things to make him feel as if his life is full; he is the Sorcerer Supreme, perhaps a little diluted in power of late, but a sorcerer nonetheless. It is here that Aaron shows us a little of how Strange will regain his standing in the Marvel Universe and that is through the use of new spells being written, which is a smart thing to do as many of the older ones no longer work. Visually, Nightmare is the perfect villain, both man and monster in form and his power is a truly frightening one as it bears his namesake. To affect ones dreams is truly scary, but when you take that power away, Nightmare has little left. It is also in this book that Wong proves yet again why he is such an aide to his master as he and Zelma are able to help Strange break free from his nightmare, though they in turn risked and ended up being trapped in dreams of their own. With an army at his back, Chris Bachalo ends up drawing another fantastic issue and his take on Doctor Strange will most likely go down as one of the definitive looks for the character. He seems younger under Bachalo’s pen, more wide-eyed and still excited by where the magic takes him. Previously, artists have always drawn him as if he was the elder statesmen and while it has always suited the good Doctor, it is nice to see him, for lack of a better word, a little more spry. Baron Mordo is shown once again, though not for very long as Dormammu is a little disheartened with his servant over the fact that Strange still lives and the book leaves off with yet another return from an old foe and this one is a little more surprising than the last few. With all of these villains making their return to Stephen’s life, perhaps this will end up being one of the ways that he gets back on track to reclaiming some more of the magic that he lost. There is nothing better than a little motivation to get one going and these villains are truly that. Not only was this issue exciting, but also a lot of fun as the next one will most likely also be. 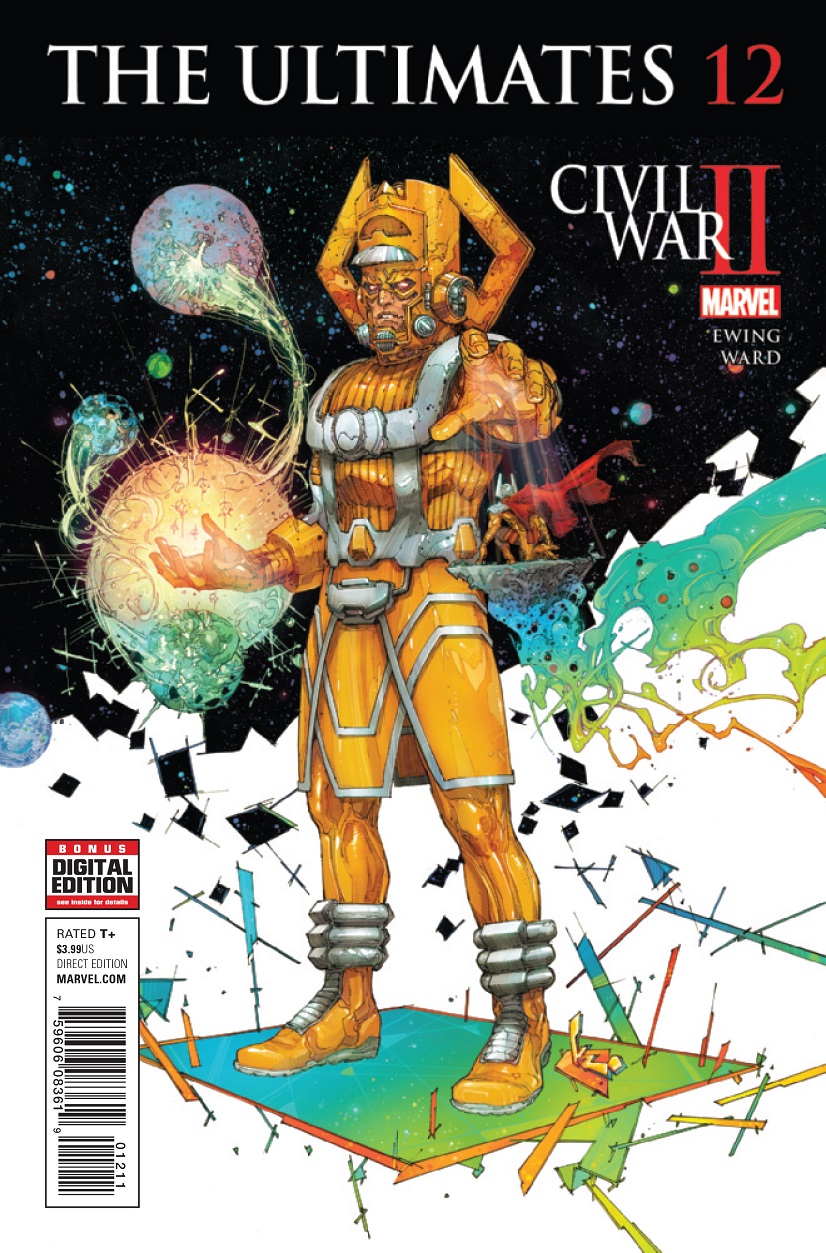 Conner Sims, also known as Anti-Man has escaped the clutches of Thanos and that of the Ultimates and now finds himself travelling through the layers of the universe where he meets the Lifebringer, Galactus. Sims might think his life is over and that he belongs lost where nobody can find him, but Galactus has other plans, that Sims might heed a higher calling. Also due to the recent events that Al Ewing has put the team through, Gyrich and those in charge, have pulled the plug on the Ultimates, more specifically thanks to Carol and her almost zealot-like quest to stop crimes before they happen. The breaking point came when the Black Panther had finally had enough and when he inserted himself as King instead of hero, that was the end. For the rest of the issue, Ewing has Captain Marvel trying to make amends or at the very least, trying to see where things sit with those she considers friends like Blue Marvel, Monica and America. With America Chavez, it is a little more complicated as she does not agree with Carol’s stance whatsoever and to that effect, they take a trip to an alternate universe where Carol’s vision has been taken to the extreme. Will it have done any good? Time will tell, but most likely, nothing will come of it. The near-end of the book has a bit of a cliff-hanger that only die-hard fans will understand as it hearkens back thirty years or so, but it should be interesting to see what Ewing does with it. As for the actual end of the story, Ewing jumps back to Galactus and Connor Sims and gives us a little bit of a surprise, something we have not seen in quite some time and what should also make things a lot of fun going forward. The artwork by Christian Ward is quite different from what we have seen before in this book, but it is a nice change and at the very least, it is consistent, which is always a good thing instead of having a fill-in artist. This is the last issue of this volume, but by no means is it the end of the story as it will continue in a newly re-launched title – for what reason other than a number one is not really clear, but the fact that it is continuing is good enough. A great issue through and through.