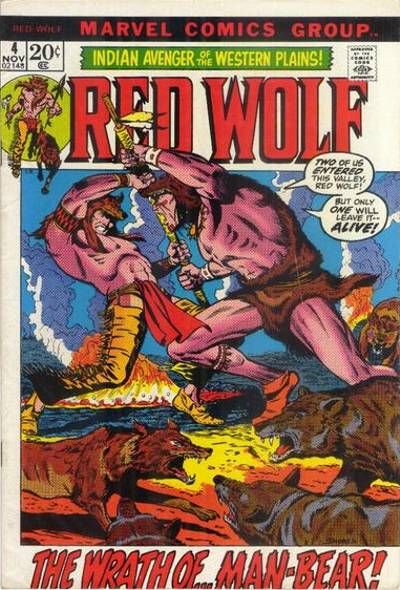 With this issue, Gardner Fox borrows just a little from Burroughs’s Tarzan to give us the story of Ursa – the Man-Bear, a man who just so happens to be a new foe for Red Wolf. On one hand, while you are supposed to think of Ursa as a bad guy because he steals cattle and steers from men both red and white alike, he only does so in the hopes of keeping his bear-brethren from starving. Who would not want to keep their family from going hungry, whether man or animal? Such as it is though, Fox sends Red Wolf out to put a stop to it and in this particular case, there are no real winners because at least one group is going to go without in the end. Ursa is a fearsome foe and Syd Shores gives the man not only an air of menace, but one of strength and power and as it is, Red Wolf finds himself outmatched against the brute. For the first time in this title, Fox gives Colonel Sabre a little characterization, fleshing him out just a little. We see him as a man standing on a ledge between two different, yet similar peoples – afraid to do anything in case he instigates a war. That is not exactly new, but when it finally comes time for the man to give an actual order that involves a little action, he does manage to do so and it is much to Red Wolf’s dismay as this is one occasion where he did not need the Colonel to grow a backbone. Ursa is a fascinating character himself, no doubt due to his familiarity with the previously mentioned Tarzan. It is probably not as farfetched as it might seem for a boy to grow up in the wilds and deprived of human companionship during this particular time period. The bears being involved might be a little unbelievable, but it makes for a good story and Shores really brings it across in his artwork. To make it even more interesting, it also looks like Red Wolf is finding himself in the middle of a love triangle with Molly Brennan and Fawn. A fantastic western through and through, Red Wolf continues to balance both drama and action perfectly to make for a very enjoyable read.