In all of moviedom, you would be hard-pressed to find a more intriguing title than The House That Would Not Die. Sadly, this film is not about a sentient house that eats the people that enter it or any such nonsense, at least not in the way you would think. Over time, houses do gain a personality; they do acquire a life of their own. Many people purchase houses because it has class or character or what have you and that only happens after having been lived in by families or whomever over time. As one might guess, this movie is about a haunted house, one not so bad as say the Amityville

house, but haunted nonetheless and it makes life hard for those that choose to live there.

The latest tenants to move in consist of Ruth and her niece Sara. They love the house and cannot wait to start their lives in the old place. They meet the neighbour as played by Richard Egan who happens to be a professor and soon, the women are meeting the local populace and becoming part of the community. Things are not so peaceful as they should be though, as strange things start to put a damper on their enjoyment, namely Sara and Egan’s characters being possessed by spirits.

Incredible title aside, the film offers very little in the way of actual horror, fright or scares. In part, you have to blame it on being a made-for-television movie as broadcast standards were pretty strict – at least at the time, but other

movies were able to create palpable horror and thus, there is no reason that this film could not have ramped things up just a little bit. That is not to say that it was a waste of celluloid, it was an enjoyable enough way to pass the time, mainly for the acting by its stars Barbara Stanwyck and Richard Egan who were really quite compelling. Essentially, it was like watching an episode of any regular drama seen on the tube at the time – that is how low-key it was, though filled with apprehension and mystery. It is good enough though, that you keep watching as you want to find out just how it is that the ladies are going to solve their little problem and if a film can you keep you parked in front of the television, then it was at least partially successful in accomplishing what it set out to do.

All in all, The House That Would Not Die from 1970 as directed by John Llewellyn Moxey was packed full of tension and suspense, more than you would have thought to be present. It makes up for the lack of horror present, but there are a couple of times that it does present a slight chill down the spine.  There are haunted house films that are far better and if looking for blood or gore or even nudity, you would be best served looking somewhere else. What this movie offers is a little bit of mystery, some fine performances by a very talented cast and a lazy way to spend an afternoon. 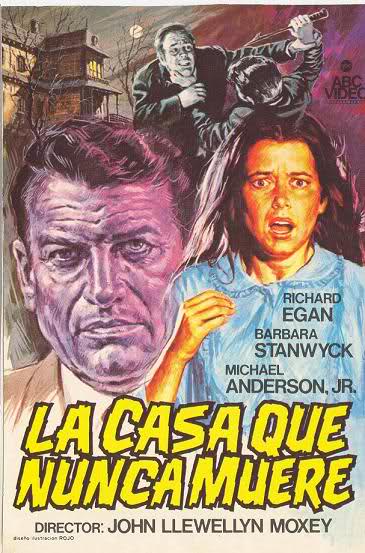