There is not a lot to love about The Beach Girls and the Monster except its camp value and the moments when said monster emerges to kill a few of the surfers. The story essentially concerns a young guy named Richard who only wants to surf and have a good time, quitting school in favour of it and much to the consternation of his father. That particular plot runs throughout the film while girls continuously dance on the beach and a few people get murdered by a Jim Henson reject. This combination of surf film and monster movie should have been much better than it was, but sadly was not. From top to bottom, things could have been improved starting with the theme song by Frank Sinatra, Jr. and Joan Janis.

It was unique to say the least – uniquely bad that is, but quite similar to other surf songs of the time, not to mention the other tracks that ran through the picture at various times.

The script by Joan Gardner was atrocious and to make matters even worse, the actors aside from Jon Hall who also directed and did photography were more than wooden and lacked anything that might have been considered charisma. At the very least, the film looked good and while you could tell it was shot on a zero budget, they made the best of it. Where it really hurt was the monster of the film, a supposed fish from South America that somehow grew and adapted to its current locale looking like a man wearing rags and leaves with a head made from the stuff of nightmares. 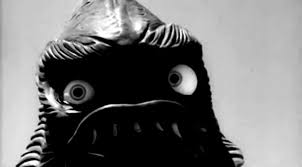 The costume was horrifically bad and to make matters just a little bit worse, the man in said costume had no idea what he was doing and just seemed drunk more than anything else. It was definitely a shoddy production overall, but for some reason, once started, you had to keep watching.  Surprisingly, there was a little twist at the end which did explain the crazy-looking monster, but not enough to redeem the rest of the story.

It is hard to say just what it is that makes a person continue to watch a Z grade film. Is it a combination of all that is bad or that one good thing that makes you think there is a glimmer of hope and that it could eventually turn out to be decent in the end? The Beach Girls and the Monster has both – a lot of bad and a wee bit of good and while there might not be very much to love about this particular movie, there is something present. What that something is would have to be decided by the individual viewer.