Mind Capsules – The Ultimates #8 and Patsy Walker, A.K.A. Hellcat #7 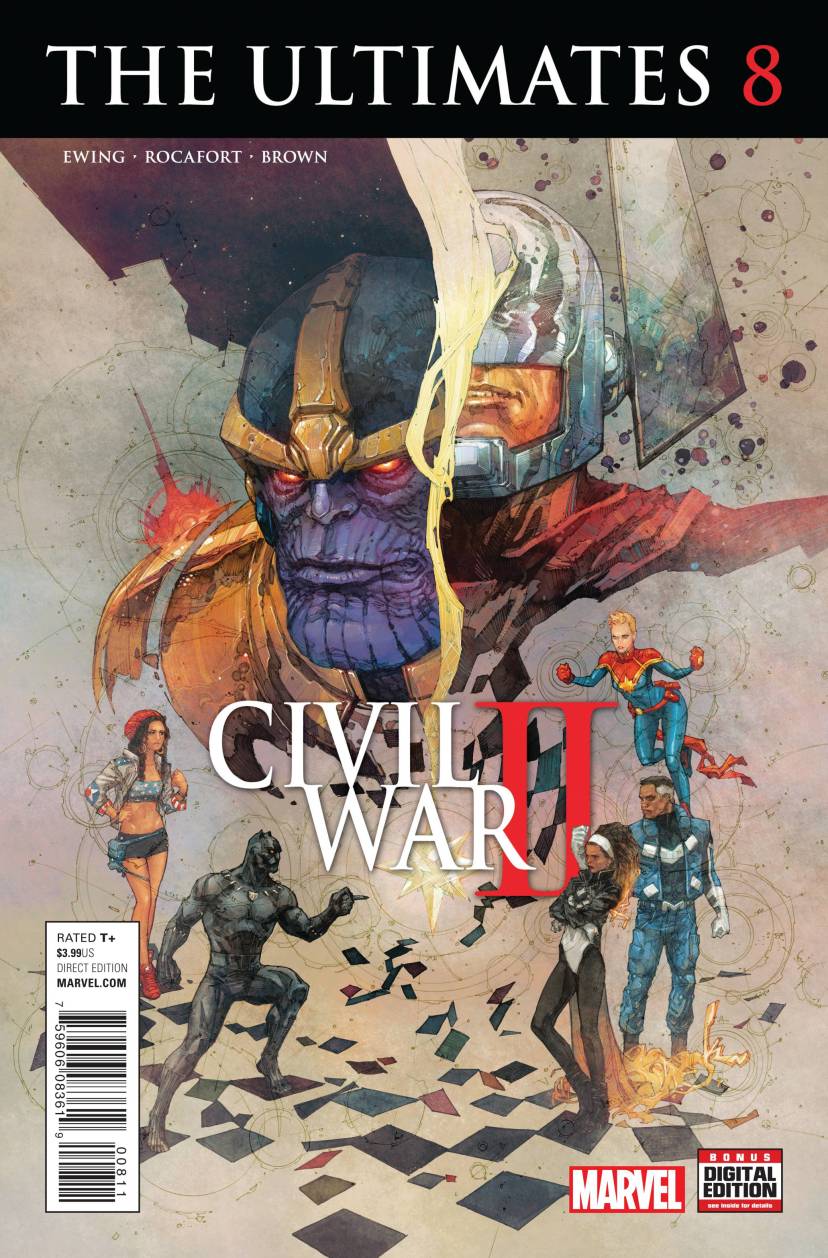 The latest story by Al Ewing and Kenneth Rocafort begins in the past and shows how the latest version of The Ultimates came to be, something which we have not been privy to until now. After that, the book then cuts to the present and to that fateful mission from Civil War II that saw a hero fall and Iron Man go crazy with sorrow and anger. Said mission involves our heroes receiving information about Thanos from the newest Inhuman whom all of this revolves around – Ulysses, a man whose power involves foretelling the future. So it is that Carol decides that the team must act upon the information, for is their mission not to solve those problems which are considered unsolvable with Thanos being one of the largest ones? The rest of the team agrees, especially when it comes to light that Thanos intends to go after the Cosmic Cube that Project Pegasus is working on. The only thing more dangerous than Thanos himself is Thanos with a cosmic weapon no matter what form it might take, be it gauntlet or cube or whatever. The team lays out a plan, one that should have worked and in the end it did, but as with every action, there is always a reaction and Thanos does not lie down for anybody and thus somebody had to pay the price. While Ewing is known for a very witty style of writing, usually peppering his books with a lot of humour, this particular story had none and was of a far more serious tone than anything he has written of late. The great thing about this tale was that it tied everything together, from the beginning where the team gets together and their mission statement, to the end where they are enacting it somewhat futilely against the Mad Titan. The book is quite interesting for a number of different ways, at first seeing the various members meet Carol and discuss their reasoning and recommendations for joining the team then later, as they are already established and even further, after the events of the big battle. There is one scene between Monica Rambeau and Adam Brashear that makes you wonder if it is just the grief or if they really have feelings for each other and a cliff-hanger that makes you question just what the real purpose for Thanos’ visit to Earth might have been. All of that with some incredible artwork by Rocafort, a secret government agency and a good dose of mystery makes The Ultimates a title well worth picking up.

The long feud between Hedy and Patsy over the rights to Patsy’s likeness is finally over with a little help from Jessica Jones. Kate Leth and artist Brittney L. Williams bring the first chapter of Patsy’s adventures to a close and they do so with a few laughs, a little action and some smart lawyering from She-Hulk, aided and abetted by Jessica of course. Up until this point, Patsy’s case was pretty weak as all the evidence seemed to favour Hedy. No matter what she or her friends tried to do, Hedy was able to block it. At first, it simply annoyed Patsy that her mom would have left everything to Hedy, but as time has moved on, it has been getting on her nerves more and more. When Jessica was first introduced it seemed as if she was going to be investigating Patsy on Hedy’s behalf, yet she turns out to be a friend and reveals everything she knows to Patsy which then makes for one of the most enjoyable team-ups seen thus far in the book. The funniest moment in the story had to be when Hedy finally realized that Patsy had won out on a mere technicality and that Hedy would be losing everything to her. To go from a complete air of superiority to one of defeat in the space of a few seconds is always funny to see, especially to someone who likes to lord it over others. It also helps to have a great artist like Williams on the book to give the reader the visuals needed to convey said emotions. From the first, Williams has really defined the style that the title has taken and without her, it simply would not be the same beast that it has become. Together with Leth, they make a great pair and hopefully this relationship continues far, far into the future so that we might continue to enjoy Patsy’s adventures at her very best. A fantastic title in every sense of the word and one everybody should be reading.