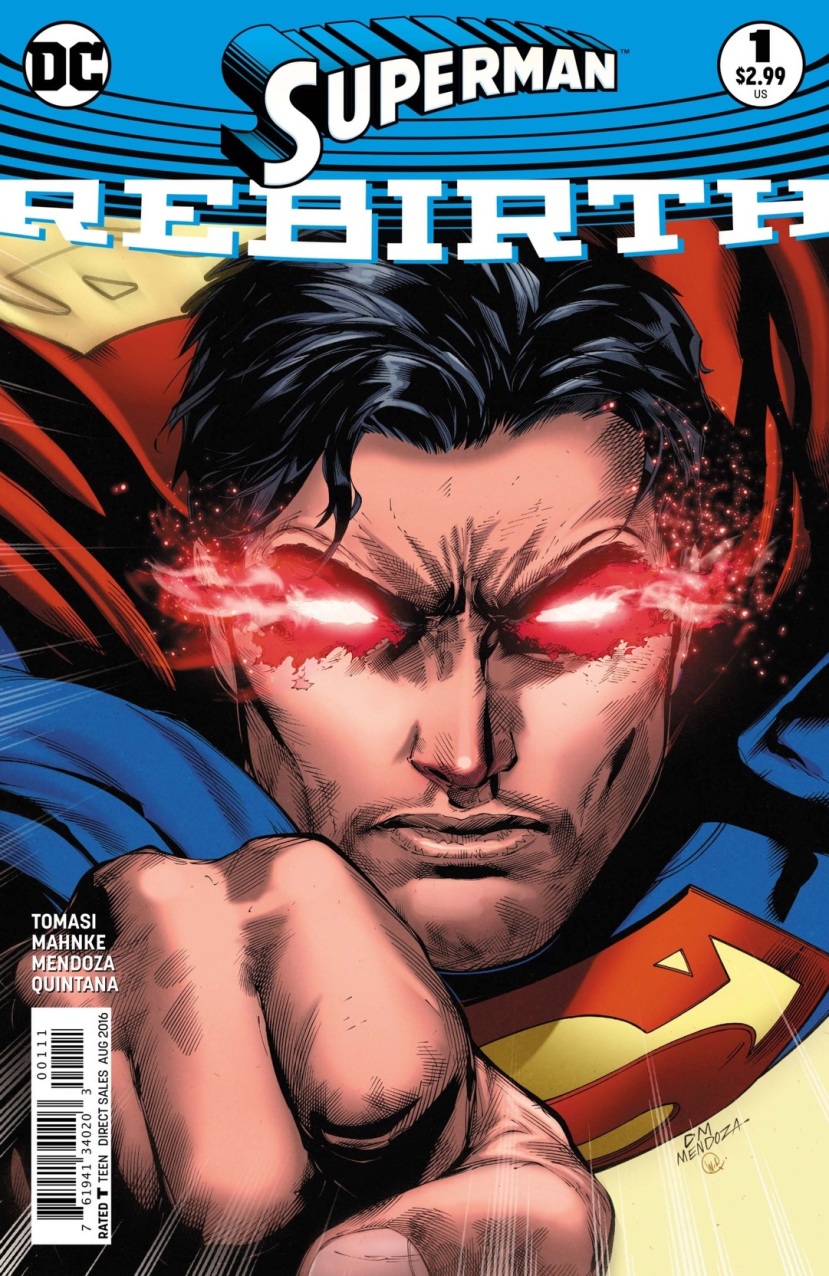 Superman: Rebirth does essentially what it should, serving as a transition piece between the New 52 universe and whatever comes next. It begins in the aftermath of Superman’s death and it finds Superman – the older, wiser and married to Lois-version from the pre-52 universe waiting at Clark’s grave. It also sees Lana Lang breaking into his grave in order to fulfill a promise. Written by Peter J. Tomasi and Patrick Gleason, they do a great job in scripting the book, more specifically the conversation between Superman and Lana. It is a talk that is filled with loss, with hope, with disbelief and a look towards the future. Part of that, however it is that this universe will turn out, is the fact that the world will need a Superman and if it cannot be the younger one, then it will have to be the only one they have left, the hero who is a stranger to many on this particular Earth, but one who is used to doing the impossible and the one who somehow survived Flashpoint. Tomasi and Gleason dedicate a chunk of this issue towards a bit of the pre-52 Superman’s past, specifically that time where he fought Doomsday and died, only to be reborn later. It is a look back at a devastating moment and treated with as much reverence as the medium allows. It also lends towards the reason why Superman is hanging out at Clark’s grave in the first place as he is waiting for Clark to come back to life. He explains all this to Lana when she confronts him about it and despite her misgivings, goes along with him so that he might prove what he is talking about. Doug Mahnke provides the artwork for this issue and does an incredibly solid job of it. If this man is not drawing Superman when the titles relaunch, DC should get him on one of the books immediately as his style is perfectly suited for our hero. While the book does not essentially lay a concrete course forward, it does provide at the very least, a beginning. Where the other Rebirth titles are looking at our heroes in either a different light or giving them a fresh start, Superman is more of a return to form, a very welcome one as well and more than any other title thus far, might be the one to look out for as further developments happen in this post-52 universe. 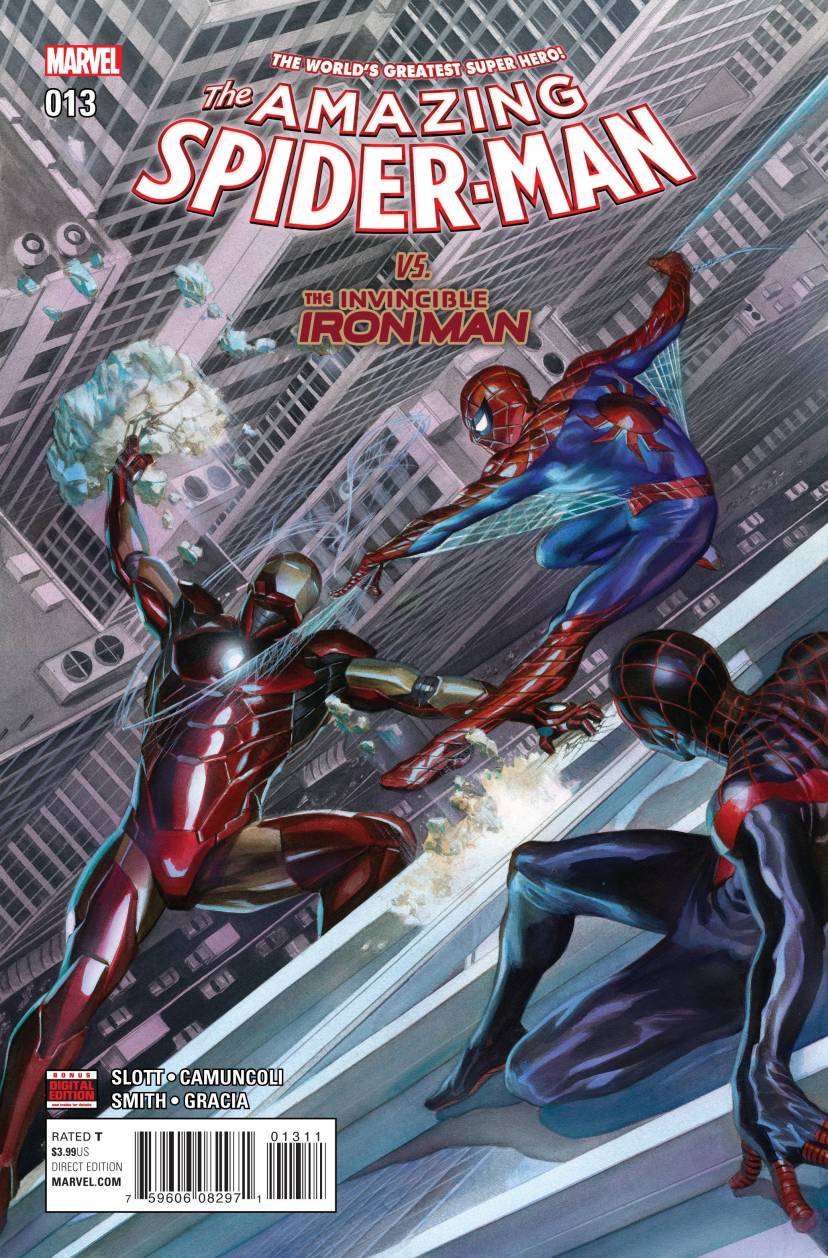 There is a new hero in town and his name is Regent. People love him and they have now started getting used to him saving the day which is a good thing, at least as far as they are concerned. Not all is right though with this man as it has been shown last issue and even more so in this one. Regent has plans – big plans, and he means to accomplish them by any means necessary. Dan Slott, now long-time writer of our web-slinging hero, takes this new hero/threat from his Secret Wars series and drops him into the present and does so with ease and surety, casting Regent in the best possible light, yet providing the reader with a look at the man’s darkness as well. While doing so, we also get a little action courtesy of Spider-Man who is looking for a little time away from the office and the horrors it brings by running into Miles who just so happens to be at the batting cage with Iron Man. Things start out all right, that is until Peter lets his temper get the better of him and Tony fails to keep his mouth in check. So it is that Spider-Man and Iron Man enter into a brawl with each other, more than likely forgetting what they are fighting about after the first ten minutes. Drawing it all in its glory is Giuseppe Camuncoli and Cam Smith who have been doing a fantastic job of it of late. Though Ramos was a good fit for the book, Camuncoli’s work seems a little more polished yet is just as dynamic and a great fit overall. Unbeknownst to our heroes, their fight leads directly into Regent’s plans for the future, plans which include boosting his powers at a faster rate which means he needs more than villains to steal from – he needs heroes. What is a little strange is that Regent would choose to act right under the noses of both Spider-Man and Iron Man. It is a brazen act and one that he may not get away with, so it makes you wonder why he would do so when he could do so as such at a later time, one that is a little better suited to his needs and if anything, a little more discreet. As it stands, things go down and for the moment, there is nothing that Tony or Peter are able to do and it leaves you wanting more by the story’s end. Once again, Amazing Spider-Man never fails to deliver, a constant in the comic book world if there ever were one.