It is just another day in the lives of the newly-formed Avengers, one that finds them taking it a little easy when they are suddenly attacked from what seems to be the Vision. Also arriving quite suddenly is the Wasp, except it is not the Janet Van Dyne that everyone knows and loves, but someone new and she has a close connection to Janet, Hank and the Vision. It is a good thing as well that she has decided to unexpectedly show up because the Vision and the Avengers are going to need her help. Mark Waid’s run on the Avengers has been a little bit underwhelming, that is compared at least to what has come before, but it has been fun exploring the new team dynamic and seeing them gel – the old with the new. Once again, the Vision is front and center and while it has been nice seeing him finally get the attention he deserves, both in this title and his own, it would be nice to see the focus shift a little bit to some of the other players. What is most interesting is the new Wasp, a child from Hank Pym’s first marriage. It is an interesting piece of history that Waid digs up and presents to the reader, something that may come as a bit of a shock, but also a mystery as it now makes you want to know more about just where it is that she came from and if she too will now join the Avengers. Of course, things turn out all right for our heroes with the Wasp saving the day and fixing the Vision in a situation that was clearly tailor-made for her abilities. The book ends with three epilogues, one that ties into the events of Nova’s ongoing series, one that sees the Vision swear that the person responsible for his malfunctioning will pay and another featuring Jarvis, who played a heavy part in this issue which was quite nice to see. It is not often that Jarvis plays a large role in any Avengers tale, but in this one he did and while he did not save the day or anything of that sort, the man is as much a hero and as much an Avenger as any of them. Things are heating up in the book and the future is looking bright for those who are hanging in to see where the title might lead. 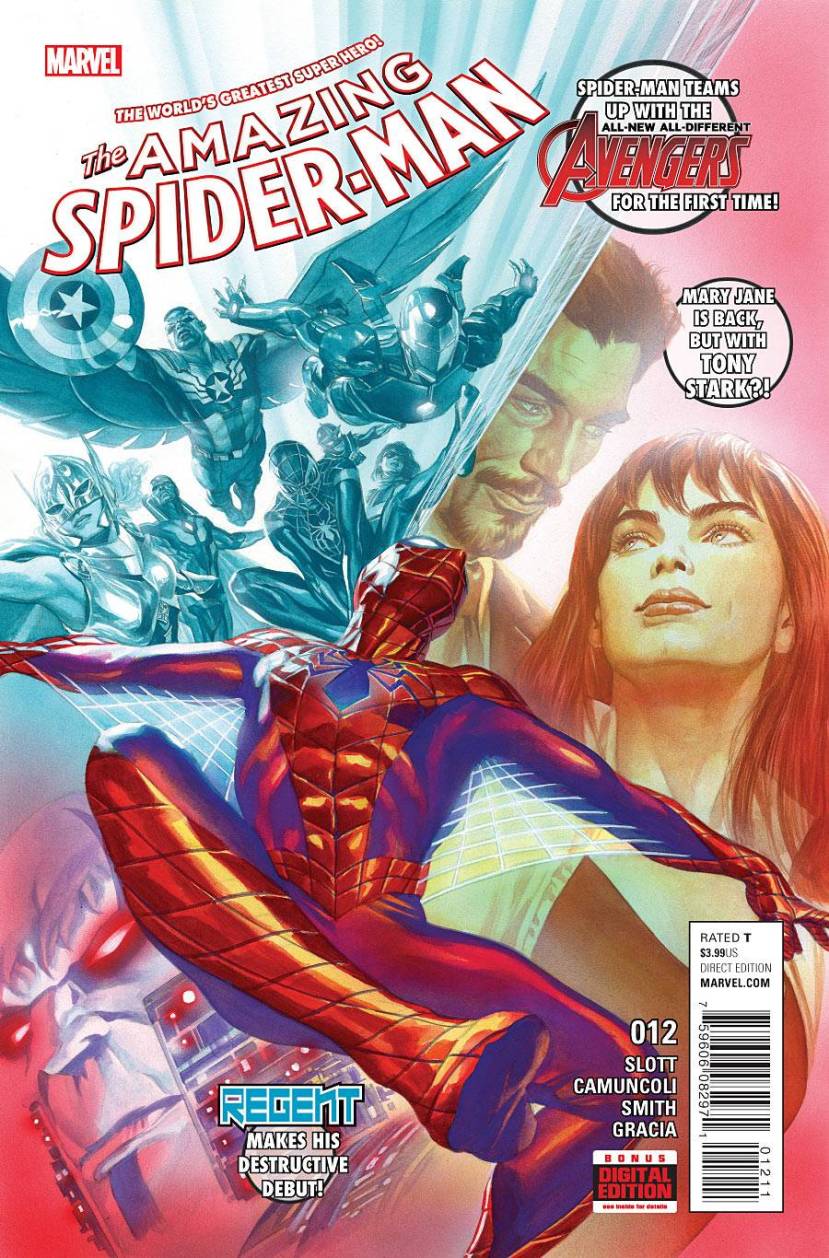 The latest issue of Amazing Spider-Man contains more of the same things that have made it a must-read book over the course of Dan Slott’s run including a lot of action and humour and a couple of surprises to boot. It finds our hero holding a fundraiser with many of his friends, acquaintances and business associates in attendance. Harry Osborn now Lyman has come, as has Tony Stark and his new employee Mary Jane Watson which causes Peter more than a little consternation, as well as Liz Allan and Augustus Roman, better known to those who read the Secret Wars mini-series Renew Your Vows as the power-stealing Regent. The villain of the week in this issue is Ghost who has not been seen in some time, perhaps due to the upgrades he has received as he mentions in the book. While it is nice to see Spidey fight a villain he does not normally battle against, it was the interactions between the various characters and the cliff-hanger ending that were far more entertaining than anything else. The banter between Peter and Tony is always a lot of fun and of late, everyone seems to write them perfectly when together. Seeing Peter learn that Mary Jane was now with Tony, in a professional manner that is, was both enjoyable and slightly embarrassing in a way as he had absolutely no idea what MJ had been up to of late. The fact that she now works for Tony also rubs him the wrong way a little more than he would like. Surprisingly, even Harry and Liz get a few moments of characterization in the book and it is nice to see some of Spidey’s old supporting cast make their way not only back into the book, but back into the collective consciousness of those who read the title, though Harry has been present for brief moments previously. The most interesting thing that Slott does is start to introduce Regent more fully and setting him up as the next big threat that Spidey will eventually have to face. At the moment, he is not the souped-up monster that he was in Renew Your Vows, but you can see that he intends to be just that if he gets his way. With more than a little help from Giuseppe Camuncoli and Cam Smith, the Spider-Man family’s flagship title keeps on being as good a read as it ever was.