Due to recent events, the team has been left in a bit of a shambles with Wiccan, Hulkling and Squirrel Girl the only members left. Hawkeye is on the outs with both Roberto’s team and with S.H.I.E.L.D. and is more than a little angry, partly because it was his own fault. Those who are not with Roberto feel a little lost and unsure of what to do, but when the Plunderer shows up, they all have something in common to band around. Despite the somewhat dour moods of our heroes, the book still ends up being quite humourous thanks to Al Ewing, wordsmith extraordinaire. Back on the title is Gerardo Sandoval who brings his incredibly energetic and exciting pencils with him and it is a welcome return indeed. So it is that our heroes all come together to take down the Plunderer, a villain that Squirrel Girl could handle on her own and who by chance is more excited than anyone to face off against the man. With them is Songbird, supposed betrayer of the team for being a double-agent with S.H.I.E.L.D. and none feel more hurt about it than Clint who has worked with her in the past and who was a S.H.I.E.L.D. agent himself. The great thing about this book is that everything is not always what it seems, especially under the leadership of Roberto da Costa who always has a plan up his sleeve. Aside from the very funny action that goes on, there is also a little drama having to do with Billy and Teddy who are visiting with the Scarlet Witch during their downtime. They get a little talking-to, specifically Billy, about the choosing of a superhero name for himself and of getting married. The guys do want to get married but things just tend to keep popping up and getting in the way, not to mention they are still living with Billy’s parents and are flat broke. The standout in this book when all is said and one is Doreen though, who just makes everything and every scene, no matter how bad the mood or situation, pretty good. With fantastic artwork and a story to match, New Avengers keeps on being the best Avengers book to bear the name. 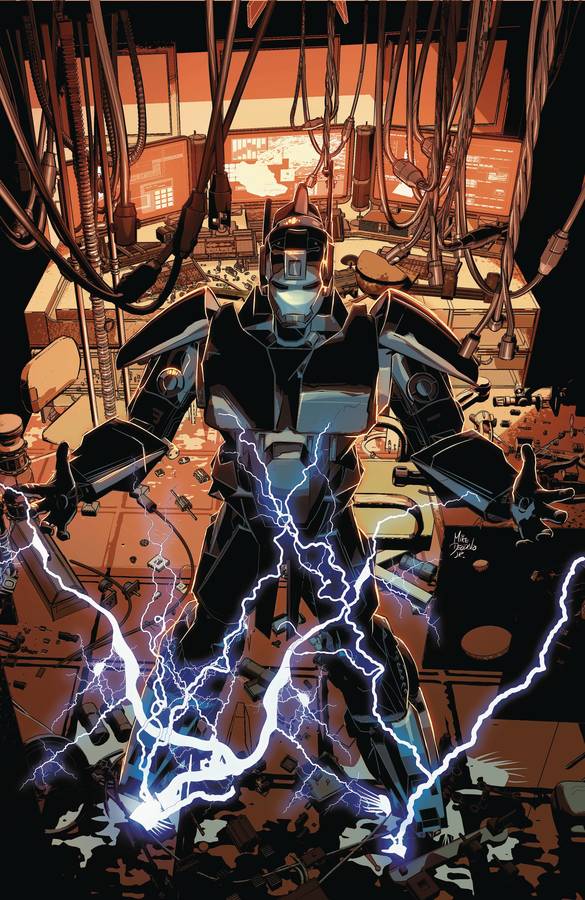 Iron Man is missing and has been so for four weeks. People are worried including his new girlfriend, the shareholders of his company, Friday and even Dr. Doom. Most tend to agree that while Tony has disappeared before, there is something different about this particular time. Someone always knows where he is or he at least leaves word. This time there is nothing and it is a mystery that Brian Michael Bendis weaves for the reader until the reveal come the end of the issue. One thing that you can gather outside of all that is going on is that something must be up because when Bendis left off on the last issue, Tony, Rhodey and Spidey were all essentially doing fine and this issue finds Rhodey on the hunt for his best friend. So if Rhodey got out of whatever predicament he was in, you would normally assume that Tony must have as well. Bendis plays up the mystery angle pretty hard during the course of the issue with nobody seeming to have a clue. One notable scene involves Friday’s encounter with a board member. At first he thinks she is just a glorified messenger service, but then soon comes to realize that maybe it is she that is running the company in his absence and by the look on his face, you can tell that with that bit of information coming to light, nothing good will come of it. Another and perhaps even better scene involves everyone’s favourite Latverian having a little conversation with Amara, Tony’s latest beau and while it seems innocent enough, you get the feeling that there is something a little underhanded going on, a sinister current running underneath the talk between the two. Doom keeps mentioning the fact that she should begin human trials on her Alzheimer’s drug and in the end, she agrees which as you can guess, will leave her in his debt. Whether he has really turned a new leaf or if he is going to use this against Tony at some point in the future, one can only wonder. Once again, Mike Deodato graces the book with his sumptuous pencils and it proves that he and Bendis make one of the better writer-artist teams in the business, still going strong after many years. This may not have been the most exciting issue, but it was intriguing and it should be fun to see where all of this leads.