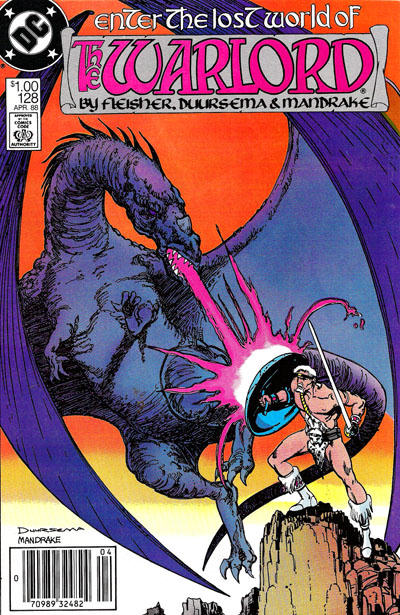 With the continuation of last issue’s story, Michael Fleisher presents its conclusion in a very unique way, at least as far as this book is concerned. Instead of just telling us this tale in the usual third person perspecitive, it is instead told from that of the victim, which in this case is the dragon that Morgan and Dreadnar have been hunting. There is little dialogue during the main plot and the story does cutaway to Jennifer who reminisces about Tara and to Mariah and her misfortunes, but for the most part, it is man versus beast and you cannot help but root for the dragon to end up victorious in the match. The story is an emotional one as both man and dragon fight for what they think is right, for the deaths of their respective tribes at the hands of each other and it is a fight with no quarter given. Morgan is essentially a spectator in it all, though he does try to help, but when it all comes down to it; he has reservations about just what is going on. As a whole, the book is packed with excitement as both of the major plotlines represented within reach their conclusion. Mariah has not had an easy time of it being in the hands of her countrymen who think her a traitor. Various kinds of torture have been used against Mariah and when a chance comes for her to escape with another inmate, she is only too glad to take it. While staying in the prison was fraught with peril, her escape through the snowy wastes is no less so and soon she and her companion are being hunted by the soldiers who imprisoned them until she finally comes to a place that she recognizes and truly makes good on her mad dash to freedom. A truly fantastic issue as written by Fleisher and brought to stunning life by Jan Duursema and Tom Mandrake that makes you wish every issue could be as good as this one.