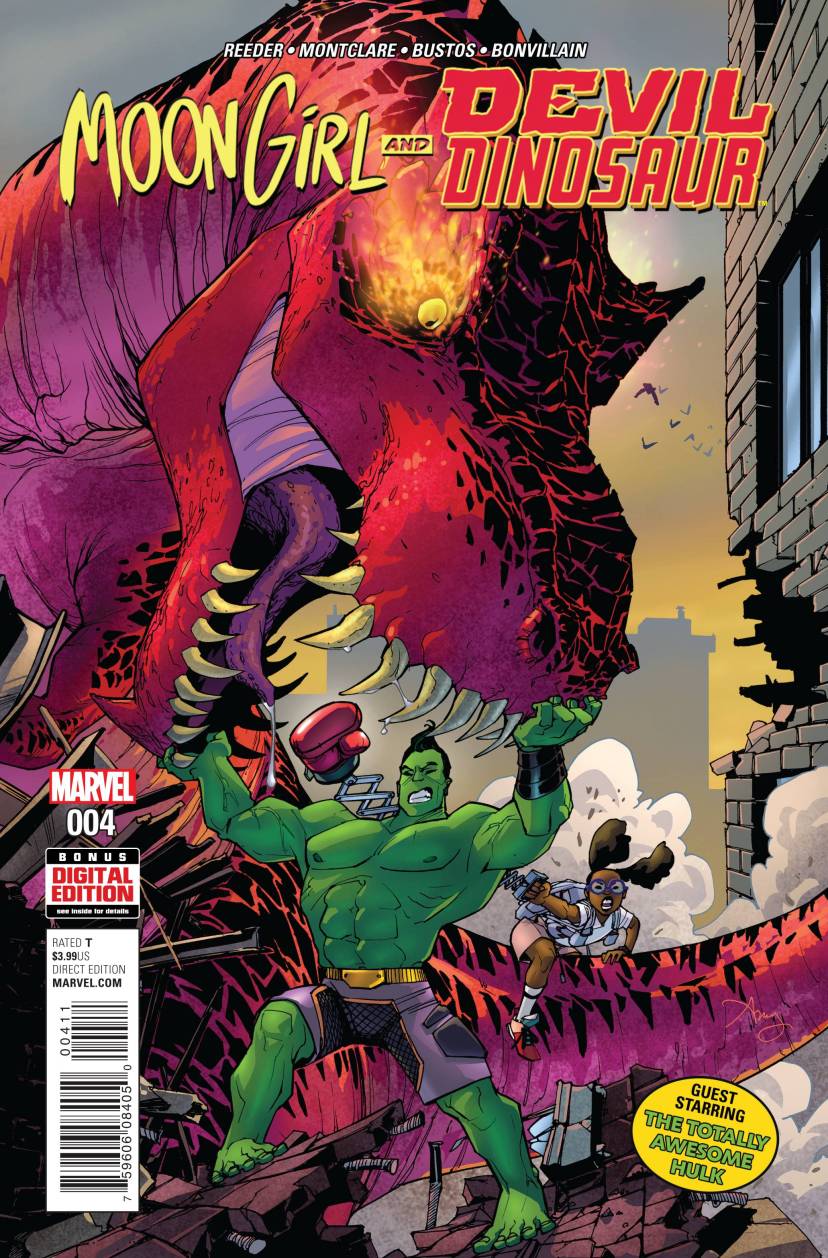 With last issue’s finale, it promised a main event involving the Totally Awesome Hulk versus Devil Dinosaur with Lunella right in the middle of course. More accurately, you could probably say it turns out to be Lunella against the Hulk as the issue mainly sees her browbeating our hero, trying to get him to leave her and Devil alone. Amadeus cannot seem to understand why Lunella is protecting Devil, as it seems to him that Devil is just a big red monster that has been terrorizing the local populace. As it goes on, you can feel the frustration coming off of Lunella in waves as she argues with the Hulk and in the end, you know that it can only finish one way. Brandon Montclaire and Amy Reeder have been crafting a very fun tale in line with Marvel’s other humour books at the moment including Patsy Walker, Squirrel Girl and Howard the Duck and though it does not have any outright laughable moments, it does bring a smile to your face with each turn of the page. Lunella has turned out to be a very likeable character, one who feels very misunderstood which is something anyone can relate to while Devil is Devil and has no idea what is going on though he knows that the Hulk is not here just to have a chat. The best part about the all-new Marvel is that they are willing to take risks with one of them being this very title. Seeing Devil Dinosaur in a title in this day and age is something you would never have thought to see and so it makes this book something of a minor miracle. Natacha Bustos does an incredible job on the artistic front, providing an air of innocence around it all and truly making it not only look, but feel like an all-ages title. There is a bit of hilarity in the book featuring the Killer Folk and the Yancy Street Gang which has to be seen to be believed and it adds just a little extra something special to an already great book.

Arthur and Mera are taking some much needed rest and relaxation after the events involving the invading Thule Empire and so after getting an invite, they decide to go to the Amnesty Bay Sea Festival. Mera only goes at Arthur’s urging as it will help to expand their relationship with those who live on the surface world. So instead of making a fuss about it, Mera agrees and they invite some friends to go along as well. A few things happen in this issue courtesy of Dan Abnett and Vicente Cifuentes including Arthur’s plans for the future, what he would like Mera to do and a new mystery involving the murder of some assumedly, unrelated people. None of it in singly is very compelling and altogether it tells a decent tale, but it is all a light bit of fluff that feels like filler more than it does not. Considering that the series is going to be rebooted soon among a number of other DC titles, there is really no reason for the Abnett or DC to start a big epic as there is the chance that none of it will matter anyways. The story was not bad in any way as it was written well and Cifuentes does a great job illustrating it, it simply feels like things are winding down and is ultimately creating an atmosphere in the book that tells the reader they need not bother tune in for more until Rebirth happens. Still, things could pick up in the next few issues, it simply remains to be seen.