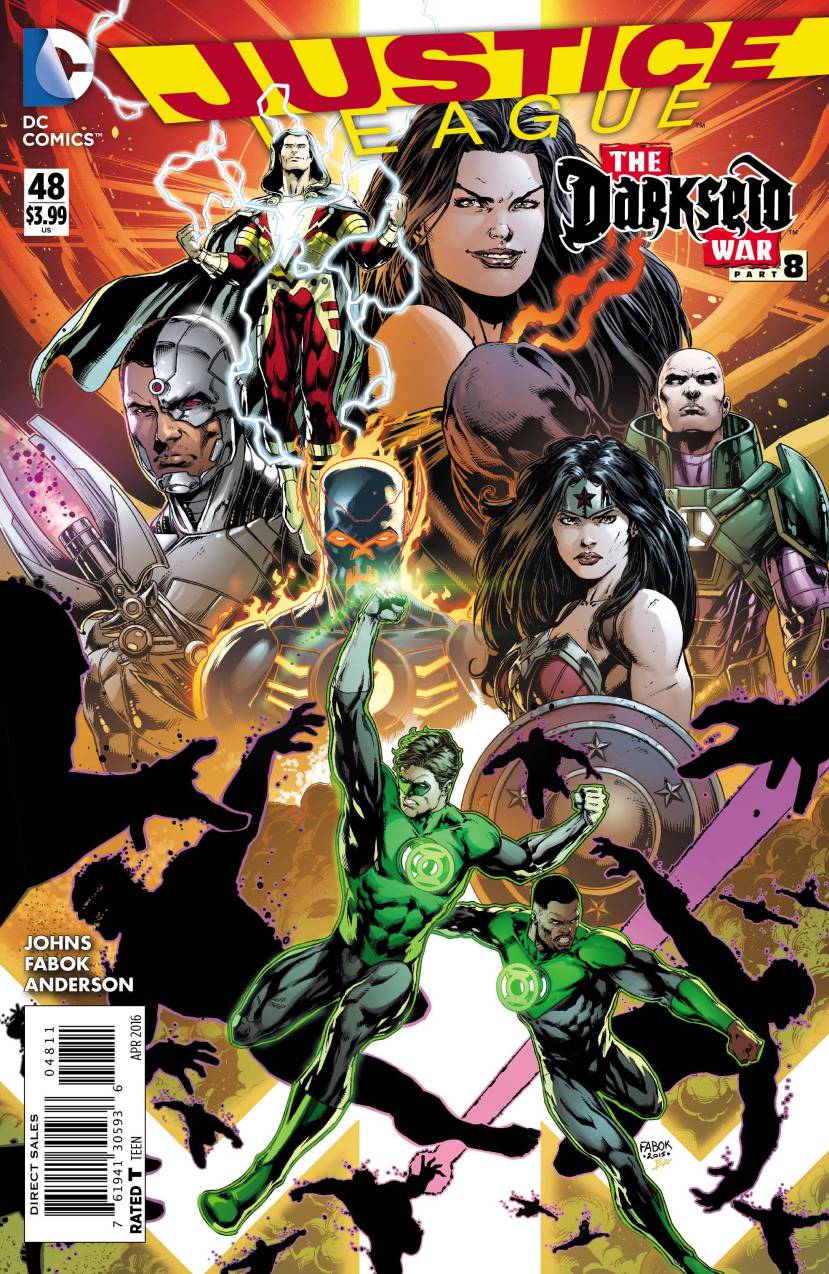 Sometimes you have to make a deal with the devil and in this case, it would be devils as the League enlists the Crime Syndicate for help in the fight against the Anti-Monitor. It is obviously something that they do not wish to do, but at the moment, they feel as if they have run out of options and the Syndicate possesses information that they need. Geoff Johns has been crafting a fantastic tale with the Darkseid War and this latest chapter is no exception. You can feel the hostility between the two teams and the reticence that is present at the idea of combining forces. Also, you have to know as well that they are both thinking of the aftermath of the fight, as in what will happen because it is a sure thing that the League will not just let the Syndicate go on their merry way. As it is, an agreement is reached and they head out to do battle which is as frenzied and violent as imagined and yet even with the Syndicate helping them, they still find that they are underwhelmed in the power department. Luckily a possible saviour appears, though what good he will do remains to be seen. Illustrating this book is the returning Jason Fabok who is second to none when it comes to illustrating DC’s Big Guns and each page is packed with energy and excitement. There is a scene where the Green Lantern Corps. swoop in to save the day that perfectly captures that furor of action, but it is also tempered by the overall dourness that our heroes feel at the entire situation. With Jessica now completely encompassed by Volthoom, you have to wonder just how it is our heroes will save her or if Power Ring will now remain with the Syndicate full time, not to mention Cyborg who is in the same situation with Grid. There is also the question of the missing Grail who only makes a very slight appearance in the book which is a bit of a mystery itself as to what her overall plans are at the moment. Whatever they might be, it is the perfect opportunity now that everyone is otherwise occupied. With everything that is going on, a final question nags at you a little, which is where are the New Gods and are they going to get involved? This was a very fine issue through and through and is the best storyline this book has ever seen bar none. Definitely worth checking out.

Of late, Hercules has been trying to get his life back on track, to become a hero again in the eyes of the public and namely, himself. But he has also had to deal with old friends and old enemies coming back into his life, more often than not – to die. There is a storm coming, everyone says so and everyone knows so and it heralds the end of the old gods to usher in an era of the new. The ancient creatures and gods of myth though are not willing to go into that good night and thus come to Hercules in the hopes that he will stand for them. Of course, Hercules being on this new path of his, will do so, not only because it could mean the end of his life as well, but because it is the right thing to do which is what being a hero is all about. When last we left off, Dan Abnett and Luke Ross had Gilgamesh finally leave the couch to try and follow in Hercules’ footsteps and while his intentions were good, Gil walked himself straight into a trap. The one thing that Abnett does exceedingly well no matter what book he writes is characterization and it is no less effective here than with Gilgamesh – a character most people write off like D-Man and essentially living up to his moniker of The Forgotten One. It is not so here as you actually come to care about the guy, even though for the most part he has just been a couch potato. Sure, he has a little bit of a self-confidence issue, but deep down, he is still the hero he always was and Abnett brings that out of him creating a truly great supporting player in this book. Finally making an appearance in the title are two members of the so-called Uprising Storm and while they seem laughable, the fact that they have already killed a number of the ancient beings in past issues, makes them no less formidable and leaves the book on a cliff-hanger that makes you antsy for more. One of Marvel’s most underrated, yet better books.