From Hell It Came is as ominous a title as you may ever hear.  It conjures up all sorts of nastiness in your mind like devils, demons or what have you and while you might think you are in for the most epic horror of your life, you would be somewhat off in your estimation.  Just a little.  Instead of something crawling out of the pit, what you eventually see on screen in this film is a tree monster, like one of Tolkien’s Ents come to life except with the special effects you would expect to see in 1957.  You can call Tabanga, the tree monster’s name, either atrocious or inspired or maybe even both, but it is one of the most unique monsters to ever grace the silver screen and though it does seem a little silly at times, it also manages to be a little creepy too. 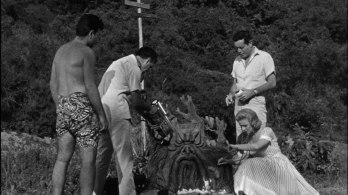 The story involves a man being executed so that the witch doctor can take over the leadership of the tribe.  Vowing he will come back from hell to take his revenge on those responsible, a dagger is thrust into his heart, killing him.  The man is buried underneath a stump where after some time, the latent nuclear radiation in the ground reanimates him and merges him with the tree under which he is buried.  So it is that Tabanga sets out on his bloody quest, seemingly unstoppable.

Combining science-fiction with horror, From Hell It Came managed to work despite its small budget and comic-looking creature. 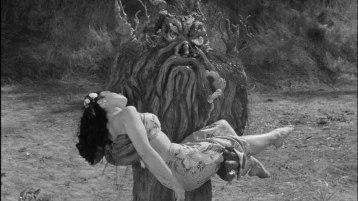 Directed by Dan Milner and written by Jack Milner and Richard Bernstein, the movie was a short one and never overstayed its welcome, actually capturing your attention quite thoroughly.  Most of that can be attributed to Tabanga as you always wanted to see what was going to happen next and just how it was that the scientists on the island would eventually get rid of it.  The people of the tribe try burning it which fails spectacularly and nobody can find a way to stop it, that is until someone finally notices the knife sticking out of its chest and gets the brilliant idea to drive it in further – with a bullet.  It works of course, but it puts a spotlight on one of the biggest plot holes in the entire film which is why did the scientists not simply remove the knife or plunge it deeper when they had Tabanga in their custody?  You would think being scientists that they would have done a little experimenting.

On the whole, the film really is absurd, but it is oh, so good as well.  The acting is not especially great though it can be chalked up to the script and of course, the effects could have been a little better, but as far as costumes and creatures go, Tabanga is not the worst one you will ever see.  From Hell It Came is worth a watch at least once, maybe even a few times which you might find excessive, but you will discover that once may not be enough.