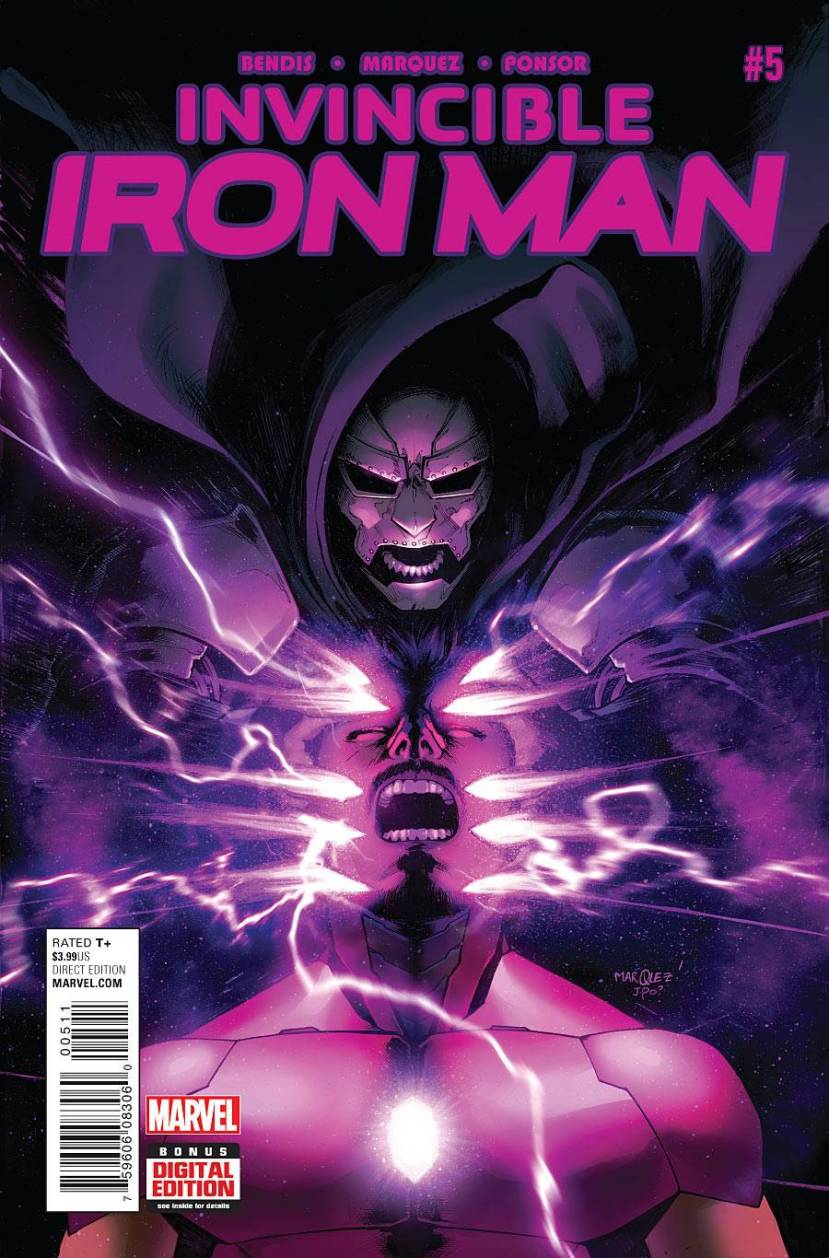 Brian Michael Bendis and David Marquez wrap up the first arc of Tony’s new book by taking the fight to Madame Masque, which just so happens to be in the middle of Mary Jane Watson’s new nightclub. Suffice it to say, the only real casualty of the battle that would take place would be the club, much to Mary Jane’s dismay. The action is thick as our hero faces off against a woman he once called his lover and more – her newfound magic against his tech. Luckily, though formidable Tony might be, his new best friend Victor Von Doom is there to help him out in a situation that he frankly has no idea how to handle. With this issue, we finally learn what happened to Madame Masque and why it probably was that she wanted all of those magical artifacts for without being explicitly told, but we never do learn just where it is they all went. In years past, Doom and Iron Man have teamed up before, albeit reluctantly, and to see them do so here hearkened back to all of those old stories, lending both a moment of nostalgia as well as making for some incredible visuals. The two do things in this battle that we have never seen them do before and Marquez delineates it all perfectly upon the page as Justin Ponsor’s colours make everything literally pop just like it was straight from the big screen. Bendis fills the book with some good banter amidst the action and we even get to see Mary Jane get in on some of it, mainly because she is pretty furious at having her dreams snuffed out before they even began. She finally escaped New York and all of its superheroes and thought Chicago would be the place to start things fresh and maybe lead a normal life, obviously not knowing that life had something different in store for her. Doctor Strange even puts in an appearance to help clean up the loose ends and it is perhaps the funniest moment of the book to be had. By the end of the story, a new status quo is set, Doom is nowhere to be found, though you have to know that he is going to pop up once again and Tony is ready for whatever tomorrow brings. A great book on every front, one that should be on everyone’s pull list.

Becoming a squire to a wizard-slayer was not something Becca ever dreamed for herself, had never even considered in the entirety of her life or thought was real. Now Becca is on Weirdworld, doing that very thing instead of spreading her mother’s ashes back on Earth and all she can think about besides wanting to get home is how annoyed she is the Goleta, the wizard-slayer in question, and the whole situation. While she may not realize it at the moment, Becca will soon have to deal with Morgan Le Fey who wants the Wuxian Seed as well as her army of Lava Men. At the moment, Marvel has a ton of great artist bringing a ton of different styles to their various books, but none can really do what Mike Del Mundo does here and that is make the fantastical come to life so vividly that it fills you with excitement the second you see the cover of the book. It is not just for the fact that you might get to see all sorts of Marvel characters from ages past either, but seeing what the man comes up with such as the design for Goleta or the way he draws the flora and fauna – everything demands to be examined on the page and the book takes a while to read simply for that very fact. That does not mean that Sam Humphries is a slouch either, for he has started the book off on a story that not only picks up on the threads that Jason Aaron started in the first volume, but takes things in a new direction with a new character in Becca and a surprise return from Ogeode who was thought to have been slain in the first issue and now sends Becca and Goleta on a quest. So far there has been a lot of weird and wonderful things seen in this new series and especially with this issue, with a promise of more. Moltar seems keen to get into battle while Morgana does not, you know the army of Man-Things is going to be seen again and it can only be a matter of time before Skull and Arkon and more come out of the woodwork once again. More than any other, this is Marvel’s most inventive book at the moment and the one that you will arguably, hunger for the most between each and every issue.