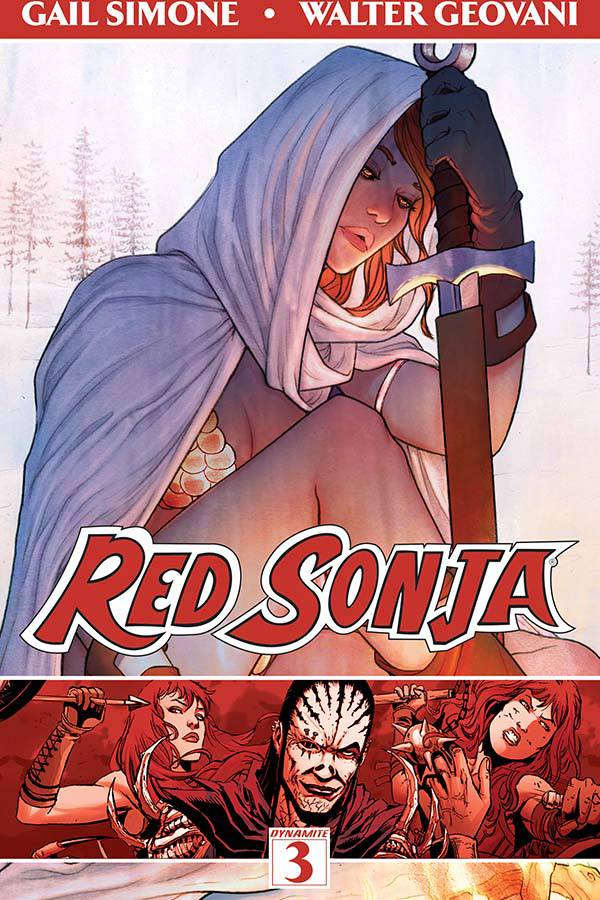 The third volume of Red Sonja discovers our heroine in a bit of a predicament. After killing a murderous wizard by the name of Kalas-Ra, she finds herself cursed by his dying breath. Said curse causes Sonja to lose the ability to forgive. It may seem like a small matter to some for even Sonja laughs at it, but soon enough her actions show her that the ability to forgive is no small thing and the consequences of being unable to do so run deep. Add to the fact that Kalas-Ra’s brother Katharas-Ra is out for revenge and it makes Sonja’s most challenging battle, harder still. 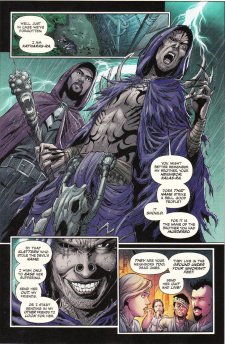 There have been many times over the course of Red Sonja’s publishing history where we have seen her defeat all manner of creature including man and all of them have usually been quite entertaining, but the best battles she has ever fought have been against herself. That is usually the case when it comes to any hero, for if they cannot overcome themselves, cannot find the inner strength they need to overcome any situation, then how would they ever be able to defeat those problems of the physical world. In this particular battle, Sonja must not only overcome the curse so that she is able to learn how to forgive others, but she also must learn how to forgive herself and perhaps along the way, learn a little humility.

While all of the stories Gail Simone has written featuring our heroine have been entertaining, this is Simone at her best with a tale that not only features a fair amount of action, because it would not be a Red Sonja story otherwise, but is one that moves you at its core, one that makes you feel for Sonja more than any other has before.

There is one additional tale in this book that features Red Sonja coming to the aid of some women in order to save their library. Much like the first story, Sonja does what she has to and by the end, improves her situation in life with a little courage and a little knowledge. Both of the compositions in this book feature not only Simone’s wistful words, but Walter Geovani’s incredibly detailed and breathtaking pencils. Whether it be the spells of wizards, the gorgeous women or the fantastic beasts within, Geovani was born to draw Red Sonja and it is equally to his credit that this book is as good as it turned out to be.

More often than not, when it comes to the sword and sorcery genre, you do not expect more than the usual fare where the hero versus the monster and rescues the princess or gets the treasure. In the case of Red Sonja, such was the case for many years that is until Gail Simone came on board and changed the way we look at our heroine. This is a Red Sonja that was never seen before and there is a good chance, one that we will never see again. Sonja became more than just a mythical figure or your average barbarian warrior, she became a woman with all the faults and aspirations that any other person might have. To say that reading these stories was enjoyable would be doing them a disservice as Simone and Geovani gave Sonja the life she had never had before, making you reevaluate the character and forgetting all your preconceptions. For anyone that considers themselves a fan of Red Sonja, this volume and the two preceding it are must-haves simply for the fact it is the definitive version of the character.