Crescendo is a bit of a strange film, not being really a horror nor much of a thriller though if it were anything, it would be the latter despite the lack of anything you might remotely call thrilling. Slightly suspenseful drama might be the best way to sum it up and yet the film just seems to meander along for the most part with very little happening until the very end of the film.

It is definitely not one of Hammer’s best films and when stacked up against their other psychological thrillers, it is by far the least impressive and yet, there is enough there to hold your interest despite the lackadaisical pace.

The film finds Stefanie Powers starring as a woman named Susan who heads to France to write a thesis on a composer named Ryman. She ends up staying with his family and while all seems fairly normal, things could not be further from the truth. Powers does a good job as the lead, caught in an emotional storm of feelings for Georges played by James Olson. She pities him, dislikes him and yet loves him as well, and all in a very short course of time. Olson does double duty in this film, towards the end of it anyways, and he too puts in a good performance, perhaps just a little more captivating as the crippled, heroin-addicted former athlete. 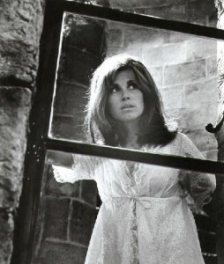 Jane Lapotaire would almost steal the show as the conniving maid, a woman not quite as beautiful as Powers but just as attractive, who would use the heroin in conjunction with sex to keep Georges wrapped around her finger in the hopes that one day she would be the woman of the house. Suffice it to say, she does not make it all the way to the end of the film, but when she is onscreen, your eyes are on her.

There is a distinct lack of blood in the film, especially considering it is a Hammer film, and except for the little nudity that is present, there is really a distinct lack of everything. The film runs on for far too long and even though the script by Jimmy Sangster and Alfred Shaughnessy is written well and the direction by Alan Gibson is satisfactory, it is the utter lack of anything of note happening that bogs the film down. Though the ending was good, it was not enough to ultimately save Crescendo from being a completely average movie, only worth seeing for those that are curious to see a Hammer film that is unlike any other.