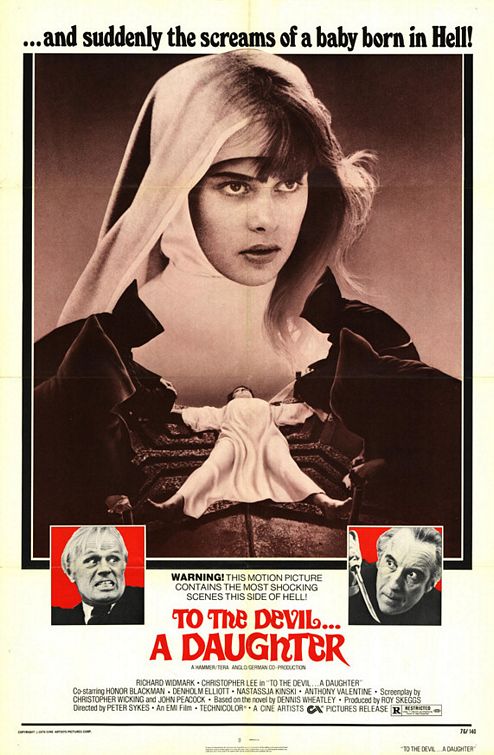 There have been a lot of films about possession and about Satanists, some even put out by Hammer themselves, and To the Devil… a Daughter which is based upon a novel by Dennis Wheatley does not exactly reinvent the wheel but it is entertaining if only for the performances themselves. Starring Christopher Lee as an excommunicated priest and Richard Widmark as the man who stands against him, the film features a somewhat convoluted plot about bringing forth a vessel for the demon Astaroth to inhabit. Said vessel is a young Nastassja Kinski who portrays a nun named Catherine and throughout the movie, Widmark plays a dangerous game of keep-away with the heretic Lee, for if Catherine falls into his hands, humanity is going to pay the price.

The story featured in this film could have used a little work and it did not help that there were so many hands in the pot when it came to the script, but to their credit, the dialogue was good and the characters were both fascinating and compelling. The best moment of the film was a simple one but it spoke volumes as to what was to come for the remainder of the picture. The entire scene takes place on the telephone as Father Michael Rayner is looking for Catherine and he knows that Verney has her. The conversation is short and as polite as it can be, but the words that were left unspoken sold it more than what was said and really made it special. What was quite interesting was that these two enemies would not meet until the end of the film during a fairly climactic moment where Catherine is about to be sacrificed/taken over by the demon. As far as final battles go, it was a little corny, but it served its purpose to close out the film on a somewhat hopeful note.

On a positive note, being a Hammer production and all, it featured an extremely moody atmosphere, one that was always tense and promised impending danger. There were moments where the film was quite chilling and yet at times it could be fairly campy as well. The best part of the film was Lee though, for when he played a villain of the magnitude shown here, he could be truly frightening. His performance in this film was the saving grace more than any others, though Widmark was decent. It was not often you would see Widmark in a film like this, in fact, this would be his only horror outing, and though you would think him to be out of place, he actually holds his own. Would it have been better with Peter Cushing? Maybe, maybe not, but it was nice to see Widmark out of his comfort zone and good to see Lee star with another veteran film actor outside of the Hammer stable.

With a number of eerie moments throughout, To the Devil… a Daughter managed to be entertaining despite its faults. Perhaps if Dennis Wheatley himself had had a hand in guiding the film, we might have ended up with something completely different, but as it is, it is still better than many of the other horror films released at the time.