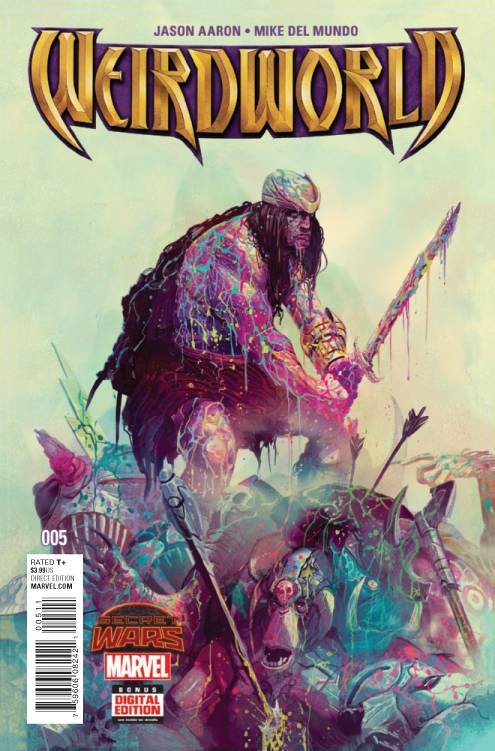 Arkon has had enough. Just as he was about to end it all, he realizes that he was a leader among men, a Lord of Warlords and if he has to carve a new Polemachus out of Weirdworld to rule, then he will do so. Thankfully that labour will not come to pass for Morgan Le Fay shows up to destroy him and in doing so, reveals to him that Polemachus was beneath his feet all along. Literally. The most visually stunning book published by Marvel at the moment, out of all the miniseries that were launched with Secret Wars, comes to a close though where one epic comes to a ends, another one starts as this book will soon become an ongoing later in the year. There is a ton of action as Arkon engages in battle with Le Fay and they are soon joined by the resistance headed by Jennifer Kale, Skull the Slayer and her legion of Man-Things. Even Warbow returns along with a bit of comedy to lighten the mood and best of all, Crystar, now reassembled and ready to fight on Arkon’s side in return for saving him earlier. The writing is taut and suspenseful and Jason Aaron really outdoes himself on this last issue, bringing together all of his plot threads into one spectacular tour de force. While Aaron’s story is exceptionally compelling and exciting, Mike Del Mundo’s pencils are what really drive it home for the reader, all colour and movement and every page is a feast for the eyes. The best thing about this series, aside from the creative team, is the cast of characters. There are no A-listers present, only those very rarely seen and often not for years at a time. Though it seemed like a very risky choice, the fact that Marvel decided to take a chance on a book that was not an established property paid off in spades by becoming the best title to spin out of their latest big event. With the new series soon coming out, hopefully this is not the last we will see of these characters.

With DC’s latest initiative to focus more on storytelling than on continuity, to a certain extent at least, it finds them looking to the past and to the original Teen Titans. Dan Abnett presents the story as a mystery taking place in the current continuity, one starring Dick Grayson, now a member of Spyral, as well as Roy Harper and an enigmatic woman who could be Donna Troy. The three are having strange memories bubble up and experiences that cannot be explained and though we may not know exactly what is happening, we do know what it all means. What will be interesting to see is how Abnett ties the current continuity to the pre-Flashpoint universe, if that is indeed where he is taking it. There is an entire generation of fans who miss that particular universe, and as some would say, the real DC Universe, and it looks as if this series is going to cater directly to them. What will be interesting to see is just how it will all tie together and if whatever happens will affect other titles as well, not to mention the Grayson book currently being published. Even more intriguing will be to see if the original team makes a comeback, if that is even at all possible. So far the book is off to a decent start, though it is not as exciting as it could be. There is enough of a mystery happening to draw you back though and as Abnett is a writer adept at weaving compelling tales, the book should only get better.