On a training exercise, a group of soldiers who are checking for radiation come across a large source of it down in a giant sandpit. After something within the earth causes an explosion and claims the life of one of those soldiers, Dr. Royston who is a radiation expert, is called in to investigate. More death and destruction soon follow and Royston theorizes that some sort of prehistoric life must live underneath the earth, one that feels the need to reach the surface periodically to feed on radioactive material. What ensues is a fairly average, yet well-produced piece of science-fiction that ends up being a step above many of the monster movies that came out in the same time period.

One of those reasons is the script by Hammer mainstay, Jimmy Sangster. The man knows how to write and while the film did not have a very large budget which was obvious in the creature effects, his story and script made the film a lot better than it might otherwise have been. That being said, Sangster’s tale of a prehistoric blob that feeds off of radiation is not exactly ground-breaking, yet it comes alive thanks to the many actors of the film who do a fine job of bringing it across to the viewer and creates an effective atmosphere of tension and fright. The film is at its best when the creature is off-screen, as most movies tend to be. An unseen assailant is often far scarier than what the reality turns out to be and when a film has a minuscule budget, once you reveal your madman or creature or what have you, it can often break that suspense and trepidation that may have been building up. Once that reveal was made here, despite how silly it seemed, the film still holds up thanks to the professionalism of everyone involved and the script that they worked from. 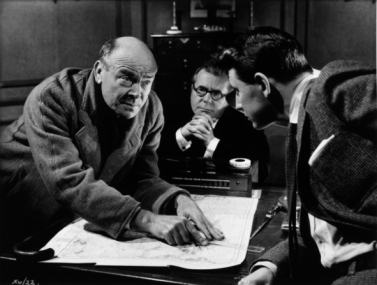 Dean Jagger stars as Dr. Royston who does a great job in the role. What is most interesting about this picture, and many of Hammer’s other films is that unlike many other science-fiction or horror films, the hero is often middle-aged or older. There are no virile young men to come and save the day, instead, it is experience and wisdom that win out and it makes the viewer feel like everything is going to be all right because of it. So while the young ladies who watch this may not swoon over the lead character, you know that he is going to get the job done no matter what. The rest of the cast including Edward Chapman and Leo McKern is quite good but as their roles are fairly generic in nature, you might find yourself not caring so much about them as is the case here.

Entertaining, suspenseful and being a film that kept you almost on the edge of your seat, X the Unknown would walk that fine line between horror and science-fiction perfectly. Like all Hammer films, it did not have to try all that hard to gain your attention and once it had it, you had to follow it through to the end which is definitely a measure of success for a film if ever there were one.