In Hammer’s 1962 production of The Phantom of the Opera, it would see Herbert Lom step into the shoes of the tragic figure and it would be both a captivating and haunting performance. Many people have performed the role of the Phantom over the years, both before and after Hammer put it to film, but there was something just a little better, something almost magical when Lom would take on the role. While the character being a little mad and perhaps a little obessesd, he had a good reason to be and the movie would focus upon his unfortunate circumstances and his eventual redemption at the end of the picture. 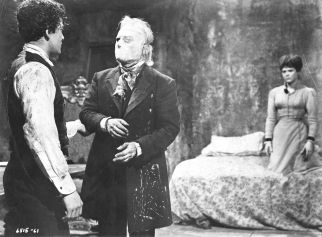 What is a little unexpected, is the vulnerability in Lom’s performance and because of that, while it is not overpowering, it is still commanding and your attention is on him at all times. Most would assume that he would draw your gaze due to his appearance, and though it might be a little disturbing, it is instead Lom’s demeanour and speak that captures you and your empathy.  Despite having the least amount of screen-time out of anybody else in the movie, Lom would be the draw.  They say that the eyes are the windows to the soul and Lom, with a single glance, with one single eye visible, was able to convey all the heartbreak and tragedy that his life encompassed. Tortured, ruined and possessed, the Phantom only wants the truth to out and he would do anything to see Lord Ambrose fall just as he fell. You understand where he comes from, why he is doing what he does and you not only feel pity for the Phantom but a kinship as well and in the end, you found yourself wanting what he wants. 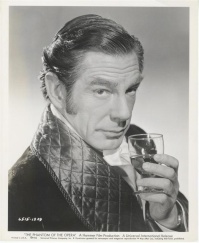 The true villain of the film would soon be revealed to be Lord Ambrose D’Arcy as played by Michael Gough. Ever the professional and ever the perfect villain, his portrayal would be one of a truly unforgiving man, one who used his position of power to his advantage in any situation when called for and against anybody he saw fit, man or woman. Women specifically were subject to his vile whims, essentially forced to do whatever he wanted, when he wanted in exchange for the promise of stardom and there is a moment when he does so to Christine, the film’s leading lady. Thankfully Harry is there to intervene at just the right moment and stop Ambrose’s machinations. Gough would infuse his character with an arrogance that just seemed to melt off of him at all times and you can see how the rest of the players in the film despised him so much. Though Gough would be fantastic, Lom would still shine as the star of the movie, as he should.

Of course, the film offer’s Hammer’s distinct production values, their ever-dependable cinematography and the expert direction of Terence Fisher, known more famously for directing some of Hammer’s more popular monsters. For the most part, one thing that was unneeded were visual effects except when it came to the Phantom and the whole reason that he does what he does, namely his face and his mask. Unlike the pristine white half-mask that many might be accustomed to, this Phantom sported one that would cover his entire face. It would be dirty and claustrophobic and show that he was blind in at least one of his eyes and when combined with his wild and gray, unkempt hair, he paints a terrifying portrait indeed. If you were to come upon this Phantom in the dark, you would most likely be terrified and whether it be the mask or the man’s acid-burned face, Hammer successfully achieved what they needed, at least until all was revealed at the end of the film.

The movie would not be complete without our protagonists as played by Edward de Souza and Heather Sears. Though they did a great job in their respective roles of Harry and Christine, when stacked up against Lom and Gough, the two never stood a chance. Most often, Hammer would deliver horror films where it was immediate and apparent, yet here that would not be the case. The horror in this picture was slow in its reveal, and while it might seem to be a standard creature feature at one point, it evolves into something else, so that the horror you see comes from the action, and at that, one man in particular. Is this ghost of a man called the Phantom scary? Perhaps a little bit, but underneath that mask and his scarred, rotting flesh, he is just a man the same as anyone else. A lot of people do not realize that Hammer was responsible for more than just re-popularizing Frankenstein and Dracula; they also put out a lot of films that would seemingly go unnoticed and as such, turn out to be hidden gems. The Phantom of the Opera is one of those pictures.