Dancing With the Stars – TV Night‏ 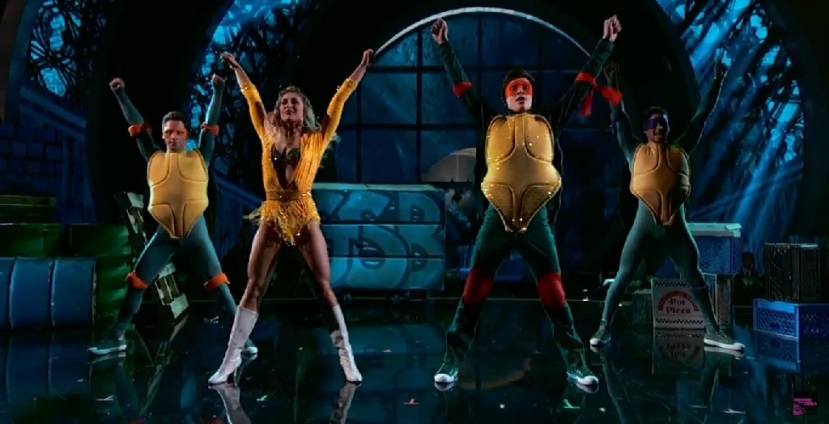 Welcome back for a new week of Dancing! Tonight we step into TV Night, in which our dancers will be dancing to TV theme songs, complete with costumes. I have to say, I’m most interested in seeing Hayes and Emma dance to the Ninja Turtles theme song. I’m excited to see what they can do with that song. But we’ll get to that dance a little later. Let’s start at the beginning, shall we?

These two decide to do a routine from the Golden Girls theme song, Thank You For Being a Friend. I absolutely love this song, and I love it even more when the two come out dressed as seniors. As Julianne says, I’d love to look like these two when they’re in their 70s or so. I think they dance pretty well together. The dance is goofy, but I think they’ve pulled it off. Alfonso, our guest judge tonight, says that the dance was good, but that Carlos needs to use more energy. Julianne and Carrie Ann agree. Bruno says that they were really in sync with each other, and it was his best dance since the beginning. Carrie Ann disagrees.

Paula is having a little trouble with confidence this week. She’s struggling to keep up with everything, and lack of sleep is affecting her emotions as well as her ability to learn the routine. Louis is really good with her. He’s very encouraging, which I think is really sweet. They dance to the Giligan’s Island theme song, and it’s pretty rough. She forgets a few moves, and the whole thing is pretty lackluster. The judges are mostly positive, though Bruno says she needs to bounce more, and Julianne points out that their moves got away with them a little bit. I think she needs to be worried about going home next week.

I’m starting to doubt that these two will ever actually agree on anything. Val thinks that they need to improve their chemistry, like the judges have said. Tamar thinks their chemistry is just fine. They decide to dance to the theme from Mad Men, so of course, Val suggests he’s a boss, and she’s his secretary. She doesn’t like that idea. Why should she have to be the secretary? Why should she have to pour him a drink? Um, because it’s the 60s? Has she ever even seen Mad Men? Anyway, maybe I just don’t like the tango, but though it was technically proficient, I just wasn’t a fan of the performance. I also didn’t like the extra drums in the theme. The judges all disagreed with me, though, so what do I know? Carrie Ann says that it was must see TV, and Alfonso tells them they’re front runners. His only advice is that she should let him lead her. She argues a little bit, but I don’t think it’ll affect her that much, votes-wise.

Most of their pre-dance package is just a little skit about how obsessed with Breaking Bad Mark is, so we’ll just get into the dance itself. Um, it’s amazing. They come out in Hazmat suits and gas masks so it’s difficult to tell who is who, which is kind of cool. Their moves are very precise, almost completely in unison, and it’s clear how in tune they are with each other. It flows really well, and it seems to tell a great narrative. All the judges are very enthusiastic, raving about the performance, which is nice to hear. Carrie Ann says it was really innovative, and Bruno says they looked like two pros. Alfonso tells them they can win this competition, and I agree.

Something I didn’t know about Andy is that he’s on tour at the same as he’s on the show. This makes me even more impressed with him, knowing that he’s so busy. I don’t know how he finds the time to practice! It helps that Allison is on tour with him. I really like how well these two work together. They definitely have a connection. Tonight, they dance to the American Bandstand theme. It’s a very appropriate dance for the song. I feel like I’m really watching something from the 50s, which is really cool. Apparently he’s missed a few steps, and his posture is wrong, but I don’t notice at all. I love this dance. The judges are a little hard on him. Alfonso thinks he looked a little uncomfortable. Bruno says he’s got to work on finishing his moves. Carrie Ann says he was entertaining, but he was too in his head.

Gary was pretty bummed out about his scores last week, so now he’s working hard to improve himself for this week. It’s clear that he’s got a great work ethic, which is really endearing. He wants to prove to the judges that he’s got it down. They dance the tango to the Addams Family theme song, and it is better than last week. She still does most of the work, and he’s still kind of Frankenstein-y (maybe they should’ve danced to the Munsters instead?), but he’s still fun to watch. The judges had nothing but praise for him. Carrie Ann thinks he’s handsome and has a new elegance to him. Alfonso says he stayed in character the whole time.

The thing that Alek needs to work on in order to dance a good tango is his sexiness. He’s young and kind of shy, so he’s a little awkward around girls. So what does Lindsay make him do to get over it? Talk to more girls, of course. It’s a little uncomfortable just watching him with girls, because he’s awkward, but he’s so adorable. He even manages to strike up a conversation with Jenna, and Lindsay assures us that he’s going to take her out. Adorable. Their dance to the True Blood theme song is really good. It’s very precise, and his steps are spot on. Carrie Ann notes that he’d made a little mistake, but all the judges love his performance. Alfonso says he dances like a hero. Julianne says he’s got the best technique of all the Stars.

Unfortunately, Kim had a mini stroke last Wednesday and was in the hospital until Friday. She’d learned the dance on Saturday, but her doctor had advised her not to take the flight from Atlanta to L.A. because the cabin pressure would be very bad for her. So Tony does the dance with Jenna instead, and of course, it’s great to watch. Unfortunately, because Kim can’t perform, this means she’s got to withdraw from the competition. Both she and Tony are upset about this and more or less beg to let the rules be relaxed, but there’s not a lot that can be done. We’ll miss you, Kim!

These two were supposed to dance to the theme from the Jetsons and had spent most of the week rehearsing for that song. Then they got the call that they didn’t have the rights to use the song, so they had to change to the Jeffersons theme song instead, and they had two days to learn the choreography and make it TV ready. On top of everything else, Bindi’s foot has been hurting for a while, so that’s set her back a little as well. It shows a little in her performance, though I still think it’s pretty good. For the first time, the judges are pretty critical of her. Alfonso says her posture wasn’t great. Bruno liked the dance but she needs to be more in control. Julianne says it wasn’t her best performance. Derek points out to Erin that Bindi did extremely well, considering she only had two days to learn the dance. I agree. I thought she did well.

It’s clear from their pre-dance package that Nick is starting to get a little frustrated when he can’t learn his dance moves fast enough. He seems to put himself down a little bit when he gets like this, but Sharna is the perfect teacher. She’s nothing but encouraging, not allowing him to feel sorry for himself. This is exactly what he needs. The dance is absolutely beautiful. They both look amazing, and the dance itself is very elegant and smooth, everything you would expect from the Downton Abbey theme song. I’m guessing. I’ve never actually seen the show. Anyway, the judges are all falling over themselves to give him praise. Bruno called the dance a masterpiece. Carrie Ann says he’s turned into a classical virtuoso. Julianne says it was the best dance of the night. I couldn’t agree more.

Last week, this pair was buried in the middle of the pack, which doesn’t please Hayes, so this week, he’s working hard to make up for it and rise to the top of the pile. The problem is that this is a difficult dance to learn, and he’s having a little trouble with it. He never gives up though. He’s hard on himself, so when he can’t get the dance right, he works even harder to get the steps down. Does his determination help him through the performance? Eh….not really. I don’t know if he’d just spent all his energy in dress rehearsal, but in his performance, he looks really tired and sluggish. There’s no energy at all. And the judges agree. They all try to give him praise, but the consensus is that he’s got no energy and his movements weren’t precise enough. Poor guy. With all his fans, I doubt he’ll be eliminated, but hopefully he’ll dance better next week.

That’s it for the dancers. This week’s two pairs in jeopardy are…Paula and Louis, and Andy and Allison. I’m shocked that Andy hit the bottom two. This means that even Kim and Gary did better than him. I don’t understand, but people need to vote for him, dammit! I want him to stay. Luckily for me and for them, since Kim had to withdraw from the competition, neither couple in jeopardy was eliminated tonight. Their scores will carry over to next week when, barring another injury, we’ll have an actual elimination.

The other thing mentioned tonight was a switch up of partners. Fans vote in to say who they want each star to be paired with, and I’m not looking forward to this. Can we vote to keep the pairings the same? I really love seeing Nick and Sharna together, as well as Alexa and Mark. I don’t want them to have to switch!

So what did you think of tonight’s dances? Who did you like the best? Who do you think should go home? And what do you think about the switch up idea? Let me know in the comments below!