Big Brother: In Which We Judy Chop the Final Four To the Final Three‏ 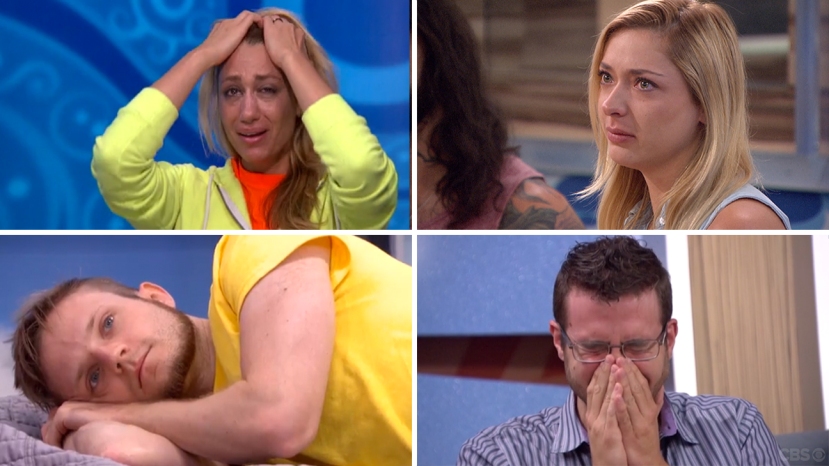 We’re almost there, guys. All summer, we’ve sat and watched the house guests play, scheme, and betray their way through the days, and now we’re down to the final four. As far as I’m concerned, all four deserve to be here, even if we wish that we could swap a few out with others in the jury house. These four house guests have played very differently from each other, but their games have all been vastly successful. After all, they haven’t made it to this point by luck. Just ask Austin. He’ll tell you exactly why he’s no longer in the house.

Speaking of that epic eviction, three of the four house guests were extremely thrilled with what went down, though you wouldn’t know it by watching Vanessa. As soon as she utters Austin’s name, she starts crying and trying to justify her decision, to Austin as he walks out the door and then to Liz, who is clearly in shock. Shouldn’t Liz be the one crying? It’s her boyfriend who was just evicted. Vanessa just keeps saying she’s sorry, she’d had no choice, it was best for her game, and that part is true. I firmly believe it was a better move to get rid of Austin than Steve. Now there are no strong alliances. As Liz says, she’s on her own. Steve and John are tight, but neither one of them would sacrifice themselves for the other one, nor would either think twice about turning on each other if it meant they could get further in the game. I think they both realize that about themselves and each other and they both respect that about each other.

So this definitely is a good situation for Vanessa. She’s got final two deals with both Steve and John, and when she talks to Liz after the HoH competition, they agree to work together too. Now that is impressive. Vanessa completely betrays her boyfriend, and her, and then she convinces Liz to work with her. Wow. I don’t understand her awesome powers of persuasion, but there they are. She actually tells Liz that voting Austin out was a good move for Liz’s game too, as well as Vanessa’s. I can’t figure out how, but Liz seems to sort of buy it, but then, she doesn’t really have much of a choice. She’s completely written off both boys, probably because she can’t manipulate them the way she’s used to with guys. The way she used to be able to manipulate Steve even. Maybe her magic has worn off because he knows her so well. Or maybe he’s seen her and Austin making out enough times that he’s now got an aversion to her rather than attraction. Either way, she doesn’t care about John, and she absolutely hates Steve for some reason. Yes, I know he kicked out her sister, but Vanessa just kicked out her boyfriend and orphaned her, but she’s still cool to work with? I don’t get it. Maybe she figures she can still charm Vanessa. I don’t know.

So after Vanessa talks to Liz and makes a deal with her, she goes to John to do the same with him. She figures with Steve as HoH, there’s no way that she’ll be working with both Liz and John after this next eviction, so she’s free to make all the deals she wants. Except that by making deals with both, she’ll have to betray one of them if she wins the final veto, which could garner more ire from the jury. But whatever, she can do what she wants. John and Vanessa both agree that it would be stupid to take Liz to the final two, since she’s already got two guaranteed votes to win. Plus, she’s a good competitor and she hasn’t pissed anyone off yet. I completely agree. I’d never want to go up against either woman in a final two scenario. No way, thanks.

So Steve nominates John and Vanessa for eviction, though it doesn’t matter at all, since the veto is the competition that will determine who’s on the block and who gets to vote which ends with none of them paying the nominations much heed. They just go back to doing what they were doing beforehand. It’s a nice relaxing nomination day.

In the jury house, the group is joined by Julia first and then Austin. Julia seems completely at ease with having lost the game. She’s all smiles as she tells the others what happened in the house before she left. Austin, on the other hand, is a completely different story. He’s so full of bitterness at Vanessa, and he’s ready to spew it all and infect all the others. He wants to make sure that if Vanessa makes it to final two, the jury will turn against her and vote for the other person. No one really says anything except for Shelli, who defends Vanessa logically. She says that even though Vanessa betrayed him, he can’t deny that she’s been playing an excellent game. Austin does deny it. He doesn’t think she’s played an amazing game, and he’s ready to list off the reasons. A few of the others admit that they’d known what she was up to, and Shelli points out that even though everyone knew what she was doing, they’re all here, and she’s still in the game. Shelli has a point. Everyone has been warned multiple times what a liar and manipulator Vanessa is, and yet no one except Becky tried to evict her, and when she did, everyone else let Vanessa slide. They all let Vanessa play them.

After a brief interview with Brenchel (they’re having a baby!), we get to the veto competition, where we’re joined by Beastmode Cowboy himself, Caleb. The backyard is all decked out like a dojo, and the house guests are all dressed in karate gis when Caleb comes out and explains the game to them. The challenge is called Martial Smarts, and Caleb will read out an event that happened in the house. The players will have to guess which day each event happened on by punching and kicking their cardboard opponents. Punching will raise the counter by five and kicking will raise it by one. If they’re right, they’re good, but if they’re wrong, their counter will reset, and they’ll have to try again. The last person to guess the correct day and buzz in will get a strike, and two strikes mean they’re out.

So we get right started, and after the first two questions, Liz is out. Caleb judy chops both of the boards with her name on them. After the next two, Steve is out. Sigh. I was really hoping Steve would win, because he says he’d have taken John off the block and had John vote Vanessa out. I still hold out hope that John could win, as he’s done really well so far in the game, but Vanessa wins the next two rounds, and she’s declared the winner. Now she’s got the single vote to evict. Liz is happy because she figures she’s safe, but she’s also a little nervous, since Vanessa had just blindsided her boyfriend last night.

I admit, I half expected Vanessa to vote out Liz, because, as she and John talked about earlier, Liz is harder to beat in a final three and a final two than John, so she surprises me a little when she tells John that she can’t trust him enough to keep him. She’s still (rightfully) paranoid that John and Steve are too close to each other, so she sends him out the door and keeps Liz. John takes it like a champ. I swear, nothing can shake this guy. He tells Julie that if he’d won the veto, he’d have voted out Vanessa, so maybe that’s why he’s not upset, because he’d have done the same to her. He also says that he thinks he should’ve gotten rid of Steve last night instead of Austin, so that Vanessa would’ve had to address the showmance, but that doesn’t make a ton of sense, since if Steve had been voted out, someone else would’ve been HoH, and it very much could’ve been Austin, and then he’d probably still be out of the house. He thinks that Vanessa and Steve will be the final two. We’ll see. Bye John! We’ll miss you!

Well, my hopes of a Steve/John final two have been dashed. I don’t know what I want to happen now. On the one hand, I’d love for a woman to win, since a female winner is rare. But I love Steve and also want him to win. I’m not a Liz fan because of how much of a mean girl she’s been all season, and I’m also not a fan of Vanessa because of the fact that she had a hand in evicting every person but never owned up to anything. Playing the victim is weak, and she’s done that this entire season. So I don’t know who I want to win.

Who do I think WILL win though? That’s tough. I think if Vanessa makes it to final two, she’ll win for sure, even against Liz. Austin is super pissed at Vanessa and is trying to spread bitterness through the jury house, but most of the jury members have been out of the house long enough now to put their personal feelings aside and think logically. I think most of them, like Shelli, can admit that she’s played a good game. But will she be able to make it to the final two? Who knows? If Steve wins the final HoH competition, I think he’ll evict Vanessa. Even with two automatic votes for Liz, I still think he’s got a better chance of beating her than Vanessa. I have no idea who Liz would take. I’d like to believe she realizes she can’t beat Vanessa, but I’m not sure she does. Austin clearly underestimated her. I could see Liz doing the same. I could also see her evicting Steve out of spite for ousting her sister. If Vanessa wins the final HoH, I think she’ll take Steve. Liz and Steve are relatively well-matched in competitions and game moves, and while Johnny has a ton of friends in the jury house, I’m not sure Steve does. I think Vanessa will realize that she’s got a better chance to win against Steve. At least he doesn’t have automatic votes for him the way Liz does.

What I wish we could do is go back and see how different this game would be right now if they’d gotten rid of Austin way back when they were supposed to, and kept Jason instead. I have the feeling Clelli would’ve ruled the house the way Lizten actually did, with Vanessa as their faithful third wheel. We’ll never know though. Whether we like it or not (and I gather a lot of fans are NOT happy), we’ve got our final three. Only one more week to go before we crown a winner! What are your predictions? Who do you think will ultimately win? Let me know! And I’ll see you on Sunday!