Mind Capsules – Wayward #10 and Jem and the Holograms #5

Emi, Nikaido and Ayane with the help of the Tsuchigumo have attacked a temple that holds a great power that they mean to claim for their own. But as the battle rages, things seem a little out of sorts, like what they are doing might be wrong and especially so when said power is revealed to be a corpse. Soon after, Rori and Shurai make their return to the group, and Rori declares their destiny for all to hear, ending the book with a giant question mark filled with anticipation for what comes next. This story is the culmination of everything that the creative team has been working towards and the payoff is quite exciting to see, even if you do not get to see what immediately follows. The battle that takes place was a long time in the coming and instead of satisfying the reader, it does a little, it leaves them hanging with more questions than answers. Why does the Tsuchigumo have such an interest in what our group of heroes do? Why attack this particular temple? Why do these bird-men have such big noses? Those questions and more ring out in your head as you read the book, but Jim Zub leaves us hanging, pretty much like he always does, and he knows that you will be back for more because the story is just so damned good. Enough cannot be said about Zub’s collaborator and fellow creator, Steve Cummings. Along with Tamra Bonvillain on colours, they bring this title to vivid life and it really stands apart from almost every other book on the racks today. It is bright and beautiful and while the story is good, it would not be as such without Cummings to make it come alive. It is hard to find fault with this title and if there was anything, it would be that the villains are not as fully realized as our heroes are. A small thing in a sea of greatness to be sure and for the moment, it can be overlooked as the book is just so enjoyable. Now all that is left to do is hunker down and wait for the next arc to start which will seem like an eternity. 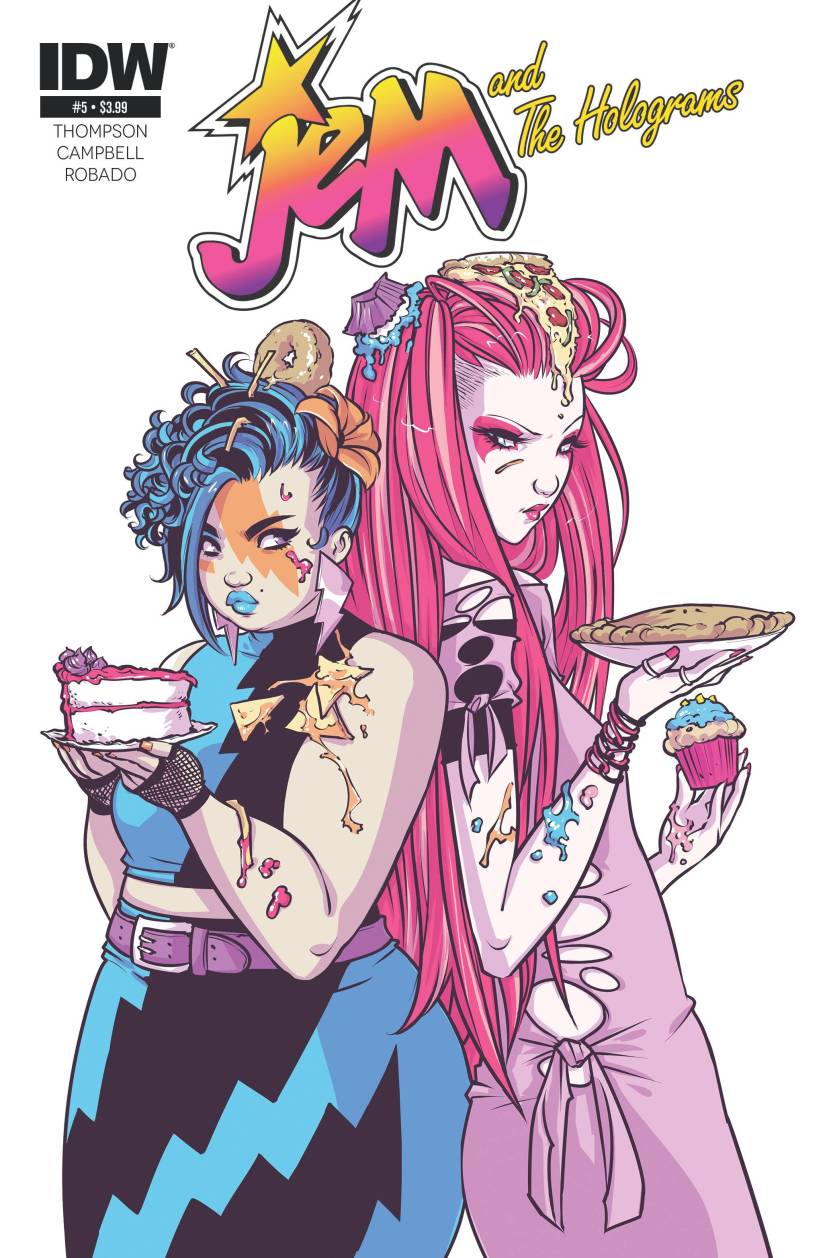 Jem and the Holograms #5

After the ending last issue where it looked like Jem and the Holograms were doomed by the falling scaffolding, only Aja gets hurt and even then, with minor injuries. To say they were lucky is putting it lightly. Due to this little accident, Jem and her compatriots are now more famous than ever and Pizzazz is not happy in the slightest. Things soon come to a head between the two bands, the Holograms and the Misfits, as Kimber realizes that the Misfits were behind the accident and this confrontation has been a long time coming and is not going to be pretty, especially as it involves copious amounts of food. The fun continues in this latest issue courtesy of Kelly Thomson and Sophie Campbell and it is a different kind of fun than most books tend to sport. Here, it is light-hearted and easy-going where not everything that our main characters do are for the fate of the universe or for the protection of a city. It is a simple story, sort of, of four girls who just want to be in a band and play music. It is a basic premise, but it works and so far the stories have been quite enjoyable as we see the girls go through the growing pains of getting their music heard by others, not to mention dealing with the Misfits. The artwork looks great, detailed yet clean and striking and overall, the book is a real joy. One thing that makes this book great is that you can see a confrontation coming between Jem and Rio and it might not be pretty, though there is a chance that Jerrica will come clean before that ever happens. If you liked Jem the animated series, you will like this book. No doubt about it.