Dead Man’s Eyes is a nice little whodunnit that stars Lon Chaney Jr. as an artist who loses his sight and whether it was by accident or on purpose is ultimately left to the viewer to determine. The film once again finds Chaney in the middle of a love triangle, desired by two women though to his character’s credit, he only loves one. When tragedy strikes and Dave Stuart loses that which his career is built around, he pushes everyone away as he spirals further and further into despair. But soon, hope rears its head as Dad Hayden, the father of his ex-fiancé has told him that when he should pass, Dave will receive his eyes. That hope is nearly crushed though when Dad Hayden is murdered and Dave receives the blame with a game of cat and mouse taking place between Dave, the police and the real killer.

The third Inner Sanctum Mystery to make it to the big screen is a good one and once again Chaney appears in a role that pushes his talent a little further than the norm as he plays a blind man. For his part, Chaney does a great job as you believe that the rage and frustration Chaney puts forth on the screen is genuine. The film is quite enjoyable for a number of reasons, the first obviously being Chaney. It features a great script by Dwight V. Babcock and for the first time in the series, the mystery is one that keeps you guessing until the actual reveal. Once again the film is directed by Reginald Le Borg, he injects a lot of tension and suspense into the film at just the right moments and the film gets better and better as it rolls along. For a movie lasting only an hour, the pacing was perfect and there was never a dull moment.

Also starring in this little thriller was Jean Parker as Dave’s fiancé, Paul Kelly, Thomas Gomez, Jonathan Hale and Acquanetta. Out of everyone else in the film and even though she was a terrible actress, Acquanetta is the one to watch. Essentially cast in films due to her beauty, the woman could not deliver a line that did not seem stilted or believable in the least. Still, it did not stop her from having at least a middling career in film with this movie being one such example. It is not so much as interesting because of her performance, merely for the fact that she is here and made less than a dozen films during her lifetime which coupled with everything else known about her ends up giving her a somewhat cult-like status.

Like all of the Inner Sanctum movies thus far, Dead Man’s Eyes is a short but entertaining film. The best thing about them is that they allow the movie-going audience to see Chaney without any makeup on and it allows him to do something outside of the horror genre. Getting pigeon-holed is never a good thing, especially if you have the desire to do other things that might tend to get overlooked, so these helped free up Chaney, at least for a little while. Dead Man’s Eyes is definitely worth a look if in need of a good mystery. 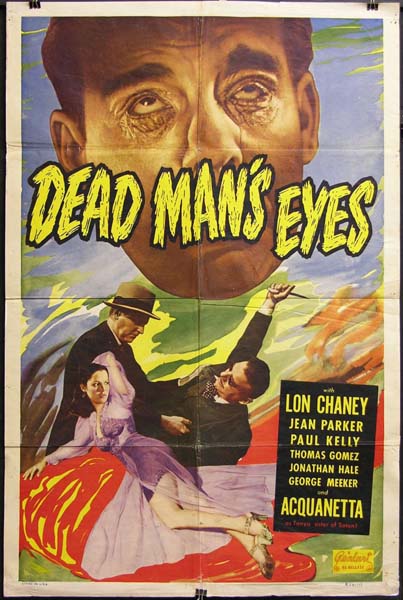