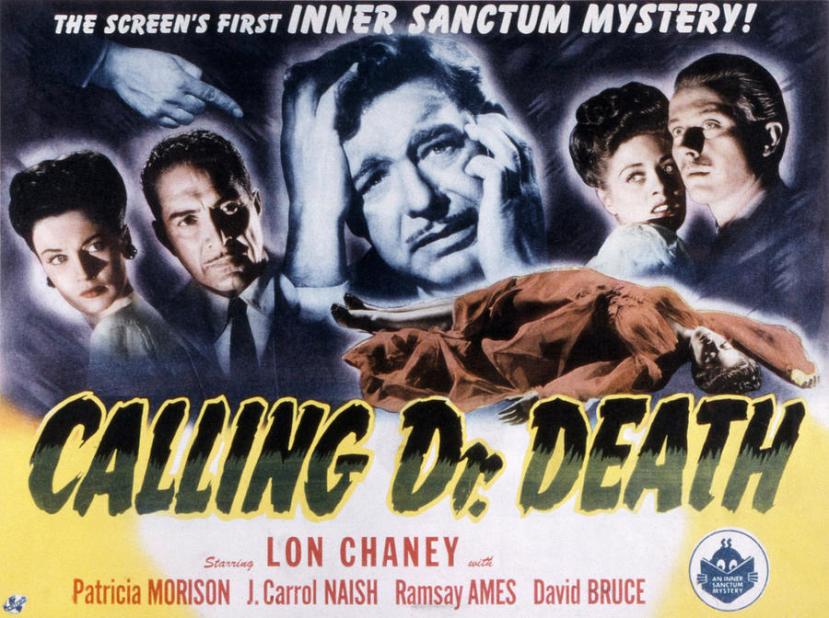 The Inner Sanctum Mysteries was a radio program once upon a time that was popular enough to garner a film series from Universal. Calling Dr. Death is the first such film and it is a decent if predictable movie that is nevertheless, fairly entertaining. Directed by Reginald Le Borg from a script by Edward Dein, the film would star Lon Chaney Jr. who would become the lead in every picture to fall under the Inner Sanctum moniker. That would be a good thing as the man was in his prime and coming off of The Wolf Man, carried a bit of weight with audiences.

Chaney would play Dr. Steele, a neurologist who would often use hypnosis to aid his patients when the need called for it and a man whose life is falling apart. His wife wants nothing to do with him and has taken on a lover, though he only learns that later on, and after a short while he soon becomes convinced that he has murdered her though he can hardly remember doing so. With his thoughts crashing around in his head, a detective beating down the door to try and convict him and his nurse Stella by his side, Steele has to figure everything out before he goes crazy and an innocent man is put to death.

As far as mysteries go, Calling Dr. Death was not that mysterious and it could be chalked up to the passage of time for making it so. When the film was released in 1943 it might have been fresh and original yet going on seventy years later it just tended to be a little clichéd. For all its faults of which that was the biggest, the film did manage to captivate with Chaney excelling as the downtrodden and confused doctor. Much of the dialogue was in voiceover, taking place in Dr. Steele’s mind which was all right for the most part, but it did seem like a bit too much after a time. Supporting Chaney in the film would be Patricia Morison as his nurse and love interest Stella, not to mention being the female lead of the picture. Morison was good in the role and she seemed to get along with Chaney enough so that it looked as if there was some visible chemistry present. Also taking part were J. Carrol Naish as the inspector, David Bruce as the wrongly convicted man and Ramsay Ames as the murdered wife.

Ultimately the film was a good one and it never failed to keep you glued to the screen. Though you can probably attribute that to a combination of everything that went into the movie, it was Chaney that you really came to see. As an introductory picture to the world of The Inner Sanctum Mysteries the film did its job, though by the end you hope that the next five are a little more unpredictable. 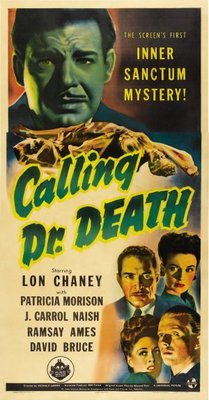