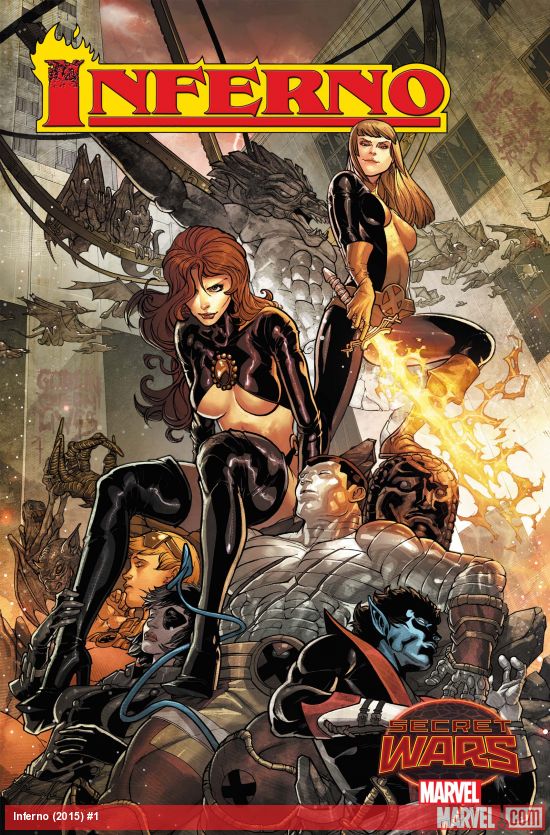 Four years ago Manhattan was turned into a hell on Earth by N’astirh and his demons from Limbo and the one notable casualty of it all was Illyana, trapped there with him all these long years. Colossus is not a happy man and in return for helping Cyclops police the area outside the wall, Cyclops allows Colossus all the aid he can in mounting a rescue operation one time every year to see if he can get his sister back. As of yet, all of those missions have failed. Secret Wars comes to the X-Men and Dennis Hopeless and Javier Garron bring it to life from the Inferno-era of the X-Men’s past and it has turned out to be a pretty exciting title. The best part might be the focus which is placed upon Colossus who as of late has not gotten too much of the spotlight. He is a strong character which has been evidenced over the years and this is the version that has always been the best, the one of the overly concerned brother for his sister. There are many other X-Men present, and while most are the same, many are also different. Cyclops is now the leader of the team and he is paralyzed, finding himself in a chair much like the one Professor X inhabited for so many years. There have also been casualties as Colossus’s yearly incursions into Manhattan have not only been dangerous, but also predicted. Perhaps the only flaw in this whole book is the simple fact that Colossus makes his rescue missions on the same day of every year and while you can chalk it up to grief and anger, the X-Men and Colossus are much smarter than that. Why they do not try it on another day where it would not be expected is very strange indeed. The artwork looks great and Hopeless does an excellent job reintroducing us to a familiar if changed time in the X-Men’s history.  In all, a great tie-in to the current Marvel event.

Dante is tired of being cooped up in the house, but as he essentially has a robot face, he would kind of stand out if he were to go out on the town. It is a good thing then that Halloween is coming up because it is the one day where those who are considered abnormal can pass for what most consider normal. Lucas and Delores have a chat about his predicament, Vivian gets in a fight and maybe because it is Halloween, Frederick and the family get attacked by some ghouls. While this series has been very good overall, the one thing that seems to be missing is a very clear sense of direction. At the moment it plays out like a soap opera with things happening in the lives of our various characters from one issue to the next. The book has never really been boring but it has never really been exciting either. Yes, there have been moments that featured a little action but in all, knowing that this title is going somewhere would probably curate a little more interest in it. There are no villains and that in itself is a bit strange but then this is not your regular type of book either. It would also be nice to delve into Frederick’s history a little more as he is supposed to be this big monster hunter, especially as his kids are now going to be coming into the family business. In all, this issue was good but it did nothing to really advance anything except our characters. So while it features good writing and great artwork, hopefully something of note happens in the next book.