Issue by Issue – The Warlord Annual #2 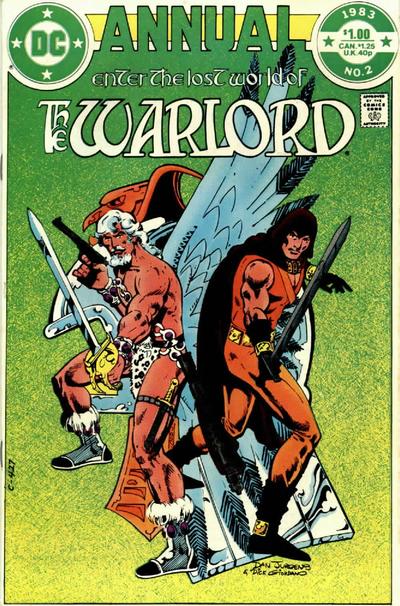 The second annual featuring our erstwhile hero sees him come across a stranger being attacked by some strange looking lizard-dogs.  Being who he is, Morgan jumps into the middle of it, saves the man and is told a strange tale of the Atlanteans from times past who made their way to Skartaris.  It involves a prophecy involving Morgan’s helmet, of good and evil and how when that helmet returns to New Atlantis, the evil shall be overthrown.  So after Morgan and his new friend Krystovar are captured, it just so happens to be New Atlantis that they find themselves in.  Cary Burkett and Dan Jurgens deliver an action-packed tale that is filled with black magic, strange creatures and evil men.  There are mysteries that are solved, such as how and why the Atlanteans came to Skartaris and there are even more mysteries revealed such as how the U.S. Air Force has managed to have their insignia inscribed upon Atlantean tech.  Obviously it will have to do with some sort of time travel, but as the issue is only so long, the solving of this little question will have to remain for another day.  This book manages to introduce some new foes called The Brood, a group of men who have been transformed by magic into strange beast-human hybrids.  Though Morgan wins in the end, it is doubtful that all of the beast-men were slain and it is hopeful that some of them return to seek out vengeance.  Another question that will have to go unanswered for now is the fate of the New Atlanteans.  Burkett delivers a solid tale, worthy of those that have come before and so far, the best of his run up until now.