This issue concludes the rise of Roberto DaCosta to his position as the head of A.I.M.  Yes, it took a lot of money to buy them out, but there was no way it would be that simple and that they would go down without a fight in the end.  As it is, Andrew Forson, the Scientist Supreme is all that stands in Bobby’s way of fully controlling his newfound business and if he has to take a few punches to make it a reality, then he will do so, but not without giving a few in return.  Frank Barbiere brings the goods once again in this tale that takes place before the events currently unfolding in Avengers and New Avengers and it features Sunspot in the lead role which as of late, has seemed like a natural fit.  Some might think it is strange to see Bobby not only leading A.I.M. but the Avengers as well, and they would be right in a sense, but it is a nice progression of the character and one that is long overdue.  He cannot simply be the same, young playboy that he was, always hanging out with Sam Guthrie and the New Mutants and seeming like there is nothing else in life to do by goof around.  We have seen that character for many, many years and it is great that Jonathan Hickman and Frank Barbiere have decided to do something with him that frankly, most have probably never even considered.  This book also sees Hyperion with full beard make an appearance and a great battle between Sunspot and Forson in the skies over A.I.M. island.  Marco Checchetto delivers some incredibly solid pencils yet again and the colouring from Andres Mossa is absolutely stunning.  This has to be one of the prettiest books coming from Marvel bar none and it is great to see them cultivate such fantastic talent on their titles.  Though the Marvel Universe is in for a shakeup courtesy of Hickman and Secret Wars, it would be nice to see Bobby continue on with some of the maturity and great characterization that has been given to him when all is said and done. 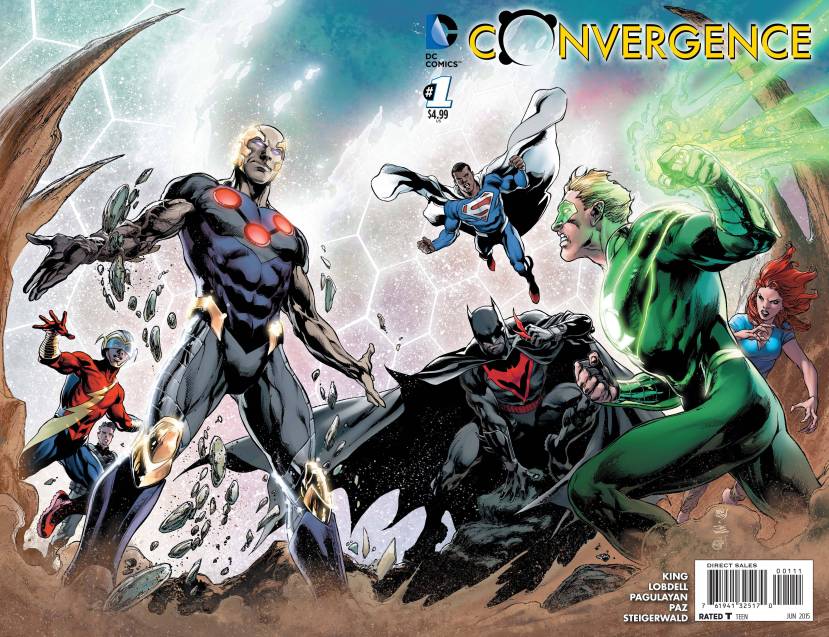 On the whole, Convergence #1 was much better than the zero issue even though they do essentially the same exact thing with only a few changes here and there.  Instead of a Superman being brought to the planet Telos, a group of the Earth 2 heroes are instead featured which includes among their number, Batman, Green Lantern, Flash, Grayson and their Superman.  They realize something is wrong as one moment they were battling Darkseid and then the next, they are not.  Soon Telos, the representation of the planet, meets with them and explains what the planet is for, why they are here and what is to take place.  The issue sets everything up competently and it is written much better than the last, but it is like reading the same thing all over again, much like watching a remake of an older movie except the original only came out last week.  It is great to see the Earth 2 heroes doing something other than fighting Darkseid, except they are still going to be fighting for the survival of their planet, just against somebody else.  Once again we are treated to some splash pages featuring a look at many of the other world’s that will be taking place in this tournament and they look quite fantastic courtesy of Carol Pagulayan.  So after a little confusion and a little conversation and a lot of declarations from Telos, the issue ends with the promise of action.  Let us all hope that the second issue actually does something.