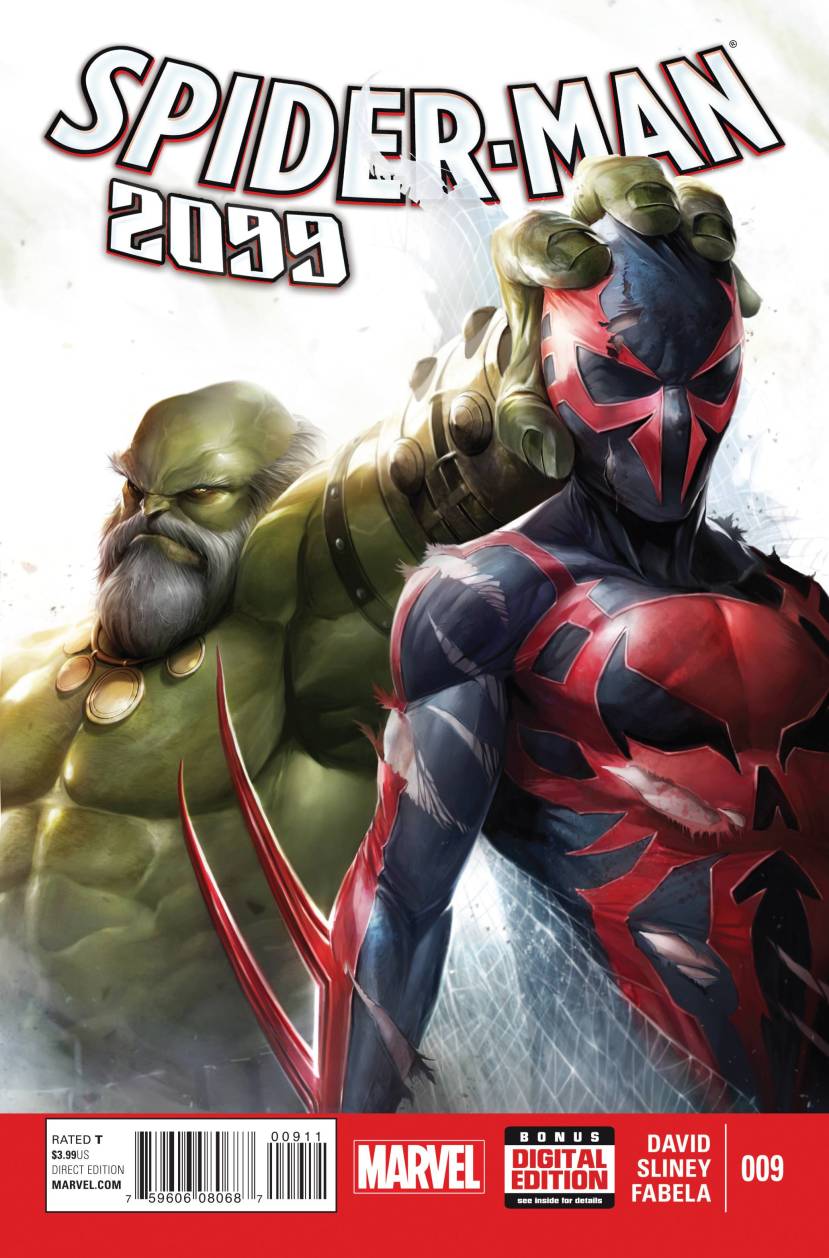 When Spider-Verse ended, Peter Parker was sending everyone home to their own times and dimensions which is where Miguel thought he was going.  But things could never be that easy and Miguel finds himself somewhere that is sort of familiar, but very different.  He also has one small problem in the form of the Maestro.  If there is one character that fans like to see Peter David write, it is the Maestro, the older, crueler and more insane version of the Hulk.  Miguel of course, thinks he can get away from the man, mostly through the use of his witty banter and a little trickery, but the Hulk, old or not, is no fool and Miguel pays the price for it.  So while Spidey sits in a prison of his own making, though there was a good chance he would have ended up there anyways, he meets one of his former compatriots, Strange – the 2099 version of Dr. Strange.  Will Sliney, along with David, compose a really fun tale that takes our hero from one essentially terrible situation and throws him into another.  The man cannot just catch a break it seems and with literally no time to rest, he now has to deal with someone who might be just a little bit worse than the Inheritors.  For the reader, it is fantastic as we have not really seen anyone decent go up against Spidey in quite some time and while the book has been quite entertaining, the book has really been coming into its own during the last few issues.  What would be nice to see is a resolution to the storylines that were initiated in the first number of issues.  It feels like everything has been left hanging and there a large number of plotlines that need wrapping up.  That is of course, if Peter David decides that our hero does not intend to return to the modern Marvel Universe.  Like all things, we shall just have to wait and see.

Is the Joker behind everything that is going on in the new Arkham?  He might be or somebody just wants everyone to think that he is.  Batman has a fight with another psycho in the meantime who turns out to be just one of the men who helped transform the house into the asylum it now is.  Mr. Freeze is still somewhat of a nice guy for some reason and being very cooperative and Batman thinks he has another lead, though what he finds might not be to his liking.  This book has been getting better as it has been going along, but it is already too late as it has been slated for cancellation.  That will not stop our creators though from wrapping up the mystery they set out to tell from the very first issue.  So far it has been fairly interesting and has featured a very abnormal amount of action for taking place in an insane asylum, but such as it is, it has been fun and the tale keeps taking you down one road, thinking you know where it is going and then swerving down another.  Gerry Duggan seems to understand the characters quite well and with Shawn Crystal’s help, has turned Wayne Mansion into a pretty scary place to live now.  Most of the inmates seem fairly tame, as far as lunatics go, and while it would have been nice to see some of that side examined more, we get what we get and luckily, it has been quite enjoyable.  What has been the most fun of all is seeing Batman perplexed, trying to solve a mystery taking place in his very own home and not being able to do so.  At least not yet.  Only a little farther until the finish line, so hopefully the conclusion lives up to our expectations.