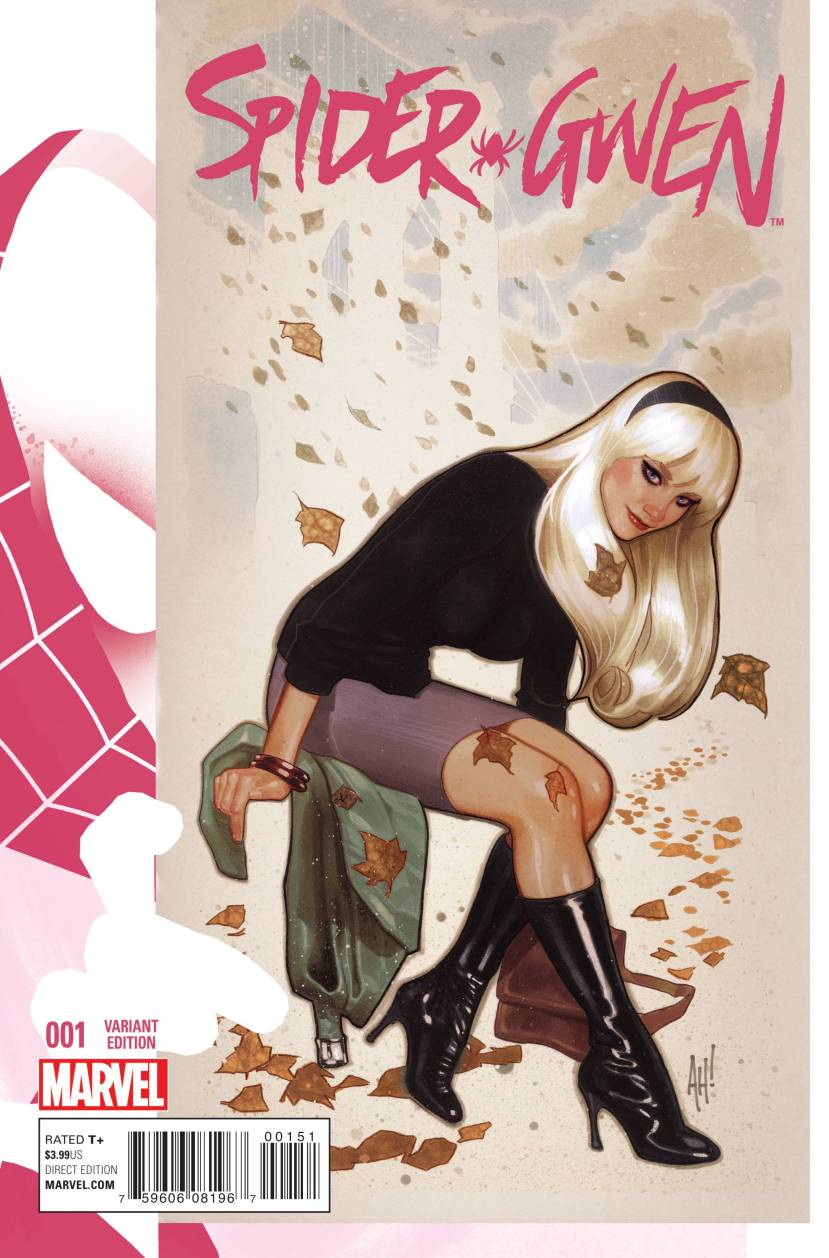 Gwen is back on her home world and things have not improved any as she is still enemy number one according to Mayor Jameson as well as most of the city, at least as Spider-Woman.  To make things worse, she is no longer a member of the band The Mary Janes and she’s having a few problems connecting with her dad at the moment.  Oh, and the Vulture is causing a little havoc in the city.  The phenomenon that is Spider-Gwen continues here in the first issue of her new ongoing title and to put it lightly, it is simply fantastic.  Jason Latour and Robbie Rodriguez bring our hero home and we find that while things are obviously different on this world, her life mirrors that of Peter Parker fairly close.  From being public menace number one to being cash-strapped, on the outs with those she calls friends, it all follows Peter’s life fairly close.  A big difference between the two is the fact that she revealed her identity to her father, unlike Peter who never told Aunt May.  There was a lot to love here, like beat cop Ben Grimm, Captain Frank Castle who is replacing Stacy on the Special Crimes Task Force and this world’s Mary Jane who is really quite hilarious.  In fact the whole book is filled with humour and Latour has a good handle on it, eliciting chuckles at a constant pace throughout the story.  A good portion of the success though, has to go to Rodriguez whose artwork is a perfect fit for the book and really elevates the enjoyment factor.  Over the years there have been many Spider-Women, but none that have held that same magic that Spider-Man has always had.  This title does and it brings the old-school fun with a healthy dose of action and a lot of witty banter to really round the book out.  An excellent start from Latour and Rodriguez for Marvel’s latest wall-crawler.

Jason Aaron and Ron Garney bring their series Men of Wrath to a riveting, if unexpected conclusion.  There is a shocker to be had when one of the main characters dies and it was so out of the blue that it makes you take a breath.  Just when you thought everything was going to be all right and the book might get a happy ending, Aaron and Garney go and snatch it away and make you think yourself a fool for ever considering it in the first place.  It should be expected at this point, as this series has been nothing short of surprising at how violent and how unpredictable it has been.  The Wrath family is resilient, bred from hardy stock and no matter how evil they might seem to be, everyone knows, it is hard to keep a ‘good’ man down.  Garney delivers some really solid pencils, just as he has the entire series, very moody and evocative of some of the best noir thrillers of years gone by.  Together, he and Aaron have crafted an exceptionally strong crime-drama that never fails to stir up emotions in the reader, whether it is excitement or horror, you are always captivated and they keep you glued to each and every page.  The best thing and the worst thing about this series is the ending.  It was perfect, but the fact remains that it also ended when you would have liked it to go on.  This is a miniseries that demands to be read and if you have not done so, go and pick it up.  You will not regret the decision.