Guardians of the Galaxy & X-Men: The Black Vortex Alpha

The latest crossover event in the Marvel Universe starts off with a little history on the Black Vortex, an object of great power given to a race of aliens from a Celestial.  Cut to the present where Star-Lord and Kitty decide to steal it from his dad, a little too late as it were as all of his men have been powered up but, better late than never.  They cannot handle this alone though, so they call in the reinforcements which just so happen to be the Guardians and the X-Men.  Sam Humphries and company bring the fun and excitement to this first issue and it could not have gone any better.  Humphries has an ear for dialogue and the book is full of sharp wit and humourous banter coming from all directions and though the issue is a little extra-sized, it flies by as if it were nothing at all.  This crossover is of course about Peter, mostly, and his relationship with his dad yet due to J-son’s actions, it necessitates the involvement of more than just the Guardians.  We learn a little about the Black Vortex, of its power and destructiveness and how it seems like a boon at first, but over time corrupts, which was the whole reason it was locked away for so many years.  Letting J-son keep a hold of it is of course a mistake, thus the reason for getting it away from him, but keeping it from him will be no easy task.  Another problem that arises is dissension in the ranks as some of the heroes want to destroy the accursed item while some think they should use it.  Humphries then leaves us on a neat little cliff-hanger that could really, go either way.  So far the book and the crossover hits all the right notes with a nice balance of drama, action and comedy and as of this moment, looks to be a promising storyline. 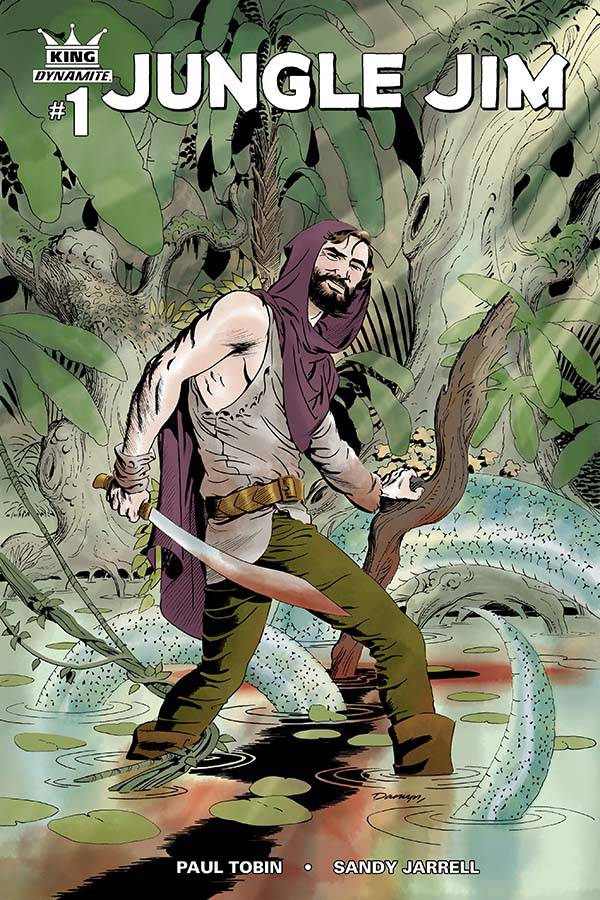 Another King Features Syndicate hero makes his solo title debut with King: Jungle Jim, a charming and fun little tale much in the same vein as Jeff Parker’s Flash Gordon run.  Here it sees a group of people on a quest to find the mysterious Jungle Jim, a man or creature that has not been seen in forever, on the planet of Arboria.  Chronicling this tale is Paul Tobin, who takes the familiar Flash Gordon setting and explores it a little further which is really nice to see.  The characters are all native residents of the planet which is also a good thing, and they take the lead with the actual Jungle Jim taking a backseat in the title, at least for this issue.  As it is, it works really well and Tobin sets up a little mystery about the man who is kind of like The Phantom in a way, but able to actually transform into different creatures and control the jungle itself.  There are a couple of questions that eventually come into play such as why has he hidden himself away for so long from everyone and if he is an Earth-man, how is it he is on Arboria?  To go along with the entertaining script are some great pencils by Sandy Jarrell whose style is akin to Evan Shaner’s, with that nice clean look and that retro feel to it.  It is good to see Dynamite putting people on the books whose artwork is somewhat similar to what has come before, giving it a nice flow from series to series.  Of course, as it is only a four issue mini, our ragtag group does indeed find the mysterious man, though exactly what for has yet to be revealed.  Jungle Jim has started off solidly and is a great addition to the line.