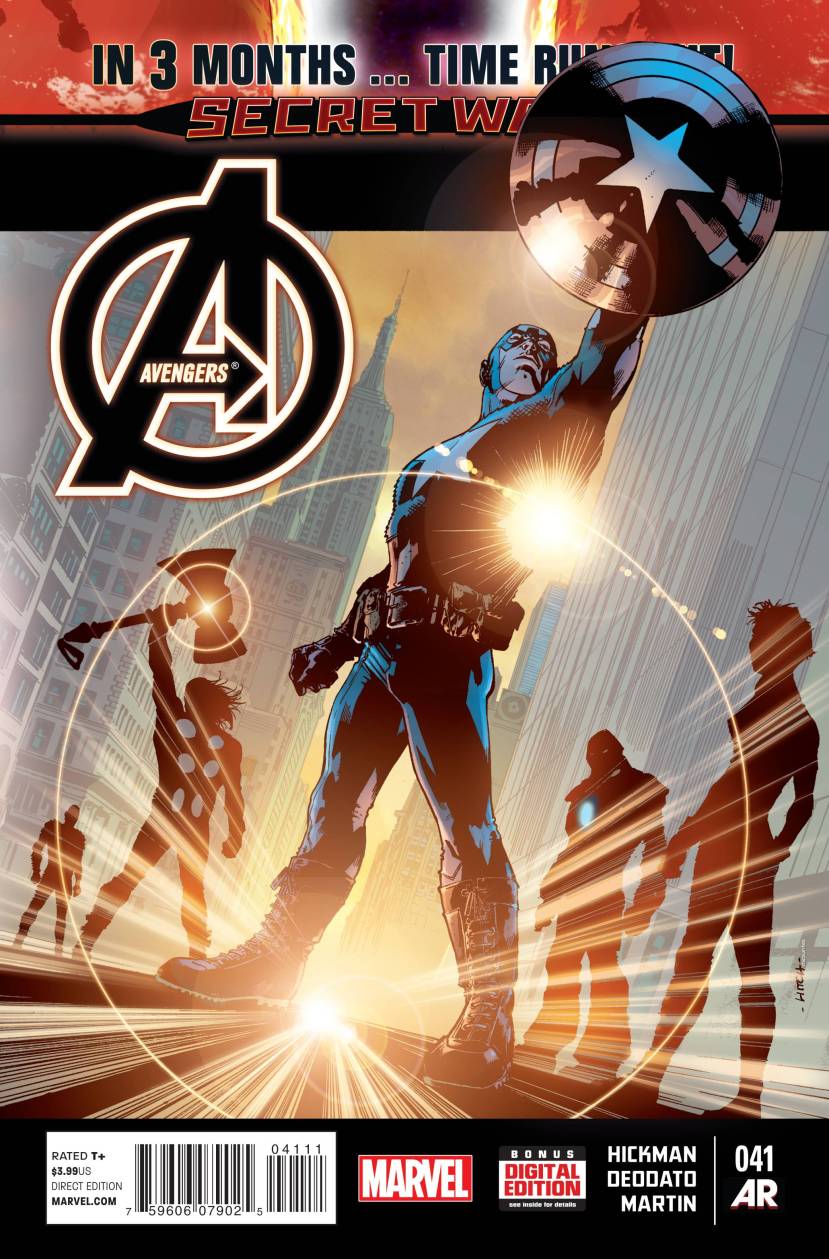 As is soon evident in this issue, the Cabal is not dead and for those thinking that they were, there was no possible way that Marvel would have let Thanos or Namor meet their end especially as the former is playing a huge part in Marvel’s cinematic universe.  How they escape their end is smart though they have little choice, and as they have quite a bit of power between them, it is not hard to see that they would not have been able to survive.  And as this is leading into Secret Wars and the much ballyhooed end of the Ultimate Universe, it too makes an appearance as was pretty evident by the cover of the issue.  Looks like that universe’s Nick Fury wants to rebuild S.H.I.E.L.D., which could be a scene right out of the next Avengers movie, and to do so he wants the help of Reed Richards, the smartest man in that universe.  Jonathan Hickman reveals some interesting facts about this younger Reed that may not only affect the 616 and the Cabal, but also the upcoming event and whether these revelations are going to be for good or bad, we can only wait to find out.  There is a scene with Gladiator that could also prove to be intriguing going forward and the consequences of that might just be something that could push our heroes to their breaking point on top of dealing with the incursions and everything else at the moment.  One of the best things about this issue is that you do not have to know anything about the Ultimate Universe to understand this story.  Hickman treats it just as he has treated every other universe so far in the series and as such, it is accessible enough that you learn what you need to know in these pages without having to seek out anything else.  It does however pique your curiosity to go and read some of those stories though.  Given the end of the issue, the next one should be a whole lot of fun.

With the revelation last issue that Brainiac was making his way to Earth, our various heroes realize that he is actually already here.  After forty issues, the book finally picks up with the big bad making an appearance, or at least one of those big bad’s and Superman finally shows his face out in public.  Over the title’s history, with some issues being really good while most were not, it was great to see this issue just explode with action as Brainiac makes his presence known.  Stormwatch finally makes their way back to Earth and they hook up with the JLA to take on the threat but they also take a loss as the Engineer reverts back to her possessed self, much to the disappointment of everyone. But with the threat looming large, Angie is just a drop in the bucket and they are going to need all hands on deck without being distracted.  As Brainiac starts to encapsulate New York, Batman, Plastique and the former Red Robin make their way to T-Tech only to find a massacre has gone on inside the building.  There is one really interesting moment when Batman chastises Tim for essentially giving up on the job and it almost seems like Batman has known where Tim has been all these years, which would also be a little surprising because it would then seem like he also allowed Tim to have his space and live a normal life.  With Superman’s return, what would be nice to see at some point is the reasoning why Superman disappeared from the public for so long.  It was mentioned, but it would be great to actually see the incident as it would actually give his actions some context.  This issue was definitely a step in the right direction, just a shame that it took so long to get here.