For a science-fiction film, I Married a Monster From Outer Space is fairly melodramatic.  Almost like Peyton Place, though perhaps not quite that melodramatic.  The point being, this is more soap opera than anything else and surprisingly it works very well.  Why not have a soap opera with science-fiction elements?  As it is, this movie finds Marge marrying the man of her dreams, only to find out that he is not in fact a man, but an alien.  He is a member of a species who has come to Earth in order to save their race as they have no women and are unable to procreate.  To do so, they must seek out other races on other planets in the hopes that one of them will be able to bear their children.  Marge of course, does not want to have alien babies and proceeds to find somebody, anybody that will believe her story.

While the movie features a premise that has been seen many times over (Invasion of the Body Snatchers), director Gene Fowler Jr. takes the script by Louis Vittes and turns it into a solid little film.  This is your average, small town slice-of-life movie where everybody knows almost everybody, except with aliens.  The aliens do go about it smartly, abducting and cloning various humans and keeping them alive to absorb their memories in order to blend in so as not to be conspicuous when around other people.  The alien which took over Marge’s husband Bill does a fair job, but even after being together for more than a year, he still messes up and it is a wonder that Marge did not catch on sooner.  Love is blind they say. 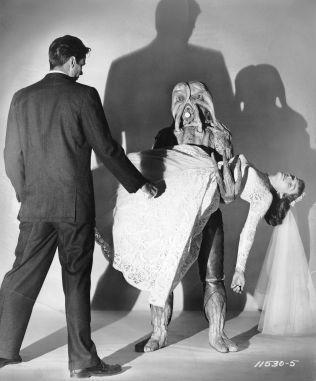 Tom Tryon would star as Bill, the first man to be replaced by an alien.  Tryon does a great job, with a very subtle performance as Bill tries to fit in with those around him.  It is funny watching alien Bill trying to remember to do all of the things that normal humans do such as turning on lights and such even though he has no need for them.  Starring opposite him is the stunning Gloria Talbott as his wife Marge.  Even though she seems to be a very smart and capable woman, it takes her a long time to finally start doubting her husband, though she has absolutely no idea just what it is she is in for.  Watching her deal with the inability to have children is a little sad as she does not know that it is because of the aliens, as is the death of the dog by Bill’s hands and seeing her deal with his general demeanor which finds him on edge more often than not, or angry all the time, and you feel bad for the woman.  It works overall though as she does eventually get her happy ending and it makes everything worthwhile.

Though the film might tend towards being a soap opera, there are some genuinely creepy moments, the biggest one of all being when Marge realizes what her husband really is and all the implications that go along with it.  Another moment that stands out is when a couple of the aliens are talking about mating with human females, sounding skeevy and lecherous, never mind being just eerie and disturbing.  These scenes and more give this film a slight shadow of darkness as no matter how well they blend in or how nice they might seem at the moment, even Bill towards the end, these aliens were not here on Earth to make friends.  They came to Earth for one reason and if they could not get it through deceit, they would most likely have taken it by force.  In the end, I Married a Monster From Outer Space is a truly entertaining film, moody and atmospheric and even slightly thrilling at times.  With some fine performances from all involved, a great creature design and some tight direction by Fowler, the movie is one you could easily watch again and again it is so much fun.