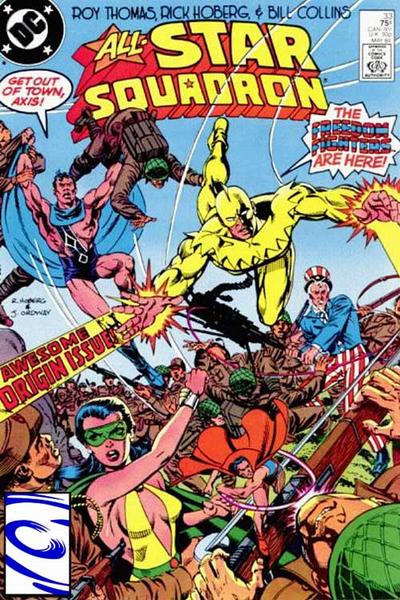 Uncle Sam and his new team, the Freedom Fighters, have returned to Earth X to take on the Japanese threat invading Santa Barbara.  On this particular Earth, there was no invasion of Pearl Harbor so the forces they face will be formidable indeed.  Meanwhile, back on the Squadron’s home planet they are following some clues which lead them to the Japanese hero/villain, Tsunami.  Lastly, the Spectre is having problems of his own and if he is not successful in his endeavors, both Earths might perish.  This was a fun issue by the creative team of Roy Thomas and Rick Hoberg, one that even amongst all the action has time for some drama.  Over the last number of issues, things have been strained between Liberty Belle and Johnny Quick, with the stresses of leading the team taking a bit of a toll on Belle and Johnny feeling less a man with the rest of the Justice Society around all of the time.  But action there is in the book and lots of it.  The battle against Tsunami is fierce and quick, with a casualty taking place, one that has Tsunami flee the scene in shock.  Uncle Sam and his team do their best against the invading forces of Japan, but even with the might they hold, it may not be enough against the combined forces that are up against them.  All of this including a dire threat that could tear the two worlds apart and Baron Blitzkrieg too, and the book could not be any more exciting.