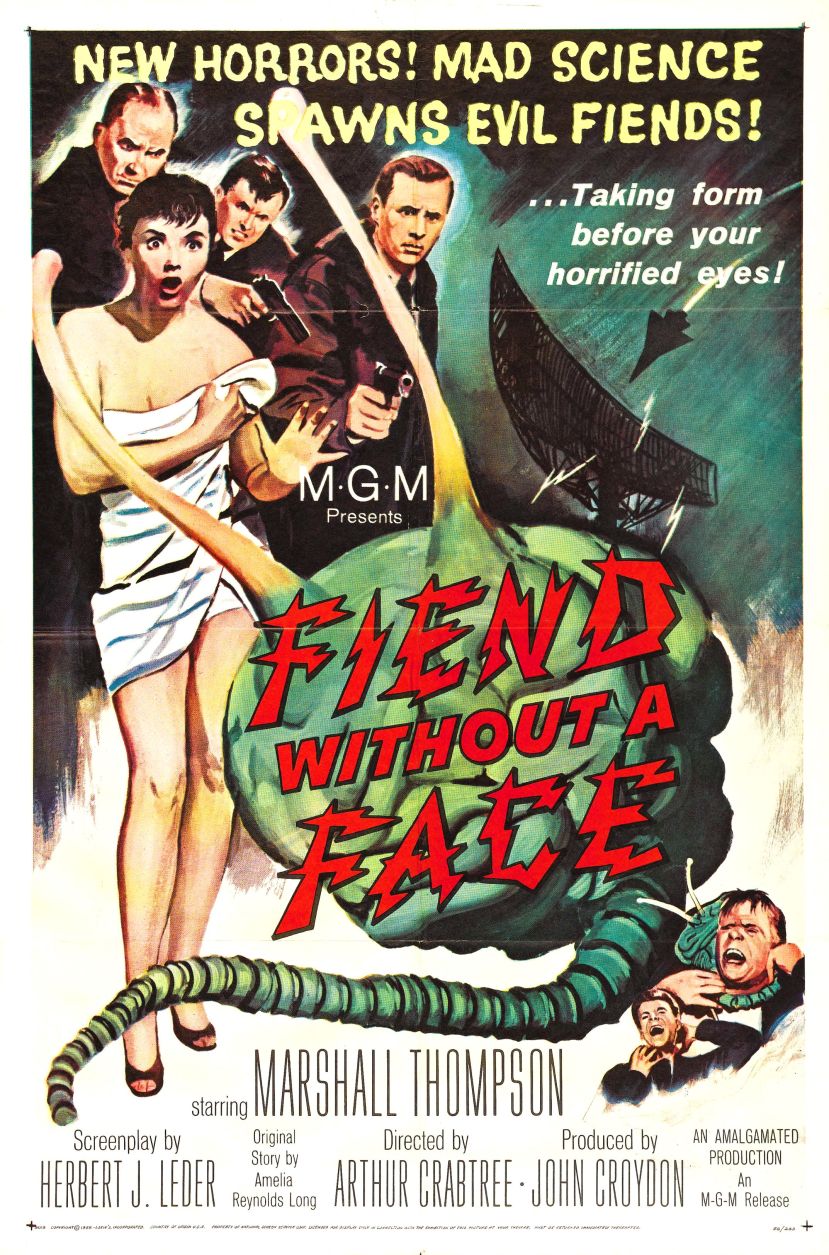 Sometimes when you have miniscule budget, you make do with what you have and thankfully the story for this film did not ask for much until the very end of the movie.  Such is the case sometimes when making a film and Fiend Without a Face does an exemplary job of it.  This movie finds Major Cummings investigating a series of unusual deaths in Winthrop, Manitoba.  The case is befuddling to say the least, but he soon thinks he knows what is what when he meets a British scientist, supposedly retired, who is working on books about telekinesis and though projection.  Thanks to some nuclear experiments involving radar on the American base, Professor Walgate’s thoughts are being powered up so far as to not only come alive, but whereas they were invisible before, they are now appearing as if out of thin air.  They are also horrifying to say the least as they look like floating brains with eyes and spinal cords.  These ‘brains’ have also drained enough power to be able to replicate and with more of them around, more people will be in peril unless these fiends can be stopped. 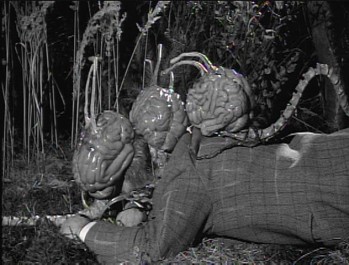 Written by Herbert J. Leder who also wrote The Frozen Dead and directed by Arthur Crabtree who would go on to direct Horrors of the Black Museum, their collaboration on Fiend Without a Face would result in a very imaginative piece of science-fiction and horror.  The creatures themselves, which were brought to life with stop-motion animation, were fairly gruesome to look at, even now sixty years later.  One of the best things to come out of this picture were these very creatures and their design.  Instead of just having your normal human-shaped or bipedal creature, here was something different and innovative that had rarely been seen in a film at this point in time.  The animation was a bit jerky at times, taking a little away from the film but in all, it looked really good and was quite effective in generating that feeling of dread and horror that everyone on the film was going for.

What is also interesting in this film, and many others of its kind back in the day, is how people were willing to explore so many genres and ideas.  Usually when a science-fiction movie is released today, it is just a simple ship out in space type of deal, some sort of variation that might include aliens and a little exploration, but all technically along the same lines.  In Fiend Without a Face, it is the human mind and the possible limits of what it can and cannot do that are explored.  It makes you yearn for films that do more than just give you an action movie with a science-fiction element.  Sometimes you want to ponder the potentialities of things, and simply enjoy the strange and wonderful ideasj that the human mind can dream up no matter how implausible or dubious they might seem.  Living, flying brains come to life through a combination of thought and radiation?  Why not?  If there were more films like this, the film industry might be a little healthier than it is currently.

For a small budgeted film, it does manage to rope in some fine actors in the form of Marshall Thompson who stars as Major Cummings and Kynaston Reeves as Professor Walgate, the somewhat unwitting villain of the movie.  The beautiful Kim Parker plays Barbara Griselle, the assistant to the Professor and love interest to the Major and not to be forgotten are Michael Balfour, Terry Kilburn and Gil Winfield who all do just as fine a job as the leads.  So not only does it have some great special effects, but some fine actors a decent story and some very good direction too.  Really, if you need a science-fiction film to watch, something original and a little daring, at least for its time, then this is a film for you.  Add in some decent pacing and a short running time, you simply cannot go wrong watching Fiend Without a Face.