Spider Baby.  The title says it all.  You know by those two simple words you are going to be in for a treat and whatever you are expecting does not even come close to the truth.  At first, you might think that this is some strange piece of 60’s psychedelia, and perhaps you are partly right, but in fact it is one of the greatest horror movies of all time.  The name on the marquee alone should grab you as Lon Chaney Jr., horror film icon and a fantastic actor to boot, with this, his role in Spider Baby ranking among his very best.  If that was not enough, the film has murderous, inbred children, cannibalistic relatives, Sid Haig as an overgrown man-child and a home that might as well be haunted it is so run down.  Written and directed by Jack Hill, it took a long time for the film to finally hit theatres due to many complicated matters, but when it did, the end product was a pot of insanity few had encountered at this point in time, but definitely a welcome one. 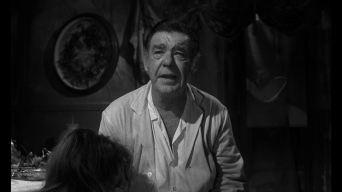 Lon Chaney Jr., the star of the film is simply fantastic in a very understated performance, the kind he perfected twenty years previously.  Here, after the death of his master, he takes on the role of the patriarch, trying to hold the master’s family together through the years and doing a successful job of it for the simple fact he is still alive to keep doing it.  This in itself is a feat worthy of mention as Bruno, Chaney’s character must deal with a family of three inbred children who suffer from a disease that makes their minds devolve and regress the older they get.  And while that might seem hard in and of itself, Virginia and Elizabeth, the two sisters, feel the need to murder anyone that is foolish enough to visit them.  While Bruno keeps trying to teach the children that hate is wrong, losing that battle daily, and tries to keep them from killing, when they manage to actually do so, getting rid of the bodies is easy as down in a pit in the basement is Uncle Ed and the rest of the family who just so happen to be cannibals.  As you watch this film you wonder why, after the master of the house and father to the children has passed away, did Bruno stay on?  Was it a strong sense of loyalty or is Bruno just as disturbed as his surroundings?  Maybe it is neither or maybe it is both, but you can tell that Bruno obviously loves the children despite what they do.  One thing that Chaney has always been good at was emoting and because of that you always know what his characters think and feel and it adds to the overall success of every film he has always been in.  As an added bit of strangeness, he also sings the theme song of the movie!

While tipping your hat to Chaney, there were a few other players in the game including Mary Mitchel, Karl Schanzer as Schlocker, Quinn Redeker as Cousin Peter and Carol Ohmart as Emily Howe.  Ohmart, who had very little to do or say, is in the film as the token eye-candy, at one point modeling her underwear in the mirror for an inordinate amount of time as Sid Haig’s character Ralph watches on.  Soon she is then raped by Ralph, becomes obsessively fascinated by him for some reason and then goes absolutely crazy and murderous.  Aside from Chaney though, the two who would steal the show would be Beverly Washburn as Elizabeth and Jill Banner as Virginia with the latter exuding a little more star power than the former.  Virginia, the aptly titled ‘spider baby’ of the film, lures those who are unwitting enough into her web and then proceeds to murder them, a blade in each hand.  The film gives off an air of insanity and horror for the most part, but when you look into Virginia’s eyes, you actually believe that she has lost her mind as you see the emptiness there and that she will indeed kill you if given half the chance.  Banner’s performance is chilling and without her, the movie would not have been the same.  Washburn was good and Chaney was better, but newcomer Jill Banner made this film what it is.

Spider Baby was and is an excellent portrayal of a family gone off the rails.  It is a film whose madness has gone on to inspire other filmmakers to create their own portraits which you can see in  Rob Zombie’s House of a 1000 Corpses, which coincidentally also stars Sid Haig.  With this film, Jack Hill created a masterpiece, though little did he know it at the time.  It was eerie, suspenseful if slow moving and truly frightening at times with its picture of mental illness.  With references to the Wolf Man throughout and some exceptional performances from those within, for those that love the horror genre, Spider Baby is a film that has to be seen in all its macabre glory.