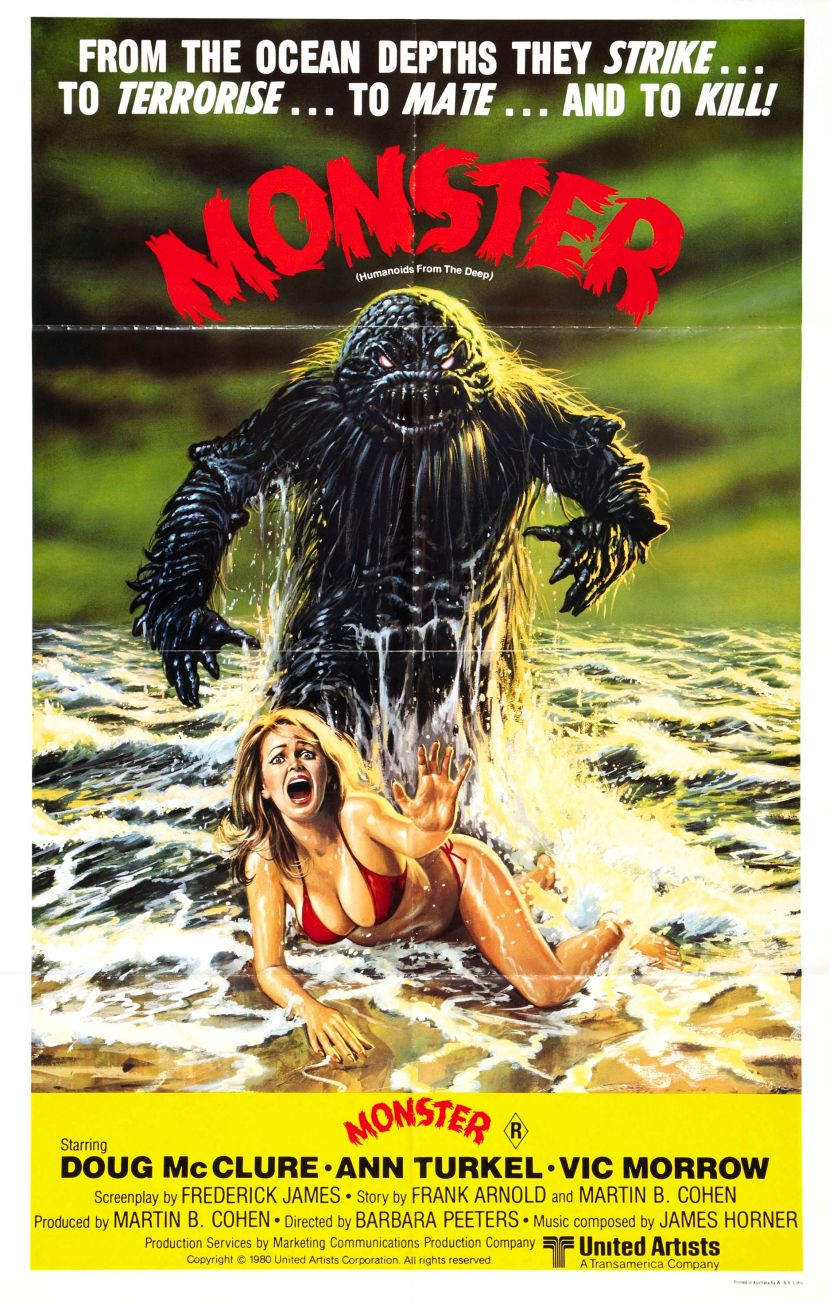 Although Roger Corman might have only been listed as an executive producer, you can feel his handiwork all over this picture.  In fact, aside from the haircuts and the modern trappings from 1980 found within this movie, it could have been filmed twenty years previous, so familiar is its premise and execution.  You have your campy dialogue; this time provided by Frederick James, you have your silly looking costumes, though they so seem somewhat better than some of the stuff Corman used to make do with.  You also have the standard brand of actors that Corman often went for, those either unknown to save on budget or those that are just the slightest bit famous and who you recognize when you see them, but are unable to place them no matter how hard you think.  Directed by Barbara Peeters, she does a good job of tying this creature feature together, and actually delivering a fairly quick-paced film that never overstays its welcome.

The movie details the tribulations of a small town that is having a hard time sustaining its fishing industry, and it becomes even harder with the advent of a large corporation coming in to do the same thing, taking the jobs away from the little guy.  What is probably worse than that though, are the strange creatures who come up from the ocean and start killing most of the men-folk and raping the women.  One poor girl even survives and becomes pregnant.  Soon it is all-out war between the townsfolk and the creatures with casualties piling up on both sides.

Being a horror film, it does present a lot of blood, the occasional gore and of course, a little nudity.  The creatures themselves are quite the hideous looking beasts, though the costume effects while not necessarily terrible do make it hard to take them seriously.  After so many years, you would think Corman could splurge for something just a bit little better, yet he depends more on the mood that the film generates and relies on everything else to tell the story hoping that the movie does not fall apart once the creatures make their existence known.  Luckily, for the most part, Corman is usually right as you can forgive these horrid man-suits and enjoy the story for what it is.  But, without these corny creatures, this would not be a Roger Corman film and whether he directed it or not, this is indeed a Roger Corman film.

The cast is decent and really, what more could you ask for in a film such as this?  Doug McClure takes the lead along with Ann Turkel, Vic Morrow, Cindy Weintraub and Anthony Pena.  Turkel and Weintraub were probably the only ones out of the whole town to get away or at the very least were among the very few to escape the rampant raping gong on by the creatures.  Why the need for that was never explained.  Perhaps the creatures were on the brink of extinction and there were no female members of their species left, or maybe they just had a thing for human women.  Whatever the case, the unexplained is always a popular feature in films that Corman has a hand in.  The fact is, the creatures do what they do and there is no reason needed, nor should you as a viewer need one.  You know what you get when you head into one of these films and more often than not, it just so happens to be a good time, killing and ravaging aside.  Humanoids From the Deep was a fun film, despite its faults, a lot of fun in fact and you cannot help but have a great time while watching this.  It is formulaic and repetitive, but it is everything you love about monster films and is worth a watch if you have the time.