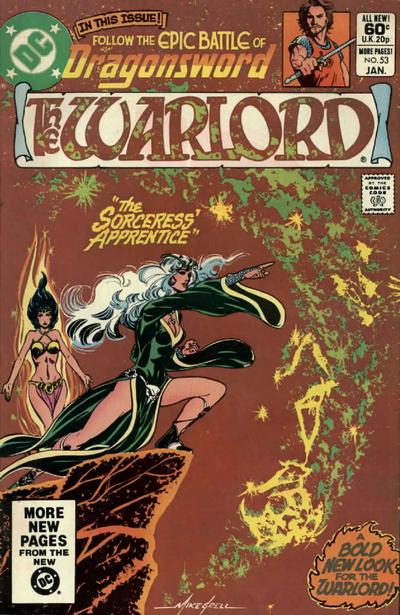 In a continuation from last issue, Travis Morgan is still trying to get home, to Skartaris that is and the beautiful Tara.  To do so he must go through a number of Russians who are intent on stopping him.  Funny thing is he will not be stopped.  Meanwhile, back in Deimos’ castle, Jennifer still remains lifeless yet the witch Ashiya means to fix that, not only because she bears no ill will towards the girl or to Morgan, but because Jennifer will also serve a purpose towards her own goals.  The most fascinating thing about this issue did not have anything to do with the actual story but about the production of the book as this is the first time that Mike Grell did not supply the pencils for it.  Instead, Mark Texeira would lend his expertise and funny enough, his pencils are so strikingly similar that it you may not have noticed if not for reading the creator credits.  As such, he does a fantastic job, just as good as if Grell were pencilling and the book looks amazing.  There is a ton of action to be found with Morgan battling it out with the Russians and is a nice balance to what is going on with his daughter back at the castle.  Just what Ashiya has planned remains a mystery at this point, but it cannot be anything truly altruistic.  Probably the most exciting moment of the whole book was seeing Tara ride in to save the day.  It is not often that she really gets to shine and seeing the tables reversed like they were was a nice touch on Grell’s part.  While part of this storyline might be over, it looks like Jennifer’s is just beginning and it should be very interesting to see where it leads going forward.