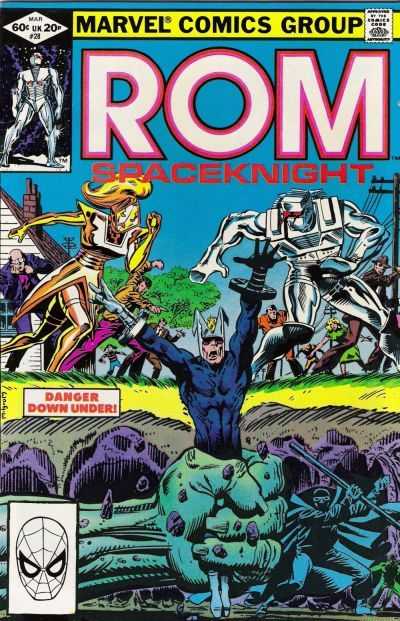 Galador is lost to the Spaceknights and so instead of pining over a home they might never find again, they decide to do what they were enlisted for and seek out the Wraith menace wherever it might be and eliminate it, thereby ensuring Galador and the universe remains safe.  So thanks to Starshine’s power, she sends the Knights off to the various corners of the galaxy and sends Rom back to Earth, to which she tags along.  Bill Mantlo crafts another fine issue that brings Rom back to Clairton, though too trusting and none the wiser that the town has been taken over by Dire Wraiths.  Starshine is a little skeptical when she first arrives; knowing that the Wraiths could be anywhere, but Rom is sure of what he knows which just so happens to be wrong on this occasion.  The book has a tragic end, one that just came out of nowhere, but proves that Mantlo does whatever it takes to further the story, good or bad.  The one fault that the book has at the moment is the overuse of Clairton.  So far, all of the stories that have taken place make sense and justify the use of the small town, but it is becoming overused and a little stale.  When Rom took off to Galador it gave the book a freshness it had not experienced in a while and it was nice to see something a little different.  Hopefully, now that Rom is back on Earth, he further explores the planet instead of remaining locked in just one small part of it.  Mantlo does give the book a nice balance between the drama and the eventual action that takes place in the issue which is good to see, and with some great artwork by Sal Buscema and Joe Sinnott this issue is another win for the team.