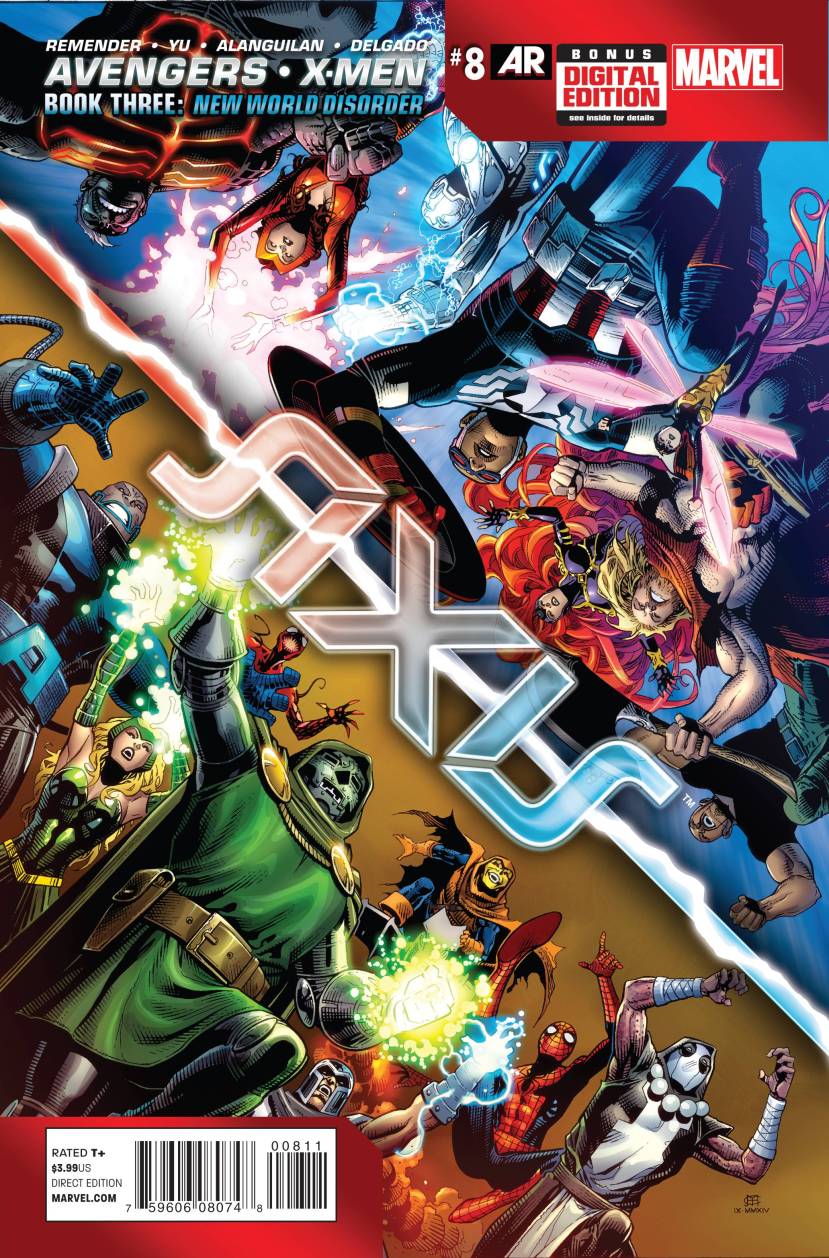 Last issue the inverted villains went up against the inverted X-Men, but things did not go too well.  This issue the inverted heroes go up against the inverted X-Men with the inverted villains recuperating and joining in as well.  So it is that we see match-ups like Thor versus Apocalypse, Rogue versus Kluh (the inverted Hulk), Havok versus Falcon-Cap and more.  Remender still has the Scarlet Witch going crazy over in Latveria and just for the occasion, brings back Doctor Voodoo from the dead who as some might know, will be in the new Uncanny Avengers title spinning out of this event.  What is most interesting about this little revelation is not that he is back, but it is Doom who has done the bringing and even made a deal with a literal devil to do so.  Normal Doom is usually pretty great, but inverted Doom has been doing a lot of crazy things lately (Avengers World) and has been one of the best things to come out of this series so far.  One thing that this book has been doing is not making the X-Men any friends, even more so, it is destroying whatever goodwill they had cultivated in the world up until this point and should make things extremely hard for them going forward in their own titles going forward.  Leinil Francis Yu provides some fantastic artwork for the book and that last page with the cliff-hanger, while fairly simplistic in design, is a exciting and promises one awesome fight for the next issue.  This second-to-last issue of the series also happens to be one of its best, which is a case of better late than never.

Batman Eternal takes a break from the action this issue to catch up on what everyone is doing.  Batwing is having problems with his armour of the mystical kind while Selina is doing her best at ruling the combined gangs of Gotham which really takes a lot of doing, but better at the top than the bottom.  The various criminals that escaped Arkham when it sank into the earth are now all hiding out in an old restaurant so both Batman and the cops do not find them and they decide to team up for the betterment of them all.  And last but not least, Batman is continuing his mission of trying to keep the streets safe with his fading arsenal in what seems to be a losing battle.  The writers of this book continue to paint a grim portrait for the future of Gotham and from a reader’s standpoint, it is fantastic.  To see our heroes and various villains put into positions that they never thought to find themselves in is very refreshing and one of the best storylines going on at DC right now out of any book.  One of the nice things to see in this series is how everyone is getting a little character development out of the story.  Catwoman is becoming more confident than she was, and because of that, even a little more cocky than she was as well.  The villains who are running scared are starting to find that maybe it is in their best interests to put a little trust out there once in a while, even if it is still in their natures to back-stab each other.  Julia Pennyworth, who did not want to believe that Batman was a good guy, is now dedicated to his cause, and the list goes on.  There are a lot of good things happening in this book and it makes the book week in and week out, a very solid read.