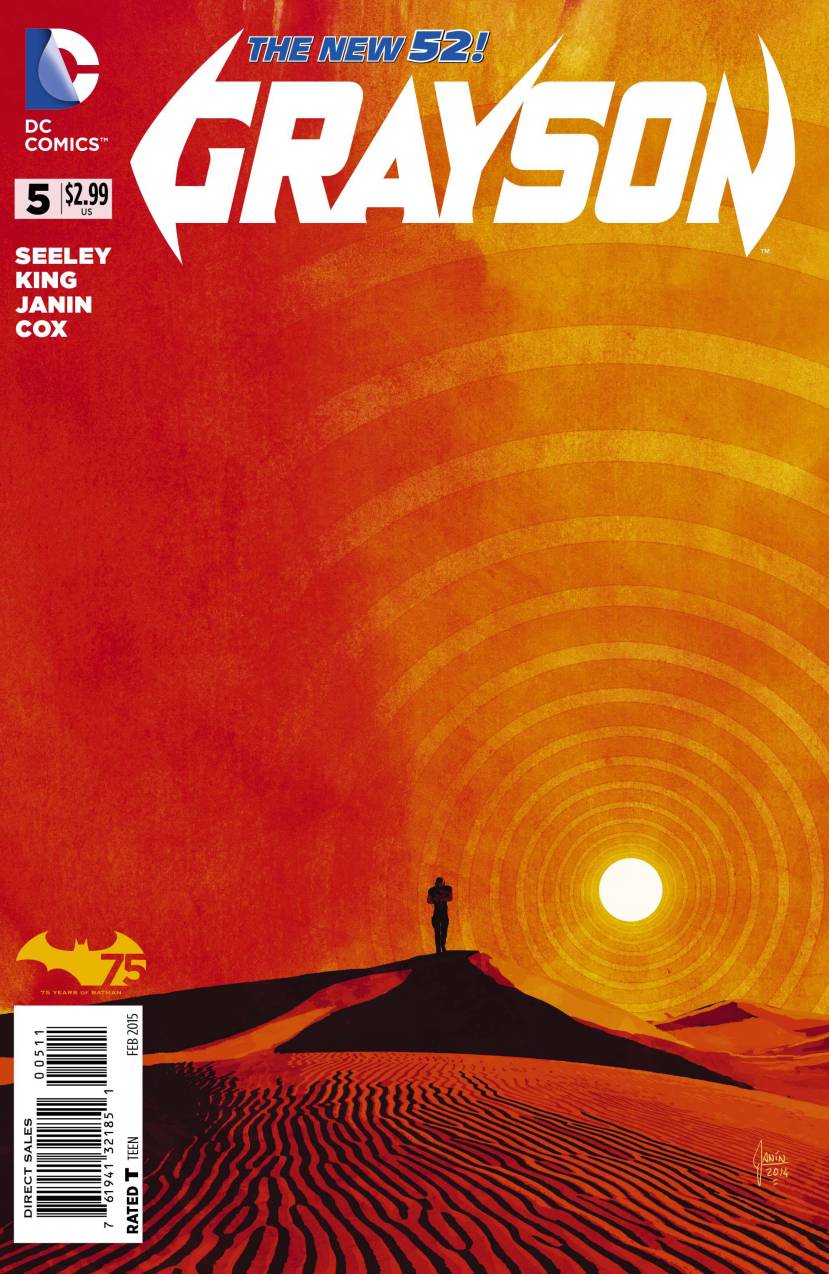 Grayson has been a title that has defied expectations by being an exceptionally well-written and well-drawn book that is not just another Batman title.  This issue continues to prove that by showcasing Dick in a great character study piece that examines a little of what makes the man.  We do not find out the circumstances but somehow, Dick, Helena and Midnighter crash in the desert after successfully delivering a baby on a helicopter, but losing the mom in the process.  Thus our heroes must find a way to survive and somehow keep the child alive too.  The issue is interesting on many fronts, but the first and foremost thing that you see is just how tenacious Dick is.  Like Lawrence of Arabia, the man just keeps going, keeps walking through those scorching sands until he can literally go no more and then still manages to go a bit further.  Secondly, if it had just been himself, he might have stopped long ago, but with an innocent life involved, the man will do whatever it takes to protect her no matter the cost.  Even with the possibility of facing the Midnighter while out in the sands does not stop Dick and when Helena and Midnighter eventually fall behind, Dick clings to life to save life.  Janin’s pencils are as fantastic as ever and though the story calls for little this time compared to usual, he really brings it to life and even makes the reader feel the heat of the sands.  The book, simply put, is one of the best comics being put out today with stories that are consistently good on every level.  To find that DC is able to do such a thing in this day and age is wonderful to see and really gives readers hope that the company keeps trying new things like this book in the future.  Great stuff!

After having his body shattered just like the magical city of K’un Lun was, Danny Rand is on the mend and back to practicing martial arts with his childhood friend Sparrow.  Back in New York, Davos and The One, the people responsible for destroying everything associated with K’un Lun, vow to make a new K’un Lun and they will do it in the Rand building of all places.  Andrews has really taken Iron Fist down a few notches.  Maybe more than a few and it is going to take a lot to get the man back on his feet, not to mention everything and everyone he knows.  In a way, it was fun to see Andrews tear the man down to his most basic self and even exciting, but it will be more so in seeing Danny trying to rebuild everything from the ground up.  How he is going to defeat The One is something else entirely though since Danny is the star of the book, at some point you know he will.  Davos on the other hand should be relatively easy as Danny has beaten the man many times but knowing Andrews, he has not made anything in this book easy thus far.  The artwork continues to be absolutely stunning, whether it takes place in the now or in flashback, and it is nice to see that Andrews change his style up for different sequences in the book lending it a freshness that would have been otherwise absent if he had not done so.  One thing that is for sure though, is that it is great to see an Iron Fist book back on the racks.