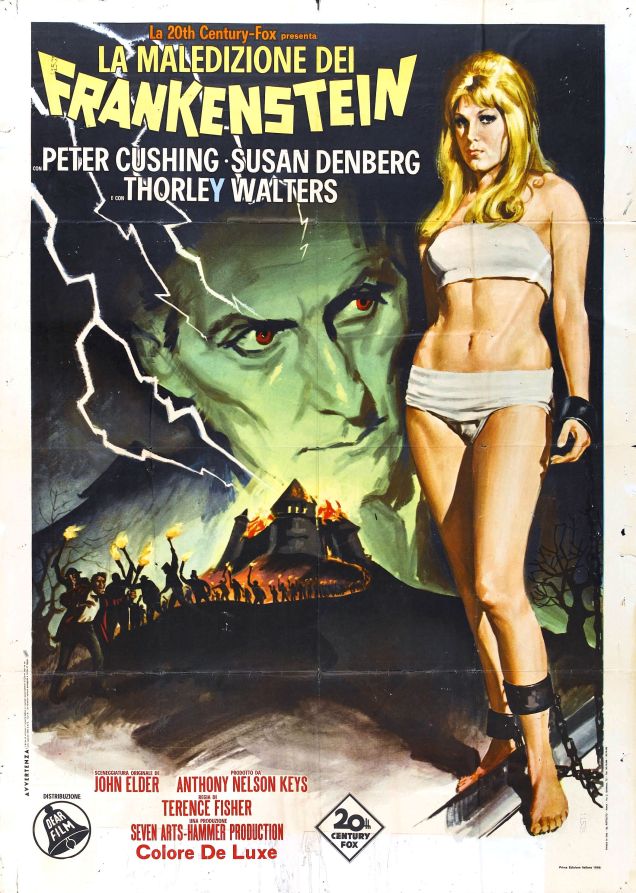 After the strange reboot that was not a reboot called The Evil of Frankenstein, comes this film which was thankfully, much better.  It is a standalone movie, being just another chapter in Baron Frankenstein’s life and one that is not bogged down by continuity.  There is nothing in the picture to say whether it takes place after the second or third film and as such, it gives the movie the freedom to do whatever it wishes.  Peter Cushing returns for a fourth time as Victor Frankenstein, a man who is intent on solving the mystery of life and death.  With this movie, after already creating a method for giving life to the lifeless, the man now turns his gaze to that of the metaphysical, wanting to preserve the essence of a man’s being, that of his soul.

Featuring some of the strangest science ever seen in a film, Cushing uses various mechanisms to accomplish his goal of soul-saving and when he does so, it is represented as a big ball of light.  What is most astonishing, and the most farfetched part of the movie, aside from raising the dead that is, is that Frankenstein is then able to transplant that soul back into a body.  This saving and transplanting of souls are one of the most interesting aspects ever seen in a Frankenstein movie, and one that actually advances the character of the man and his experiments which have so far been limited to the physical world.  Cushing of course is quite excellent as Victor, though it seems as if the man is becoming weary, relying more and more upon his assistants to help him do what he feels he must do.  He is still arrogant and entitled and he still believes himself better than most and it is good to see that the Baron at least remains unchanged in this way. 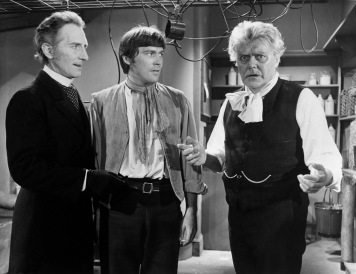 What is most intriguing about this film is not necessarily the story itself, but the subject and how they go about it.  During the picture, the Baron saves the soul of his assistant Hans and puts it inside the body of a recently deceased young woman, who also just happens to be the girlfriend of said assistant.  Just like Dr. Jekyll and Sister Hyde, this film explores the duality of man, exploring the concept that within each person resides a feminine aspect.  With the aforementioned movie, it is represented as a physical being brought about by a chemical transformation.  In this film, the subject is explored as more of a split personality with the souls of Hans and Christina trying to coexist within the same body, yet ultimately failing.  It is exciting to see Hammer try different things in various films such as different types of horror, exploring disparate themes, and portraying other forms of sexuality, aside from that of a man and a woman, at least in the classic sense that is.  And to put them across to the public, it also helps that Hammer examines these subjects within the trappings of the familiar, such as this movie and its title character, Victor Frankenstein.

This film, which is a lot more entertaining and far more engaging than the last Frankenstein outing, was written by John Elder, or Anthony Hinds as he is more commonly known, using the Elder pseudonym quite often.  This is surprising for the fact that Hinds also wrote that last picture.  So how Frankenstein Created Woman can be superior in almost every way possible to The Evil of Frankenstein and how they can be so distinctive from one another is something that has to be seen to be believed.  Where it was almost as if Hinds gave up in the last film, he creates something moody, a little frightening and even original as it adds to the Frankenstein mythos rather than just repeating what has already come before.  Terence Fisher delivers a strong picture because of this writing, though not only for that reason as Cushing, the wonderful Susan Denberg, Thorley Walters and Robert Morris give fairly strong performances throughout.  Denberg specifically was fantastic as Christina, giving the role quite a bit of humanity both before and after her transformation.  The movie was also one that did not feature a monster in the conventional sense, only highlighting men and their monstrous actions.  With Frankenstein Created Woman, it can safely be said it was a step in the right direction for Hammer and the franchise.