Steve Rogers and S.H.I.E.L.D arrive at the site formerly occupied by the Illuminati where he gets a lecture from a hologram of Beast and Doc Green.  Essentially he needs to up his game if he intends to catch them, and that does not go over too well with the former super-soldier.  In fact, everything about the situation, ever since he was betrayed by his fellow members has not settled well within him and thus it is that he finds himself in his current position.  This book continues to provide few answers and more questions, but does so in such an entertaining manner that you find you really do not mind.  The eight month jump might be a little infuriating at times because you so desperately want to know what went on during that missing period and yet the story is so intriguing that you know when Hickman is ready to reveal that information, it will be well worth the wait.  There is a revelation involving Sue Richards in this issue which contradicts what we have been made to believe so far, but in a good way as it was hard to believe that Sue could have been swayed so far from her husband.  Steve’s attitude is so changed from what we know of him, his belief in what is wrong and right is starting to border on madness, and whatever it is that drove him to this point, aside from the brainwashing and destroying other planets, has got to be big.  The book ends on a somber note, but the title is so good, so well written and drawn, the issue could have ended any number of ways and you would still come back for more.  This is definitely one of Marvel’s most consistently well-done titles. 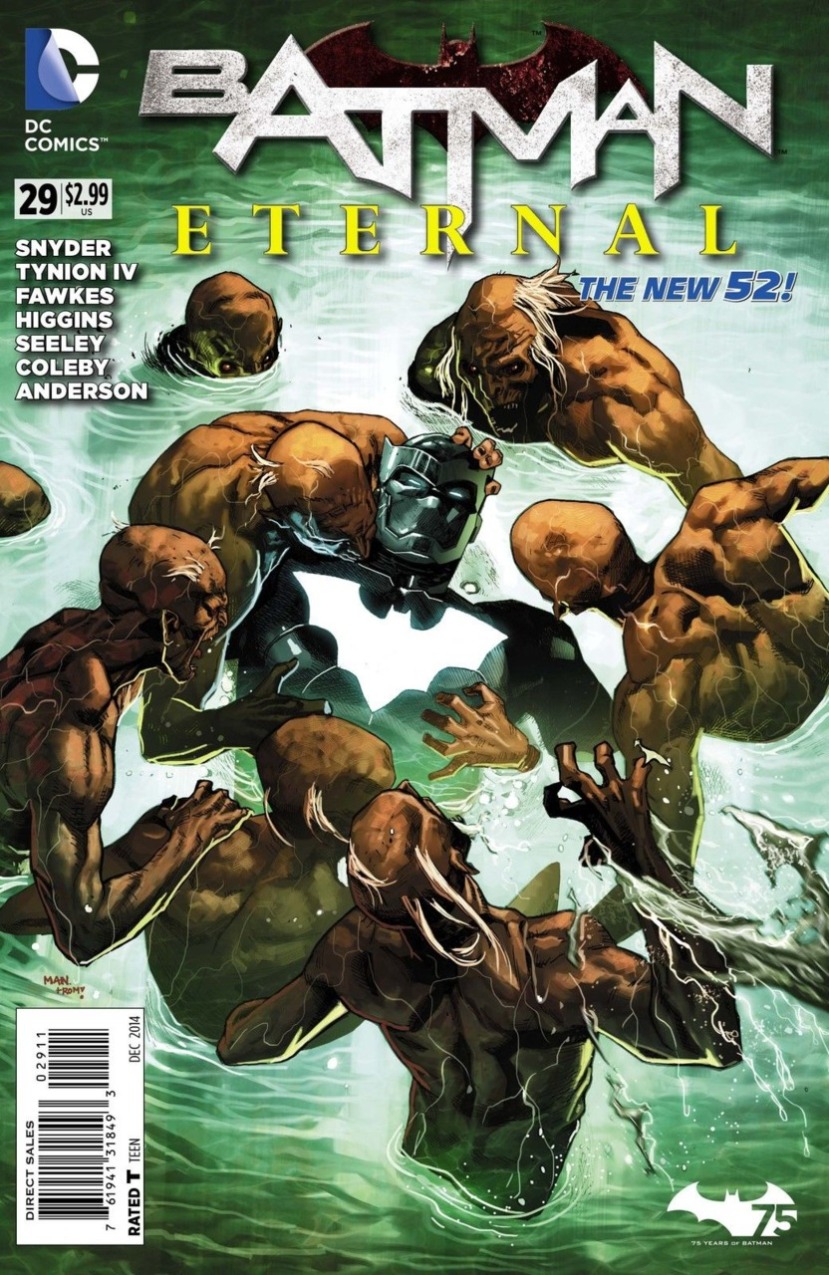 Eternal finally jumps back into the Arkham storyline with a full issue devoted to it.  We see Batwing having an especially hard time of it, but finally being able to report back to Batman about the resurrection of Deacon Blackfire.  Also Jim Corrigan, the Spectre is in a bit of trouble, being sacrificed and all.  This was somewhat of an interesting tale that was  spoiled quite a bit by the release of Arkham Manor this week.  While Manor did not ruin all of the events going on, nor did it go into specifics of any particular event within the Asylum, reading this is almost anticlimactic now which is a shame.  There is some good action going on, and just how Deacon Blackfire connects to Hush should be an engaging little story, so there are some things to look forward to.  Alfred does not look to be any closer to a cure as he is still afflicted by the fear toxin, though again, this particular plotline was also spoiled by Arkham Manor.  If DC had gotten their scheduling right, this issue would have had much more impact than it did.  Still, a good issue but one that just happened to be ruined a little bit by an unfortunate turn of events.