Hammer has made a lot of vampire films over the years, whether because they noticed that was where their bread as buttered, or simply because the films cost less to make.  More than likely it was probably for both reasons as the studio was always keen to save money.  As it was, after The Brides of Dracula was released and before Dracula, Prince of Darkness, Hammer would put out Kiss of the Vampire, an unofficial sequel to Brides, yet not part of the Dracula canon of films.  It is a little bit of shame as it would fit into the same mould as the first two Dracula films before they would change their look and tone with the third one.  So while it may not feature the legendary vampire or Christopher Lee, it does sport a very memorable performance from Noel Willman as Dr. Ravna, the villain and main vampire of the film. 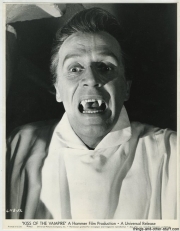 Just like the aforementioned Brides of Dracula, this movie was quite stylish in its set design and cinematography.  It is a striking and bold film, filled with many lavish design elements, the most memorable of which are seen at the masquerade ball.  There are a lot of blacks and whites, pastels and other low-key colours, with only one woman dressed in red, Jennifer Daniel’s character, Marianne, perhaps foreshadowing what is to come for our leading lady.  The opening scene of the movie, taking place at a funeral, is also beautifully shot.  With its sombre and morose tone, an overcast sky and everyone dressed in black, it is only broken by a scream when Professor Zimmer drives a shovel through the coffin and a fount of blood comes pouring out.  If nothing else, Kiss of the Vampire is a beautiful film to watch, and being directed under the expert eye of Don Sharp, he brings it to vivid life. 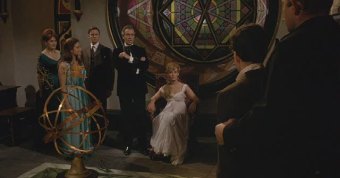 Edward de Souza who plays Gerald Harcourt and husband to Marianne does a fine job as the oblivious leading man, unaware of what is going on around him.  Starring opposite him as Dr. Ravna, was Noel Willman who is just as much a villain as Dracula, though not as physically imposing.  His unassuming manner and appearance almost make for a much more intriguing character as you never see him coming.  Perhaps Harcourt can be forgiven for his unawareness, as Ravna is a very deceiving scoundrel.  Equally villainous, but even colder in his portrayal, is Barry Warren who played Ravna’s son Carl.  At times the man seems incredibly disinterested in what is going on about him, but when he has something to do, he does it without question like leading our poor Marianne to her doom.  Aiding our reluctant hero in this film is Clifford Evans as the tortured Professor Zimmer, a man who has lost a daughter and is determined to be rid of the vampire menace.  Aside from Willman, Evans stands out more than anybody else, his character far more interesting than the bland Gerald Harcourt, or even the belle of the film, Jennifer Daniel.

Despite the film’s lavish production, its good direction, script and performances from most of those involved, the plot is not the most original ever seen for a vampire movie and the film does drag a bit, particularly during the first half of the picture.  Once things start happening though, the film does pick up and becomes quite entertaining.  To say the picture is underrated is a truth that many people are unaware about.  It is a very decent movie from all that was previously said, but it is one that most will not even think about when they think of Hammer and the vampires associated with them.  When you reach the end of the film, it is one of the better endings ever seen in a Hammer film and is absolutely fantastic in its energy and horror, but having been sandwiched between two Dracula films, and being just another vampire film among a sea of vampire films, standing out becomes hard.  The film does manage to stand on its own two feet though and it is a nice entry into Hammer’s vampire annals, one that will make for a nice way to pass an afternoon if you should need something to do.