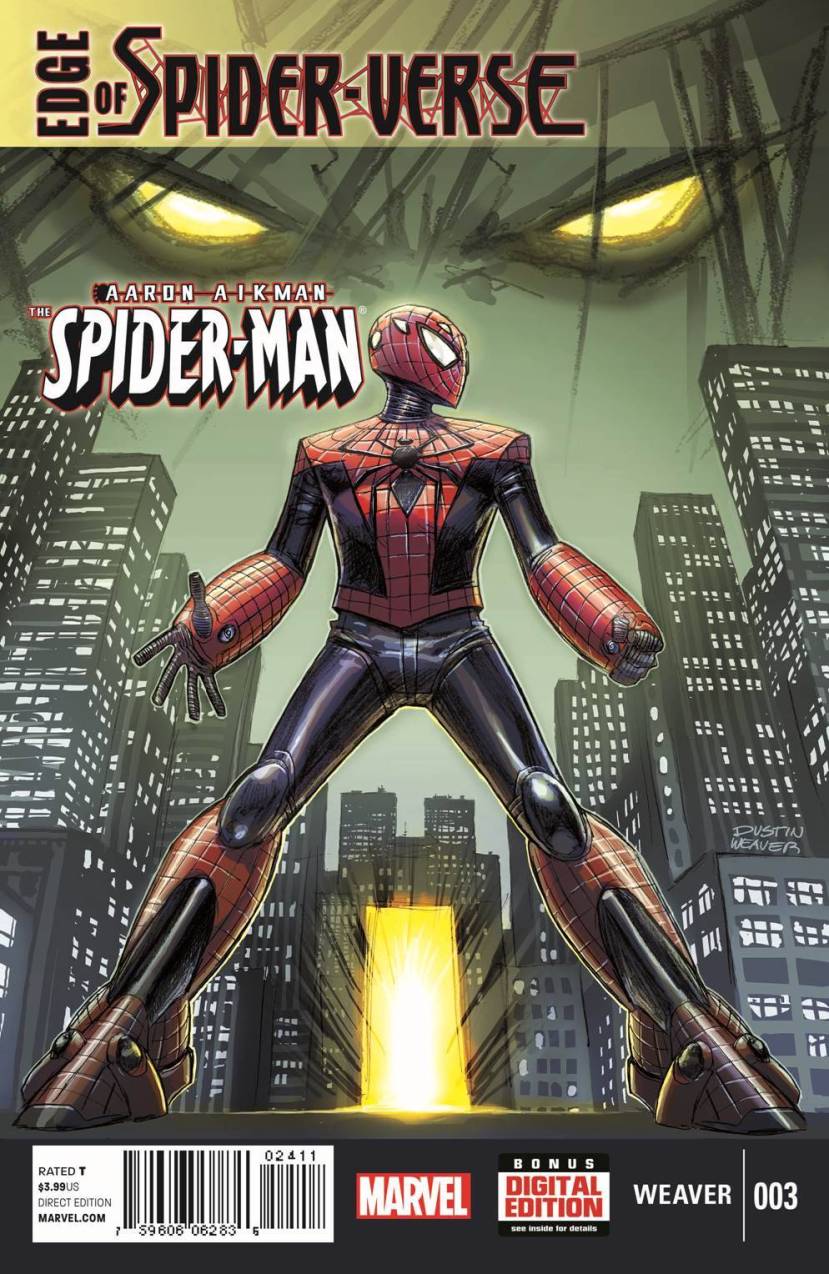 The third issue of Edge of Spider-Verse introduces the reader to yet another alternate Spider-Man named Aaron Aikman, and one who is just as different, yet just as similar to all of the previous incarnations we have met.  His suit is different, having more tech due to him being a scientist and his powers were not happenstance as he injected himself with a serum to resequence his own DNA.  Aaron is in love with Kaori, but she has been preoccupied with curing her daughter who was in a terrible accident.  And while Aaron was trying to help her for the longest time, Kaori pulled away and soon Aaron would focus upon his Spider-Man activities more and more often.  But Kaori has a secret and it has to do with his enemy Naamurah and when it comes to light, it will either bring them closer together or drive them further apart.  It has been hard to determine exactly which Spider-Verse issue has been the best so far, but they are all so different it makes it almost impossible.  Weaver gives us some very likeable characters and his artwork is absolutely brilliant.  The intro to the book feels like the introduction to the Incredible Hulk television series with Bill Bixby and you can hear that familiar music playing as you are reading that first page.  Another great bit was the villain biographies made to look like the old Marvel Universe trading card series of the 1990s.  These added little bits really show us some of the influences Weaver must have had while growing up and/or he is just being awesome for awesome’s sake.  What was also nice to see was that Weaver went with all new and original characters instead of just variations of the same and how in the space of a single issue we were able to know and care about them.  This was another fantastic entry in the series and whatever comes next has a lot to live up to.

Aquaman and the Others Futures End #1

Continuing from Aquaman Futures End, this issue picks right up with Atlan, the newly resurrected sea-king attacking The Others upon their boat and claiming some of his amulets back while Aquaman sits in jail.  Back on Atlantis Island, The Others fend off an attack by the Atlanteans until Atlan shows up there as well.  Soon the battle heats up and The Others take a fatal loss with Aquaman finally joining the battle.  Soon the fate of those who live beneath and above the ocean rests in the hands of a single man and an uneasy peace is brokered.  Dan Jurgens wraps up this little two-part tale with some solid action taking place from cover to cover.  It was not as exciting as the first book as it had more suspense and tension in it, which more than likely was because it was the setup for this book.  Jurgens introduces a new character by the end of the issue and while it was somewhat interesting, this new hero will most likely never be seen or heard from again outside of the Futures End series, if he even shows up in the weekly book at all.  The book was good in the fact that it showed us some of the ramifications of what happened to the oceans during the big war that took place, but aside from that, there was not a lot to be terribly excited about.