Unlike its predecessor, Dracula from 1931, this film would start out with a much lighter tone, comedic in fact, which would set it apart from the first one in more ways than one.  A key element missing from this picture would be Bela Lugosi, the man who originated as the Count and was an essential element in jump-starting Universal’s successful foray into the horror genre.  It was not as if Bela could not have returned in a sequel, after all Boris Karloff and Colin Clive had recently done so in Bride of Frankenstein, but he was afraid of being typecast in the role, of which he was, and would be until the end of his days.  There would be very few men in the history of cinema who would be so closely associated with one of their characters, and very few that could escape them which Lugosi would not.  Even without the man, Dracula’s Daughter would manage to stand on its own two feet and entertain as well as scare audiences just as the first one would. 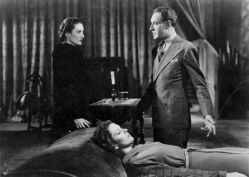 The film finds Countess Marya Zaleska, claiming the body of her father, the one and only Count Dracula.  She thinks that by burning the body, she can be free of his curse, to which she finds she is not.  She seeks out the help of Dr. Jeffrey Garth, a psychiatrist, who thinks that with proper treatment, people can overcome their base desires.  But no matter how abhorrent she thinks her behaviour is, the Countess cannot stop killing and when a young woman turns up on the streets, raving about a woman and with a great loss of blood, Professor Van Helsing gets involved.  Soon enough, Countess Zaleska is holding Garth’s girlfriend Janet captive and wants to turn Dr. Garth into a vampire so that he might remain with her forever.

In the absence of history’s most famous vampire, Gloria Holden steps into the spotlight as Countess Marya Zaleska, his daughter.  She plays the role fairly somber and straightforward, often seeming morose and depressed, assumedly at being cursed, alive as a vampire, or both.  While filming the movie and at the time of release, there was some concern about lesbian overtones in the film, and so, much was done to quell those rumblings.  It is to Holden’s credit as an actress and the intensity she gives her performance, that not only puts those overtones across whether intended or not, but that of her suffering and wanting her curse to end as well.  It is said Holden did not even want the role at first, but being under contract to the studio, obligations had to be met and thus she would play the Countess and do so convincingly.  In all of the films that were to follow, her character would not make a return, much to Holden’s relief most likely, as her movie death had a finality to it.

Edward Van Sloan is the only holdover from the previous film, reprising his role as Professor Von Helsing.  He is not as comical as he was in the first where he lent a bit of brevity to a film that had little light amongst the dark, instead he would become the voice of reason amongst the madness.  Otto Kruger who starred as Dr. Jeffrey Garth, the protagonist of the film, did a fine job, though he was a little stiff at times in his portrayal.  The chemistry between Kruger and Marguerite Churchill who played Janet was fantastic though and really made him much more likeable than he would have been otherwise.  Churchill herself was a bright spot in the film, lending not only her looks and talent, but a little joy to the movie which would break up the seriousness of it.  This would be the only Universal monster film Kruger would find himself in, avoiding further sequels unlike Van Sloan who returned for this one.

The film which was written by Garrett Fort and based on not only the novel Dracula, but the short story by Stoker entitled Dracula’s Guest, hit all the right spots except for the beginning sequence which felt oddly out of place with its lightheartedness.  Perhaps he was trying to ease the audience into a state of complacency before the chills and the horror hit, but it still did not seem like a good fit for the opening.  Directed by Lambert Hillyer with cinematography by George Robinson, the film would look beautiful as it moved from scene to scene, especially those with Zaleska in them as she was always the focal point no matter what surrounded her.  Unlike Dracula which had no score, this film would feature music by Heinz Roemheld and was in stark contrast to the original movie.  Whereas Todd Browning would use silence to increase dramatic tension, here music would be to great effect in helping guide your emotions to their inevitable end point.

As the first sequel to Dracula, the film did a good job of furthering the myth, even without the man present.  Thematically it would follow along the same lines as Dracula, with its look at good versus evil, but also that of nature.  It would see Zaleska fight against herself, but in the end giving in to what she was, and as a vampire, drinking blood is not something she could avoid doing.  The film would also be much different than the first, not only in cast and crew, but in the way the film would ultimately be delivered.  With differences in direction, music and more, it did give a nod here and there to the original with Van Helsing making reference to past events and the Countess repeating Dracula’s famous line about not drinking wine.  Of course her delivery lacked the ominous tones that Lugosi infected it with, but it was great to hear nonetheless.  The film would mark the last appearance of Dracula’s daughter, and though he would not be in the film, it would not be the last of her father.  Though it would not be the last, Dracula’s Daughter is a good-looking and well-acted film, the best of the sequels in the franchise.