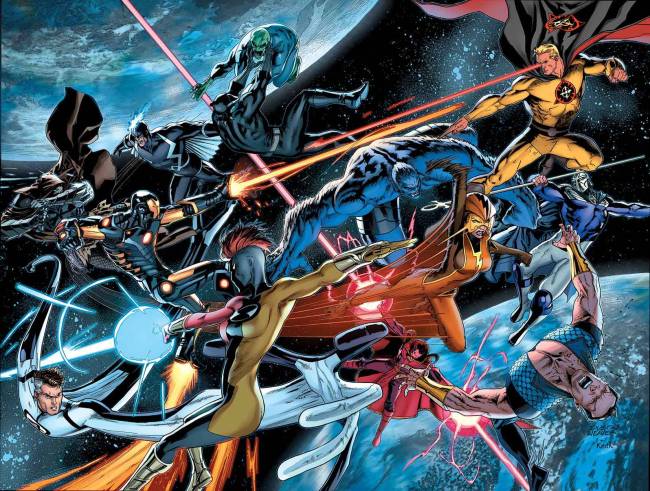 The Illuminati and The Great Society finally meet face to face and it is for a conversation that neither side wants to have.  Their respective Earths are facing incursion with each other and they must decide which Earth it is that must be destroyed.  Not a pleasant topic by any means and when things do not progress as well as they should, it is Namor who takes the matter into his hands believing that there can only be one outcome.  While this is all going on, Maximus is up to no good and has drilled a hole into the prison that holds Thanos and his followers, specifically to see what happens with Corvus Glave, for what reason still remains to be seen.  Hickman continues to weave his opus of alternate realities and planetary destruction with a confrontation between two titanic teams who want the same thing but at an immeasurable cost.  Namor is spot on with his brashness and it might just cost the 616 universe a planet if The Great Society overcomes.  Black Swan is still as intriguing and infuriating as ever, but still one of the most interesting characters to come out of the title in years.  Some people might find the book a little confusing as Thanos has been appearing elsewhere while here, he is still trapped in his prison.  Those worries are inconsequential as Hickman always has a plan and everything will come together and make sense in the end.  This was a fun and exciting story with what looks to be an explosive battle to look forward to next issue. 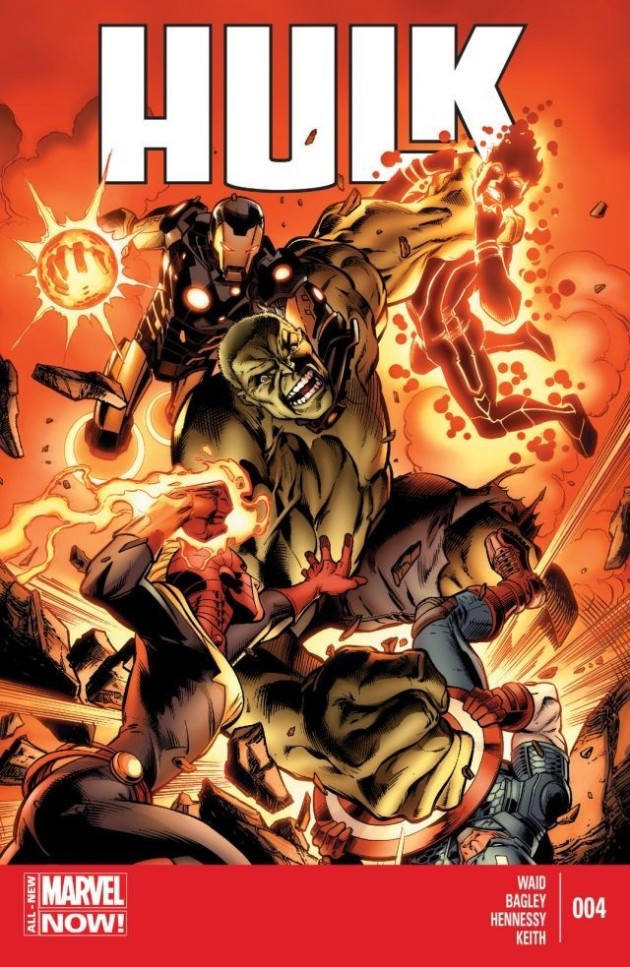 Hulk finally defeats the Abomination clone with the help of the Avengers, Maria Hill is on Cap’s naughty list and Tony thinks he can help fix Banner’s broken mind all in this issue.  Waid has done an overall good job on his tenure with the Hulk, but it has had more middling stories than those that were up or down.  Sometimes the stories are thrilling and at other times they are tedious with the current arc being somewhat better than most.  Banner losing his mind is something that has never really been looked at before, at least in this manner and it provided an interesting reality where we could have ended up with no Hulk at all (aside from the red one).  Bagley’s pencils were nice and slick and it is good to see him on the book as the last run on the title was very inconsistent and everyone knows Bagley can keep a deadline.  With Mark Waid’s run being cut short for whatever reason, this issue wraps up the storyline nice and neat, but leaves it on a little bit of a cliff-hanger that will hopefully be addressed by future author, Gerry Dugan.  Who Shot the Hulk was a good story, but ultimately did not seem to reach the potential it aimed for as it felt like there was a bigger story in play that was not told and with a quick fix in the end.